Here’s a script with so many ideas going off at different tangents that the resultant film struggles to do justice to any single one of them. It’s scarcely aided by a by-the-numbers score which robs most of the better scenes of any impact they might otherwise have had, turning the whole thing into homogenised Hollywood fodder. Perhaps it would have been better as a television mini-series or a novel, both of which formats might have allowed for less linear plot and exploration of several different ideas.

Marshall (a wooden Henry Cavill) lives apart from his wife, scarcely seen, and their daughter Faye (Emma Tremblay). The reason for their separation is, he can’t reconcile with family life his job as a detective hunting sex killers. If you’re wondering about the UK title, at one point he says that he hunts people who live in the dark whereas his daughter represents the light. Meanwhile, Cooper (Ben Kingsley) uses the teenage Lara (Eliana Jones) as bait to castrate pedophiles thus preventing their re-offending. When a car accident lands Cooper in police custody, his tracking device on Lara leads the police to capture serial sex killer and multiple personality Simon Stulls (Brendan Fletcher). However, that doesn’t stop further atrocities being committed… 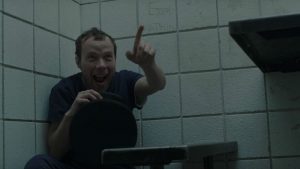 To boil the film down to the essence described above, a lot’s been left out. For a start, much onscreen time is given to Marshall’s several police colleagues, notably psychological profiler Rachel (Alexandra Daddario) who is the second lead. She performs many interviews with the arrested Simon in a police interview room and even becomes his kidnap victim towards the end. There’s the merest hint that she and Marshall have had some sort of personal history together, but this is never really developed.

Marshall’s other colleagues include his superior Commissioner Harper (the ever-charismatic Stanley Tucci who consistently lights up the screen whenever he appears). Then there’s the fact that as well as his internal multiple personalities (spoiler alert) Simon the killer also has a real life, identical twin brother (Brendan Fletcher again). And Rachel unearths archive videotape footage of the brothers’ suicidal, rape victim mother Amy (Carlyn Burchell). 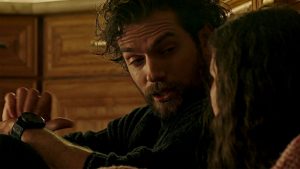 Frequent (attempted) emotional crisis is coupled with scenes of Marshall with Faye or Cooper with Lara to suggest treacly family values. Which seems a weird value to affirm given this is a cynical action movie about cops and vigilantes hunting sex murderers. Who exactly did the director or producers (of whom more shortly) think their audience was? Elsewhere, the film tips the viewing audience off about a car bomb about a minute before it happens for reasons of ineptitude rather than suspense. A woodlands hunt / shoot out / fight scene near a frozen lake towards the end threatens to be truly gripping until the clichéd music score kicks in and destroys the tense atmosphere. And so on.

In other words, this is a mish-mash, mostly no-good movie. You’ll get little idea of how all over the place it is from the promising-looking trailer. Solid camerawork plus halfway decent acting by Tucci, Kingsley and others can’t save it. No surprise that it has 34 listed producers of one sort or another (over 20 of them executive producers) – it feels like numerous different films vying for space rather than any single, unified vision.

Night Hunter is out in the UK in cinemas and on digital HD on Friday, September 13th. Its original title in the US was Nomis. It’s on VoD in April. Watch the film trailer below:

As a young woman hangs out with her gangster boyfriend and his entourage on the Turkish coast, a mixture of sex and violence is never far away - English-language Danish production is now available on VoD [Read More...]