"Dirty gem"
Homophobic coach has to grapple with loud and frivolous gay polo team, in this well-meaning and entertaining French comedy - on VoD on Monday, January 13th

Matthias Le Goff (Nicholas Gob) has done a silly thing. Guilty of a homophobic remark in public, with Twitter having gone ballistic and social media ablaze, the French Water Polo Federation feel that it has absolutely no option but to sack him, leading water polo trainer though he is. What is he to do? He must find some training position but the only team available is – guess what? – a gay water polo team. Despite the reservations of the most politically correct member of the team, Joel (Roland Menou), they decide to take Matthias on, hoping that he will improve their performance.

Matthias has his work cut out. He has stumbled on one of the most ditsy, camp and frivolous group of gay men you could ever meet. Playing silly camp games by the poolside, he wonders whether he can ever sort this lot out. An encounter with a lesbian water polo team (called the “Lumberjacks”) hammers the Shiny Shrimps and they are supposed to be going to a major international gay water polo event in Croatia. Never mind, Matthias’s daughter Victoire (Maïa Quesemand) thinks they are funny and cool, and he sets about licking them into shape. 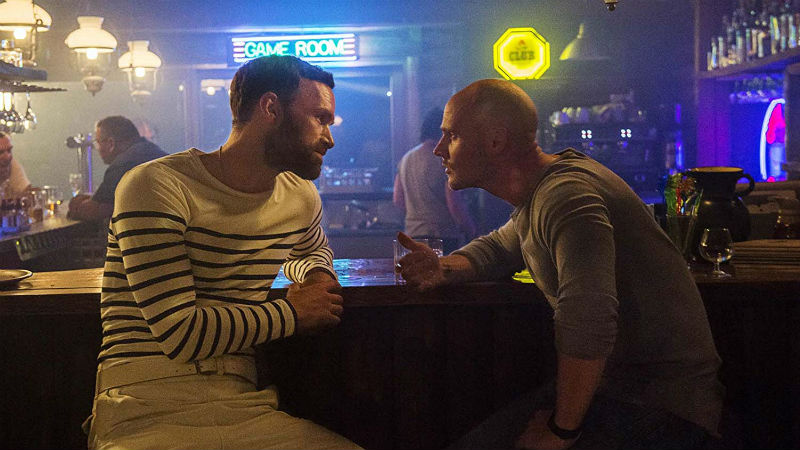 In the course of training, Matthias discovers that their captain Jean (Alban Lenoir) is, in fact, fighting cancer and is so dedicated to the sport that he forgoes treatment to lead the team. This impresses Matthias. This is the sort of dedication that Matthias has (in fact, it is endangering his marriage) and he admires Jean. This movie shows Matthias’s journey from being a rather predictable homophobe to realing that these group of gay men are struggling with life, just the way he is as a father and husband.

In a moving scene in a German bar, at which the team stops off on its way to Croatia, Jean outlines to Matthias the lives of different team members and the struggles they each have. Cédric (Michaël Abiteboul) is trying to cope with being a new father and feels quite lost in the process like so many fathers, Damien (Romain Lancry) has been virtually adopted by the team, having been abandoned at birth, Joel (all politically correct and left wing) is not pretty and is getting more and more bitter as he ages, Xavier (Geoffrey Couët), the team slut copes with a series of STDs, Fred (Romain Brau) is transitioning somewhere along the line to being a woman and sweet, innocent Vincent (Félix Martinez), was chased out of his village when it was learnt that he prefers boys. In other words they are all just like Matthias, trying to cope with life in often difficult and trying circumstances. 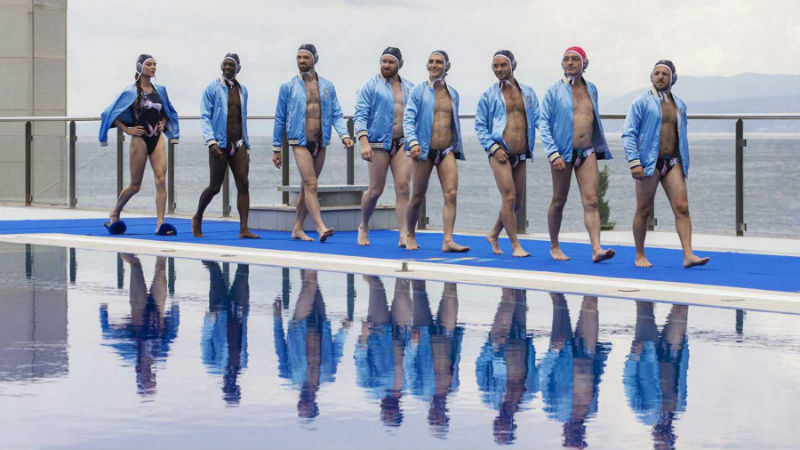 So the movie develops amidst a series of escapades across France and Germany and into Croatia until they reach the Gay Water Polo Games. The serious minded and the very politically correct may find this movie less than satisfactory. The characterisation is often very stereotypical, and the plot development can be a bit clunky at times but and, this is the main and very wholesome point of the film, it is best to get on with people and accept them for who they are, even if they appear incomprehensible.

This is as close as you get to Ealing Comedy meets Priscilla, Queen of the Desert (Stephan Elliott, 1994), meets Some Like It Hot (Billy Wilder, 1959). Gay boys have got to have fun and there is lots of fun and laughter, as well as important serious moments Joel stops the bus transporting the Shiny Shrimps in Germany and informs the team that they are only a few kilometres from Dachau, where many gay men died just for being gay. This trip is a painful reminder that not accepting other people for their differences can be deadly.

The Shiny Shrimps is out in cinemas across the UK on Friday, September 6th. On VoD on Monday, January 13th (2020)