"Filthy genius movie"
When extraterrestrial pulses threaten to destroy life on Earth, a man must travel into space to confront the suspected perpetrator: his father - now available on VoD

Major Roy McBride (Brad Pitt), under constant psychiatric evaluation to check he’s still up to the job, must journey first to the Moon, then Mars and finally to a space station at the far reaches of the solar system to stop his father Clifford McBride (Tommy Lee Jones), a hero explorer officially declared dead having disappeared who is unofficially believed to have turned rogue. Power surges emanating from the vicinity of his father’s last known position are causing severe disruption to and may eventually destroy all human life on Earth.

That’s the essence of James Gray’s simple story, fundamentally a father and son tale with shades of Apocalypse Now (Francis Ford Coppola, 1979). The film was written in collaboration with Ethan Gross, and the images of space travel and tech hardware are effectively realised.

The father was the leader of an expedition called The Lima Project to make contact with extraterrestrial life, a cause about which he was passionate. Because you already know (from the trailer, below) the father is played by Tommy Lee Jones, you also know he’s going to appear at least in flashbacks, comms messages and imaginings inside the hero’s head if not in the main, real time narrative. 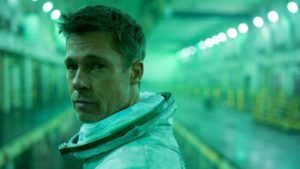 The son is an isolated, self-centred individual. He’s away from home most of the time and his partner (played by Liv Tyler) scarcely gets a look in – either in their relationship or, indeed, in the film itself. And he needs to be isolated and self-centred in order to complete the mission on which he’s been sent – and of which he wryly observes at one point, “they’re using me”.

The Earth – Moon – Mars – father? trajectory is the main narrative spine. Roy travels with a series of different companions and ultimately alone as he heads towards whatever awaits him at his journey’s end. The episodes en route to and at the Moon in particular recall 2001: A Space Odyssey (Stanley Kubrick, 1968) although given that film’s lengthy prehistoric apes opening, some may consider Gray’s narrative narrower in scope.

Roy’s first companion is Colonel Pruit (Donald Sutherland) who travels with him to the Moon. Pruit knew Roy’s father and is one of the few people briefed with full details of Roy’s top secret mission. The octogenarian Sutherland plays Pruit as an adviser and guru, a substitute father for Clifford who left home on his one-way mission when Roy was a teenager.

Mars base supervisor Helen Lantos (Ruth Negga, just as good here as she was in British indie outing Iona, Scott Graham, 2015) later delivers him to the launchpad for the final leg of his journey after he fails a psychiatric evaluation. 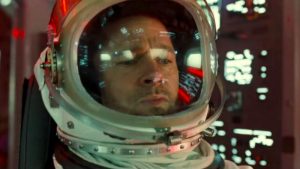 The spectacular, opening action set piece has an interplanetary pulse cause an explosion on a huge man-made structure in Earth’s upper atmosphere. Roy falls off, perilously plummets towards and ultimately parachutes down to the planet’s surface. The threat facing the Earth and our hero’s ability to perform calmly under extreme pressure are both clearly discernible.

That tension is felt throughout the film which, as lovingly lensed by Hoyte Van Hoytema the cinematographer of Interstellar (Christopher Nolan, 2014), varies between vast shots of space, ships and interiors that you’d expect in a film like this and intense close ups of Pitt plumbing the psychological depths of his own inner space and spirituality. On a digital IMAX screen, which is highly recommended for full appreciation of this particular movie, both sets of Ad Astra’s images prove spectacular.

It’s light years away from superficially similar space travel sci-fi which recently played cinemas Aniara (Pella Kagerman, Hugo Lilja, 2018), about an enclosed society coming to terms with the vastness of space rather than a single individual doing so. 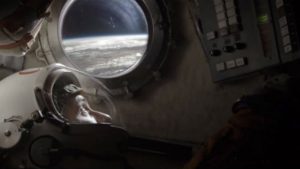 Ad Astra delivers further full blown action sequences for those who want that sort of thing – a multiple Moon buggy battle inspired by the Mad Max franchise (George Miller, 1979, 1981, 1985, 2015), a distress call from a seemingly lifeless vessel complete with subsequent shocks comparable to Alien (Ridley Scott, 1979) – although the film seems both more on track and more original when, for example, lone hero Roy must negotiate a series of underground tunnels to perilously board from below via its rocket thrusters a NASA style space rocket on its Martian launch pad. There’s even a passing nod to Gravity (Alfonso Cuarón, 2013) when he travels through an asteroid belt in nothing but a spacesuit and a makeshift, handheld shield.

Further originality can be heard in Max Richter’s eerie, atmospheric score – a very different proposition from either the classical music selection in 2001 or Hans Zimmer’s pounding electronics in Interstellar – which perfectly fits the film’s double themes of the vast emptiness of space and the dark depths of the human soul.

There are many reasons why you should watch this fascinating sci-fi flick. Leaving aside the considerable twin pleasures of seeing ageing legends Sutherland and Jones acting on separate occasions in close up on an IMAX screen, not to mention Negga’s impressive turn, there’s also Pitt’s impressive portrayal of an isolated individual coming to terms with his absent father. At the same time, as a space exploration epic it compares favourably to both 2001 and Interstellar with special effects, cinematography and score to match. Altogether, a magnificent piece of work.

Ad Astra is out in the UK on Wednesday, September 18th. On VoD in April. Watch the film trailer below: