This film spends most of its running length inside an unnamed Mexico City hotel (actually the real life Hotel Presidente). There are scenes with views of the skyline from glass windows mostly on either the 21st or 42nd floors, including a running gag about lowering the blinds to shut out the prying eyes of the amorous window cleaner on his platform outside, ultimately paid off when the title character leaves the blind up, sits on the bed and strips off down to her knickers.

This scene is uncharacteristic of the film as a whole, in which chambermaid Eve (Gabriela Cartol) quietly and dutifully goes about completing her daily workload tidying, cleaning and replenishing items in guest rooms on the 21st floor for which she is fully responsible. To do this, she must leave her home at 4am to get to the hotel by 6am. We never see her home, but we learn that she takes showers at work because her home doesn’t have one.

Eve conscientiously hands in personal effects left behind by departed guests. These include a red dress which she covets and for which she has put in a request should the owner fail to reclaim it within a given time and about which she periodically asks both lost property and her boss. She’s an undeniably hard worker whose loyalty is in part retained by her employers’ dangling in front of her a promotion looking after the recently opened, more luxurious 42nd floor. This promotion is the carrot that keeps her going until towards the end of the film the certainty of her getting the new job looks like it might evaporate with the position going to someone else. 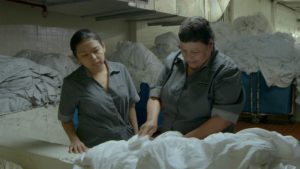 The other thing that keeps Eve going is an adult education class run by the hotel workers’ union (until the class is shut down for reasons never fully clarified) which improves her maths skills and gets her reading a copy of ‘Jonathan Livingston Seagull’. It also helps her make friends with the extroverted Minitoy (Teresa Sánchez), a woman who likewise works as a chambermaid on the 16th floor. Elsewhere in the building Eve is periodically hassled by Tita (Marisa Villaruel) who wants to sell her hand lotion and plastic lunchboxes.

We also glimpse the guests as she works around them. The opening scene features a nightmare mess of a room in which Eve discovers what at first appears to be a body on the floor under some sheets but is quickly confirmed when he gets up and starts wandering around to be a dazed old man who has presumably fallen out of bed. Another man does voice overs for or vocal recorded reports on nature films and consistently demands further quantities of amenities be brought to his room. Argentinian mother Romina (Agustina Quinzi) complains about her lack of freedom and gets Eve to look after her small baby while she takes a shower. Eve has a four year old at home and a friend drafted in to look after then child and it’s hard to believe the well-heeled, hotel guest mother’s life is anything like as difficult. 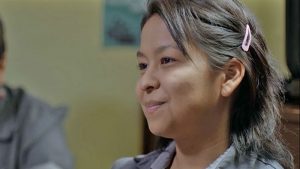 The form of the piece relies heavily on the job of a chambermaid, the camera watching passively in long, unbroken takes as Eve goes about her work in bedrooms, bathrooms and the laundry area. This appears to be grounded in much on location, pre-shooting research by the director because it has an almost documentary feeling of everyday reality about it. And that’s the film’s great asset which makes it so compelling to watch – an entry point into an unfamiliar yet fascinating world which, in turn, takes us inside Eve’s head.

The whole movie, while it must have been scripted, is largely low on dialogue (although Eve communicates with her boss at intervals via walkie-talkie) and feels like episodes may have been moved around a great deal during the editing process. (In terms of its editing it’s among the best films you’ll see all year). For the first hour, you wonder where it’s headed and then the final half hour pushes the piece in some very definite directions. However, it might have been better off without any such attempt at narrative closure, as the more meandering first hour is arguably more satisfying.

The Chambermaid is out in the UK on Friday, July 26th, and then on VoD the following Monday (the 29th). It is special feature at the Cambridge Film Festival in October.