"Filthy genius movie"
Alfonso Cuarón's latest epic is one for the history books, and it deserved every single one of the 10 Oscar nominations that it received - now streaming on Netflix

Overwhelming, confounding, peerless. To watch Roma for the first time is to know that you’re in the presence of something special, an artist at the top of their game, a feat of formalist, analogue filmmaking, the kind of great movie that only comes along once or twice in a decade. It’s a year in the life of a family in Mexico City 1970-71, and particularly Cleo, their maid, as director Alfonso Cuarón takes the opportunity to provide the audience with an experiential roller coaster of set pieces, through high and low society, political upheaval and intimate chamber moments.

This approach has led to critical rapture (including 10 Oscar nominations, tied with the most ever for a foreign language film) but questions have also been raised about the minimisation of a largely silent maid by an upper-middle-class filmmaker. You might find those problems too, but this is a film searching for answers, rather than the open ignorance of your problematic fave. Every time Cleo seems to behave as an organic part of the family unit, by joining in conversation, or sitting with them while they watch TV, it’s stopped dead by someone giving her an order. 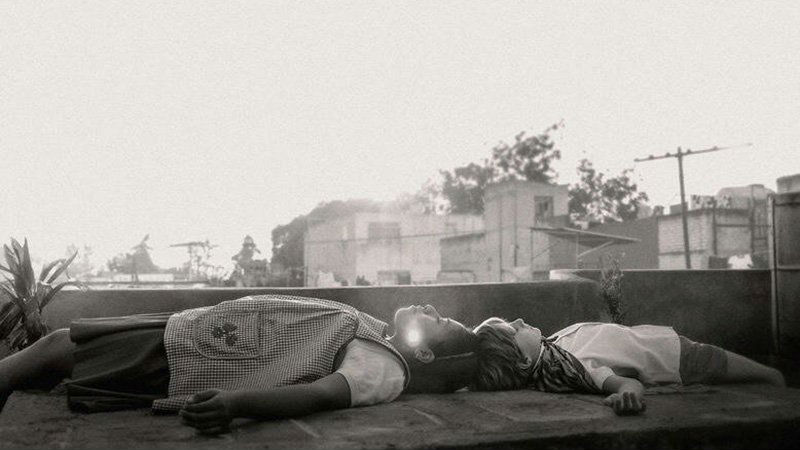 Cuarón never allows you to forget about the master/servant relationship, and that’s the point. Especially when the film’s exploration of Los Halcones and the Corpus Christi Massacre becomes the focal point of the narrative, these contexts of power are revealed to feed into each other. True, Cleo doesn’t talk much, but no one does. And when an outburst does finally come toward the end of the film, it is crushing, snapping Cleo’s entire psychology into place and questioning how much we have actually known about her interior life. Gladly, the Academy has seen enough in what Yalitza Aparicio and Marina De Tavira as the family matriarch do to reward their subtle work.

You have to look at this as less about a particular character than it is about the place, the time, the memory. You might think of Uncle Boonmee Who Can Recall His Past Lives (Weerasethakul, 2010), or Distant Voices, Still Lives (Davies, 1987), how the camera monitors these ghosts as though unbound by time. That distance is the major change in Cuarón’s style. Where he once relied on the Chivo driven, Steadicam heavy technique as means to immersion, here his distance, heavily detailed production design and costuming, and a well-timed cut creates, funnily enough, a stronger bond with the film than those twirling camera moves of his past few films.

And it’s the details that transport the movie into a poetic realm where we really do feel as though we are watching memories projected: like a man being shot from a canon, a car driving through marching band, children at a New Year party running from a man in a bear costume. The cinema scenes grabbed me. Curtains closing on a film as soon as it ends, so the credits still project onto velvet, is a little touch that puts you into the mind of a young Alfonso Cuarón. The director inserts you into his brain by inserting images from his other films, like locations from Y Tu Mamá También (2001) and a clip of an astronaut from Marooned (Sturges, 1969), which nods to Cuarón’s inspiration for Gravity (2013). 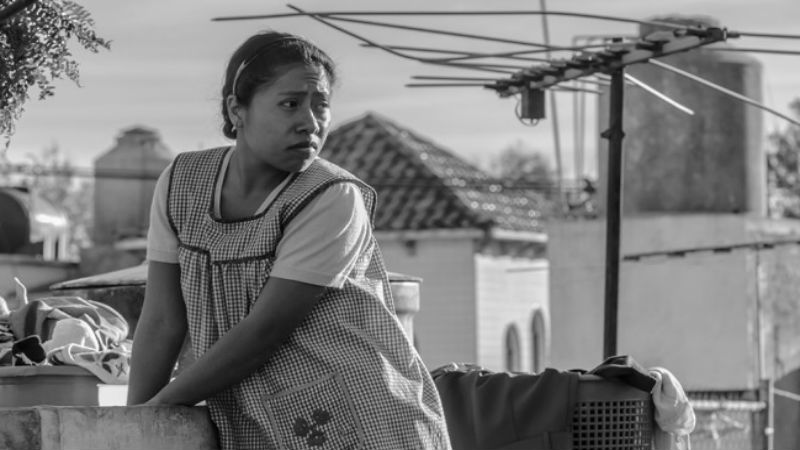 And then there’s the motif of water, from a bucket washing away dog poop to those climactic waves. Cuarón uses them like Woolf did, as a visual expression for bouts of pain and depression. But at times in Roma, water can mea n the very opposite. Because it’s a film of rhymes both visual and audible. The maximalist sound design plays a large part in how we experience and are immersed into this world. The direction is so muscular, it’s a vast undertaking of David Lean proportions where they’ve built full streets and inhabited them to create the most epic experience. That appeals to the Film Twitter bros, and Cuarón always has the tendency to lean into that stuff. But if we accept immersion as his aim, then each moment is imbued with an honest to God purpose that pays off in a way that his other similarly bloated compatriots, ‘The Three Amigos’ do not with their own recent grandiose epics. The Revenant (Iñárritu, 2015) delivers shot after shot of impact, without any camera motivation between shots. The Shape of Water (Del Toro, 2017) is like an episode of Riverdale, empty pop culture references softening the patronising social message. Roma is imposing, it loudly pronounces its cinematic lineage (the Neorealists shout loudest, Fellini and Pontecorvo especially). But it’s the real deal.

I have now seen the film three times: in the cinema, on television, and on my laptop. To complete the cycle, I really need to stream it on my phone, as Cuarón (or at least, Ted Sarandos) intended. I can’t pretend that there isn’t a best way to see it. As with any film, cinema is king. But see it wherever suits you, whenever suits you, just make sure you see it. Because this might be one for the history books.

Roma is available on Netflix and in Curzon Cinemas now!

The dysfunctional relationship between the ailing Frida Kahlo and her Costa Rican nurse Judy is the backbone of this new Mexican drama - from the Tallinn Black Nights Film Festival [Read More...]