"Filthy genius movie"
The bitter mendacity of capitalism: set in Portugal during the European debt crisis, this dirty tale of despondency and complicity sends an urgent warning and a subtle message of hope - watch now on VoD

In the year of 2011 the Troika bailout program was implemented across Portugal. More than 1,8 million families and companies were in debt, and 60 debt collection agencies engaged in immoral practices on the brink of legality in order to coerce and intimidate people into paying. People who simply didn’t have such money. The outcome was confusion, anger, despair and sometimes even tragedy.

The film opens with the Prayer to Saint George: “I will go dressed and armed with the weapons of Saint George so that my enemies, having feet will not reach me; having hands will not trap me; having eyes will not see me, neither with thought can they cause me harm”. It feels almost like an ironic comment on the predicament of the film’s protagonist. Jorge (Nuno Lopes) is an unemployed boxer struggling to support his child Nelson (David Semedo). The mother Susana (Mariana Nunes) is threatening to take the child back to her birth nation, as she too is struggling to make ends meet. 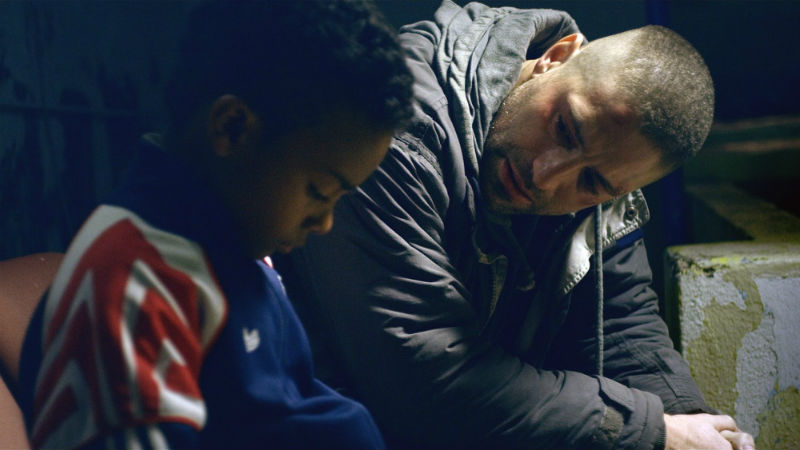 Jorge finds a job in one of the much-feared debt collectors in order to earn quick money and dissuade Susana from leaving the country. He becomes a henchman prepared to use very obtuse elicitation techniques in order to extract money, daunt and terrorise debtors. His bosses often take him to “casual” collection meetings, as the mere presence of the bulky and muscular male is indeed very frightening. But it’s in the dark of the night, when there’s no one around, that the elicitation techniques get sanguinary.

This is a very dark and somber film. The photography is mostly at night, and the camera remains borderline static throughout the movie. There’s an eerie stillness, just like the country’s economy. People often filmed from outside barren and soulless, making them look like rats in a cage and emphasising their helplessness. The neighbourhoods are poor and derelict, an image you don’t normally associate with EU countries. Much of the action takes place in the Jamaica District of Lisbon, which is populated mostly by marginalised black people. It reminded me a lot of the gypsy district in Slovakia of Ulrich Seidl’s Import Export (2007). They are the forgotten peoples of Europe.

Prejudice is also a central topic of the film. Susana is a black foreigner, from a former Portuguese colony (Brazil). She has been consistently accused of being a “nigger whore” and a gold-digger. She is subjected to racism, xenophobia and misogyny. Unbeknownst to Jorge, his father offered her a large sum of money for an abortion, which she refused. Now she wants to return to Brazil, reversing her immigration route. Europe becomes the doomed continent, while the former colony is promising land. A exotic papaya symbolises the longing for Brazil

There is a touch of hope at the end of the film. Despite a very tragic event, the characters seem to find some sort ofredemption and reconciliation through their complicity. It’s as if people they suddenly realised the cruel nature of capitalism. During a crisis, the most vulnerable are often forced to confront each other; those who should be support each other are instead set against each other.

The Troika ended in 2014, and Portugal has since recovered and become one of the most promising economies of Europe. Saint George serves as a reminder that solidarity and compassion should prevail above corporate interests at times of economic hardship. The Patron Saint of England will protect those who remain loyal to their most humane values. Those are the real weapons at such difficult times.

Saint George is available on all major VoD platforms from November 2017, and it is part of the Walk This Way collection.