"Dirty gem"
The hero from Unbreakable and the villain from Split are captured and incarcerated in a maximum security psychiatric facility, and the outcome isn't pretty - in cinemas from Friday, January 18th

There’s an arguably gratuitous sequence at the end of Split (M. Night Shyamalan, 2016) linking it to the seemingly unrelated Unbreakable (M. Night Shyamalan, 2000). Split is about Kevin Wendell Crumb a.k.a. the Horde (James McAvoy), a man with multiple personalities who abducts and kills teenage girls. Unbreakable is about David Dunn (Bruce Willis), sole survivor of a train crash, and obsessive comic books fan with brittle as glass bones Elijah Price (Samuel L. Jackson) who engineered the crash to unearth a superhero. Dunn, it transpires, has superhuman strength and the ability to read people’s thoughts by bumping into them.

Glass makes considerably more sense if viewed as a third film of a trilogy. It relates to Split and Unbreakable in different ways. It starts off with split personality Crumb tormenting four kidnapped girls (from Split) while Dunn (from Unbreakable) goes out walking every day, hoping to bump into the kidnapper and save the girls. Well-meaning psychiatrist Dr. Ellie Staple (Sarah Paulson) catches the pair fighting and incarcerates them in a maximum security, psychiatric facility where Price, the self-styled Mr. Glass (again from Unbreakable), is also held.

The stage is now set for Mr. Glass to engineer a confrontation between superhero Dunn and supervillain Crumb. But for the fact that he’s constantly being administered medicine to keep his highly active and brilliant mind out of mischief.

Jackson is nothing less than superb at keeping you guessing: is this patient really sedated? Or is he playing some kind of trick and just faking it? Similarly, there’s a pleasure watching Willis reprise one of his classic roles from the period of the nineties and early two thousands when from Die Hard (John McTiernan, 1988) onwards, he seemed to be in every other Hollywood action movie on the screen.

McAvoy, although of a much younger generation, is by no means second fiddle to these two. As with Split, his performance, traversing many of Crumb’s 23 alternate personalities including the terrifying, wall-climbing Beast, is breathtaking. This time round, the Beast gets considerably more onscreen time than he did in Split.

Writer Shyamalan throws in lots of highly effective plot devices to keep the audience on the edge of its seat. It’s very much a ‘dangerous characters contained in a holding environment’ type of movie, with each of the three main protagonists restrained in different ways. Glass is sedated and locked up in a building with almost as many security cameras as you find in the average high street in Britain. Dunn’s room can be quickly flooded with water which robs him of his immense strength. And Crumb’s cell is equipped with flashbulbs triggered whenever one of his more violent and threatening comes out, instantly transforming it into another of his inner personalities. 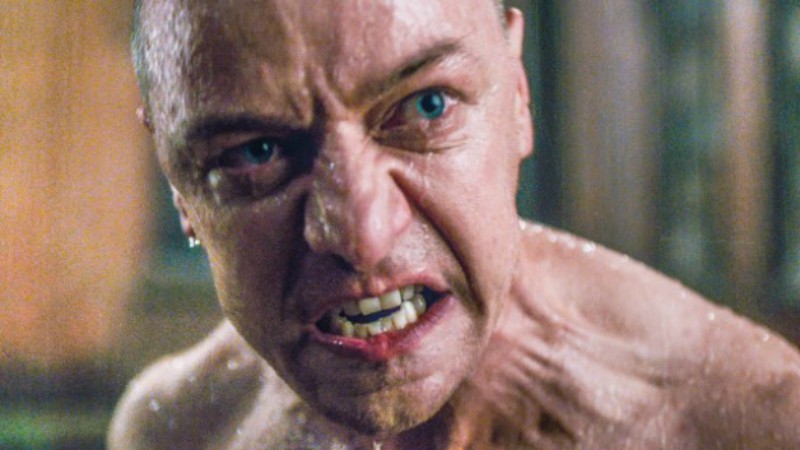 As producer/director, Shyamalan brings back a host of characters (played by the same actors) from the two earlier films. While Anya Taylor-Joy again does an excellent job pretty much taking up where she left off in Split as the final girl who survived the monster, there’s an even greater pleasure in seeing not only Charlayne Woodard play Jackson/Mr.Glass’ mother 19 years after she played the role in Unbreakable, but also and arguably more significantly the 28-year-old Spencer Treat Clark revisit the role of Willis/David Dunn’s son Joshua which he last played as a nine-year-old, complete with flashbacks to Joshua and his dad made up from outtakes that were never used in Unbreakable.

When the nerdy Mr. Glass starts explaining the twists and terms of the plot in terms of comic book narrative and lore, you’d be forgiven for wondering if the world really needs another movie on the subject after the quantity of superhero movies from Marvel and D.C. in recent years. That said, this is more inventive than most superhero movies although you’ll like it more if you watch the two movies which spawned it beforehand. It works well enough as either a third instalment of a trilogy or a post-modern take on the superhero genre.

Glass is out in the UK on Friday, January 18th. Watch the film trailer below:

Second time lucky? Two brothers who escaped from a strange desert cult decide to go back for a second look, which may prove to be their undoing – in cinemas & digital HD on Friday, June 29th and on Blu-ray & DVD from Monday, 2nd July [Read More...]