Our dirty questions to Alberto Sciamma

We spoke to the Spanish director of I Love My Mum, a British comedy laced with sociopolitical undertones, Brexit tropes and jokes about nationalism, plus it's also a picturesque tour of Europe and North Africa - the film premieres at the Cambridge Film Festival

The British-Spanish co-production I Love My Mum is about to premiere at the 38th Cambridge Film Festival, which starts this Thursday. The film narrates the story of a bickering British mother and son accidentally shipped off to Morocco on a ship container and having to find their way back home past Spaiin and France. Our reviewer Redmond Bacon described the film as “a picturesque comedy that doubles up as a grand tour of Western Europe”. Click here for our review of the film.

We took the opportunity to talk to the 57-year-old director from Barcelona, who is now on his sixth feature film, with a career spanning more than two decades. So we asked him about political undertones, nationalism, how it feels to be “from the outside” in Europe, and much more! All the images on this article are from the behind-the-scenes of I Love My Mum.

Redmond Bacon – What was the core inspiration behind the film?

Alberto Sciamma – My own experience, I guess. I always feel like a fish out of water wherever I am. I have always been considered ‘from the outside’ both in Spain, where I was born, and in the UK, where I have lived for many years. That sense of being lost and trying to find a way back ‘home’ wherever that is… I guess that’s me.

RB – Olga and Ron’s journey is similar to that a refugee might take to the UK. Did you want to make any political comment here?

AS – I didn’t want to make a political comment, rather a social one. It’s always there as a background to Ron and Olga, but I wanted them to be blind to it, just as we tend to be. It’s there, we recognise it in occasions, and then go have breakfast…

I wanted to comment on the general attitude. Take the immigrant boat scene for example, in which Ron and Olga want to help rowing. They create chaos by trying to help. They are chucked out of the boat while screaming “sorry, sorry!’. For me, that sums up it all up. 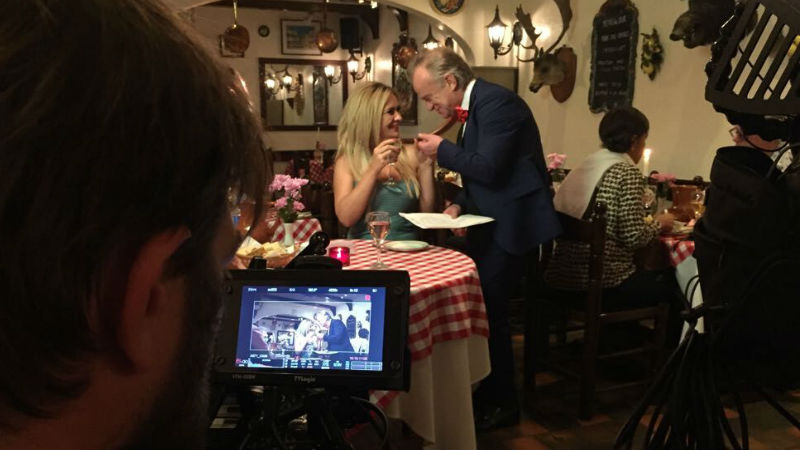 RB – Is it correct to say that the film is also about Brits struggling to communicate in Europe?

AS – Instead of communicating, Ron and Olga just tend to ignore everything. Until a number of accidents moves them forth. They act instinctively, never questioning the world around them. But they never ever act out of badness, they don’t purposely ignore the world, they are just who they are, so there is no judgment.

I see Ron and Olga and both heroic and utterly flawed. Just like everyone else. Well, or at least me. They happen to be British, but they could as well be Spanish just like me…

RB – As the release date is the day after Brexit officially starts, is there another political message here too?

AS – The release date has not been fixed. But of course the discourse about Brexit underlines many situations in the film. The core of that discourse is not exclusive to Brexit, I believe that what is happening in Italy, Catalonia, France etc is at its roots the same bollocks; it’s a nationalist and populist discourse.

The movie looks at that from above and uses it in an absurd and occasionally surreal way, as a comedic pizza base.

RB – Did you look at any other road movies for inspiration?

AS – I’ve always loved Plane, Trains and Automobiles (John Hughes, 1987). But the inspiration wasn’t any other movie in particular, rather all the movies and experiences I’ve had: the good and the bad.

RB – The film has Fish Tank (Andrea Arnold, 2009) actress Kierston Wareing. Did you pick Wareing due to her performance in that film?

AS – Kierston is a force of nature, a fantastic instinctive actress. I loved her in It’s a Free World (Ken Loach, 2007). Seeing that movie nailed it for me. 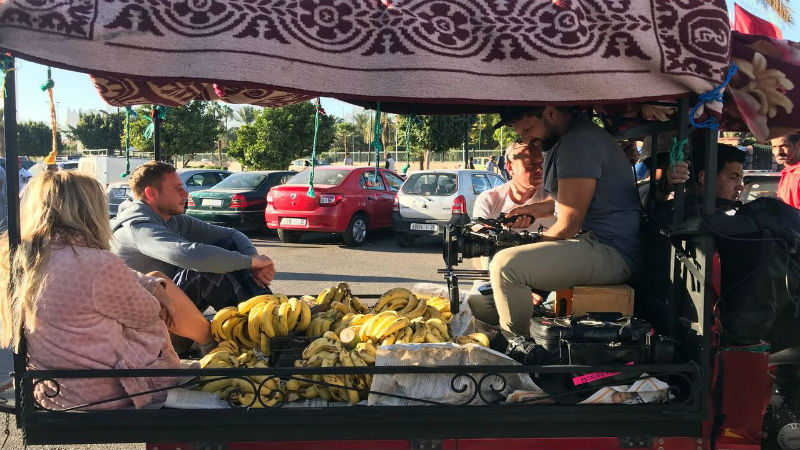 RB – The acting is very naturalistic here, really allowing Wareing and Tom French to shine. How much improvisation did you allow?

AS – They got into their character very deeply, so that made working with them very easy. Tommy French is a natural, very talented and fast learner. He gets it. They were able to shape the script with the improvised style I was after.

The script was followed, and it was shaped by them.

Shooting the movie was nuts, in many occasions we were all improvising and adapting to the locations and never-ending changing situations we encountered. Morocco was particularly nuts, so the actors were responding to the craziness around them, Same with me Paolucci (our DOP) and the rest of the crew.

RB – You have mostly done horror and thrillers before. Why the change to comedy?

AS – I guess all my movies, specially the first one The Killer Tongue (1996) were or had comedy elements, or at least rather absurd stuff. I feel comfortable with comedy. I had previously written a few comedies, and I was desperate to direct one of them. I Love My Mum is that movie. My next movie is also a comedy and also a heist movie, entitled Five Idiots.

In fact, Ron and Olga were born as characters in the script of Five Idiots. I enjoyed so much writing them that I extracted them from that script and dropped them into a blank page… then started writing I Love My Mum. At the start of writing I only knew one thing about their story; they were gonna have an utterly stupid discussion that would put them in a rocket and send them to the moon. After that, the script grew its own body.

British comedy about haggling mother and son accidentally shipped to Morocco humanises refugees and also functions as a trope for Brexit; it's a real delight to watch - in cinemas Friday, May 31st [Read More...]

Do I look regal in this? Belgian king is stranded abroad as his country breaks down, and he has to resort to extreme measures in order to return home, in very clever mockumentary - from the Cambridge Film Festival [Read More...]