"Dirty gem"
In the name of the fatherland? In the late years of the Iron Curtain, a woman has to give up her personal life and even her own body in favour of athletics and the Communist regime - watch it right here and right now!

Get set for both a personal and a political journey. From the moment we enter Irene (Anna Gieslerova) and Anna’s (Judit Bardos) apartment, we are clearly in Eastern Europe during the Communist era. The evocatively decorated surroundings with ‘pull out bed’ and utilitarian furnishings, the drab clothing and simple bread and cheese breakfast immerse us immediately in this world. The country is Czechoslovakia, and the decade is the 1980s.

As Irene switches on the ‘Free Europe’ radio channel, we meet a woman who is willing to risk listening to forbidden news, glimpsing her position on the political system under which she is forced to exist. Mother and daughter share the extraordinary ability of elite athletes, giving them opportunities not afforded to most citizens. Irene, whose husband emigrated when their daughter (Anna) was small, puts all her energy into supporting Anna’s running career holding onto her plan of her daughter making her escape to the West while at the Olympics.

That this plan is not shared with her daughter is a decision that drives her to make extreme choices that are in conflict with her daughter’s wishes. The blurring of the personal and political leaves Irene making decisions that put her and Anna at risk of discovery and imprisonment, something that could ultimately jeopardise her daughter’s chance of escape. She wants Anna to have a chance at a free life, but also wants to cling onto her own principles. 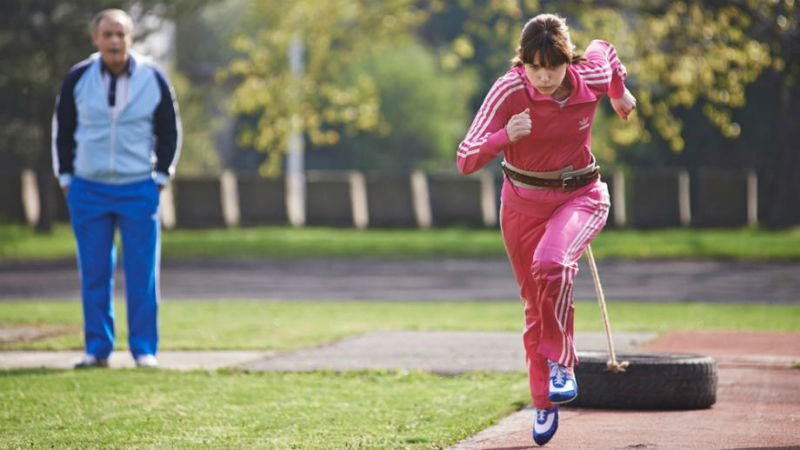 The broader canvas of this story are the dilemmas that the citizens, of a Communist regime that does not do ‘fair play’, are thrust into. Anna and her mother agree to her having ‘Stromba’ injections to enhance her athletic ability. The state’s motivation is to prove that “Communist athletes are the best in the world”, Anna’s coach Bohdan (Roman Luknar) seems to want the best for his students, but is also conspiring with the secrecy of this system to protect his own job in fear of repercussions. Anna signs the agreement for the drugs programme but after being taken to hospital as a result of a collapse, decides to stop taking what she has found out to be anabolic steroids that could make her infertile. The state wants to control her body and potentially deny her the rights over her own reproductive life “everyone is watching me as if I was just muscles and weight” she proclaims.

We see Anna plucking hairs from her nipples and chin and becoming dissociated with her own body. Many of the threads in this narrative serve a dual purpose. The main players and their relationship with the state deeply compromises their relationships with each other. Anna’s relationship with Tomas (Ondrej Novak) illuminates her adolescent awareness of herself as a sexual being and also highlights the ‘class’ system that exists even in this supposedly socialist utopia. Tomas’ family have obvious wealth, displayed for us in the expanse of their apartment. At a crucial moment in the narrative Anna’s inability to obtain a permit to visit her father in West Germany is juxtaposed with Tomas’s family’s emigration to Austria. 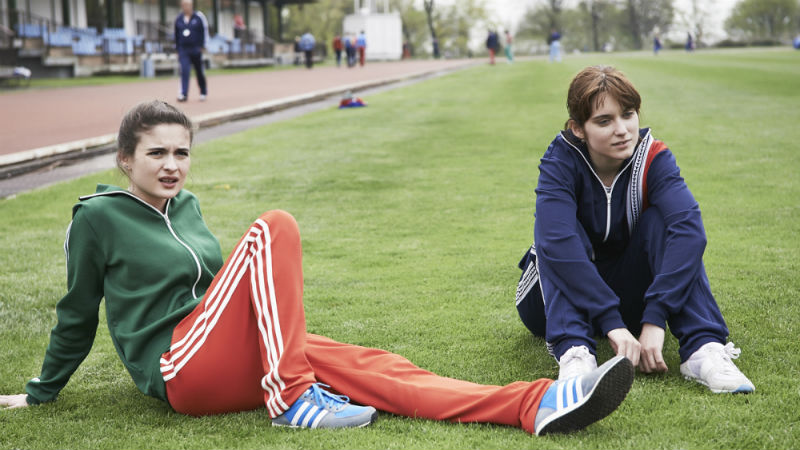 Each of the individual performances is worthy of note, from the main characters to the smallest moments. The cinematography draws us in, Anna’s small frame perched on a giant statue of Lenin is a wonderful image of the individual being dwarfed by the enormity of the state. We care about these people and ache as they pick their way through each situation life throws at them.

Unfairness runs throughout Irene and Anna’s journey like a stick of rock. Ultimately they are united in choosing principle over personal gain, a decision that is vindicated in a final illustration of Soviet grandstanding where the government is more concerned with how they appear to the world rather than being tested in fair competition. Nothing is ‘Fair’ in this system and ‘Fair Play’ remains an important film, a very human depiction of life under an inhumane regime.

Fair Play is available for viewing at home right here and right now:

Be careful not to sink! Coming-of-age tale set in rural Latvia tackles the issues of economic emigration, the ruthlessness of free market, abandonment and emergent sexuality - streaming now with DMovies [Read More...]