When discussing his latest feature, writer-director Gareth Evans has expressed his desire to “make something that fits within [the] British folk horror tradition”. With Apostle, a grisly story of an opiate-addicted former missionary sent to a secluded Welsh island to rescue his sister from the fanatical inhabitants who have kidnapped her, Evans’s desire has been thoroughly realised.

The premise brings Robin Hardy’s The Wicker Man to mind, though if you thought Hardy’s film was shocking, wait until you’ve seen Evans’s. Gone are the bizarre folk music interludes of the 1973 classic, in their place extended scenes of blood-letting and skull-boring. In some ways, Apostle is more akin to the Hostel series than the comparatively quaint world of British folk horror, but what it does retain of its The Wicker Man-influence is a sense of mystery, human sacrifice for the Earth and creepy masks! 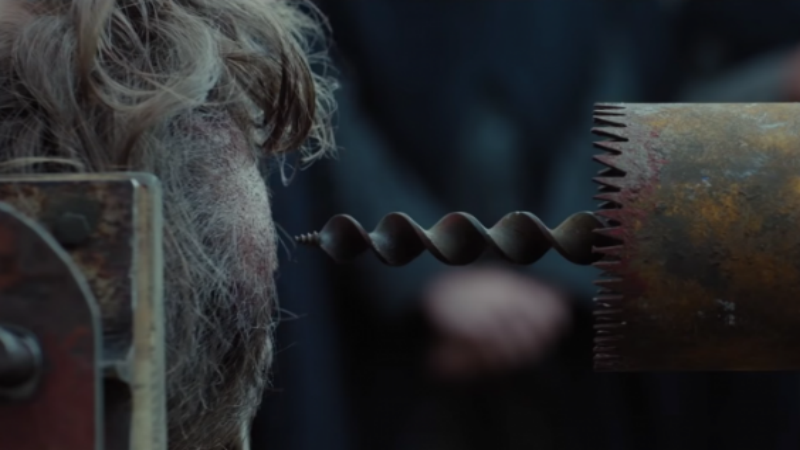 Even before he arrives on Erisden, Thomas Richardson (Dan Stevens) is forced to decipher clues as to how to survive and navigate the island. His mission, as a drugged-up, faithless Neil Howie, continues in this vein for at least half the film’s runtime before turning more to the supernatural and the savage.

In this way, Apostle also recalls Ben Wheatley’s Kill List (2011), beginning as one beast before morphing into another bloody and brutal creature entirely. Michael Reeves’s Witchfinder General (1968) and Ken Russell’s The Devils (1971) round out Evans’s confirmed influences, though the barn-like dwelling of Her (Sharon Morgan) evokes the thorny labyrinthine maze of Carcosa from True Detective season one.

To Evans’s credit, the mythology of Her, a perverse personification of Mother Nature, is never over-explained, though what is revealed bears similarities to the abduction of Persephone, the daughter of Zeus and Demeter, by Hades: infatuated with his niece, Hades abducted Persephone (with the despicable Zeus’s aid, it must be noted) before tricking her into returning to the underworld each year by feeding her blood-red pomegranate seeds. Whilst Persephone was gone, Demeter neglected the Earth to search for her daughter, causing Greece’s crops to perish and leaving its people on the brink of starvation. 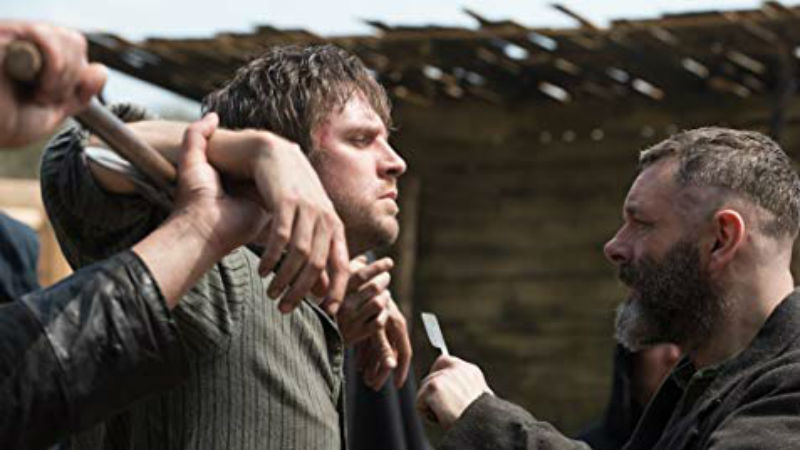 Like Hades, Prophet Malcolm and his right-hand man Quinn (Michael Sheen and Mark Lewis Jones, respectively) abduct Her after discovering her on the Utopian Erisden. They imprison her and force her to consume the blood of animals (and later humans), which they figure begets the island’s vegetation to grow. When this fails, leaving Erisden’s inhabitants hungry and broken, Quinn ousts Prophet Malcolm as the leader of the commune, his plan to keep Her sustained involving not pomegranate seeds but seed of another very different kind.

Evans and long-time collaborator Matt Flannery capture some majestic imagery amongst the broken bones and bloodshed, and in wholly inventive ways. During a flashback to Thomas’s missionary work in Peking, Flannery’s camera begins upside down, inverting a burning cross as Thomas’s world is flipped on its head and his faith in God is shattered. One point-of-view shot, as a man’s skull cracks in a vice and semi-transparent crimson blotches the screen, is nauseating and horrific in equal measure.

Bill Milner and Kristine Froseth’s performances aren’t quite up to the same standard as those given by Dan Stevens, Michael Sheen, and Mark Lewis Jones, but Sebastian McCheyne as The Grinder is Apostle’s standout star. A beehive-like mask covering his entire head and face, McCheyne hobbles around his house of horrors like a murderous Quasimodo or deranged ape. He’s perhaps not an instant horror icon, but is possibly Apostle’s most memorable aspect, alongside its sheer amount of violence and gore. Likewise, Apostle isn’t an instant horror classic, but will probably go down as an underrated and underseen gem.

Apostle is available to view exclusively on Netflix from Friday, October 12th.

My obsession with film started when I was quite young. The first film I ever saw was Wal...