"Dirty gem"
Jeremy Clarke unearths the dirt in Disney's latest addition to the lucrative Stars Wars trilogy, and hazards a guess that the saga will continue for a very long time - in cinemas from Thursday, May 24th

Disney has hit the mother lode with the Star Wars franchise and is wasting no opportunity to deliver to its huge, hungry fan market further films to fill in between the ‘official’ trilogy episodes eight and nine. This one takes the character of Han Solo, owner and pilot of legendary spaceship The Millennium Falcon and goes back to maybe 10 years before the events of the very first Star Wars film (aka Episode IV: A New Hope, George Lucas, 1977). The script is by veteran Lawrence Kasdan (most notably co-screenwriter on The Empire Strikes Back, Irvin Kershner, 1980) and one of his sons Jonathan; on the evidence of Solo: A Star Wars Story they appear two very safe pairs of hands.

I always had the feeling that George Lucas had lucked out casting the then largely unknown Harrison Ford as Han Solo in the first film. Perhaps Star Wars would still have been the monster hit it was with another actor in the part, but in his first major role Ford lit up the screen every time he came on. Much the same thing happened when Disney bought him back into the series for fan favourite Star Wars: The Force Awakens (J.J.Abrams, 2015). So the challenge for Solo is to find an actor who can bring to the teenage Han Solo something on a par with what Ford brought to the adult version of the character. Imitating Ford would probably be a mistake. Alden Ehrenreich turns out to be a good choice. His performance effortlessly includes mannerisms which are pure Harrison Ford so you can believe the one onscreen actor will grow into the other later on. Yet Ehrenreich is smoother and less wisecrack-ey. But, the important thing is, it works.

Speaking of imitation, something I personally hate is when a Star Wars film slavishly copies parts of earlier Star Wars films (or even one of the films more or less in its entirety). This really isn’t a charge that for the most part can be levelled at Solo which plays out as a series of unique set pieces: an urban speeder chase, an attempted escape from a planet which is a prison in all but name, an Imperial training base where Solo meets the wookie Chewbacca (Joonas Suotamo, here playing a younger version of the character he played in Star Wars: The Last Jedi, Rian Johnson, 2017), a raid on a (sort of) monorail train winding its way through mountains along snowy ridges, the gambling den of Lando Calrissian (Donald Glover aka Childish Gambino) where The Millennium Falcon changes hands in a card game, a daring sortie to Kessel to plunder an unstable, explosive substance and a race against time to get that substance to a processing plant before it blows up and takes the Falcon with it. 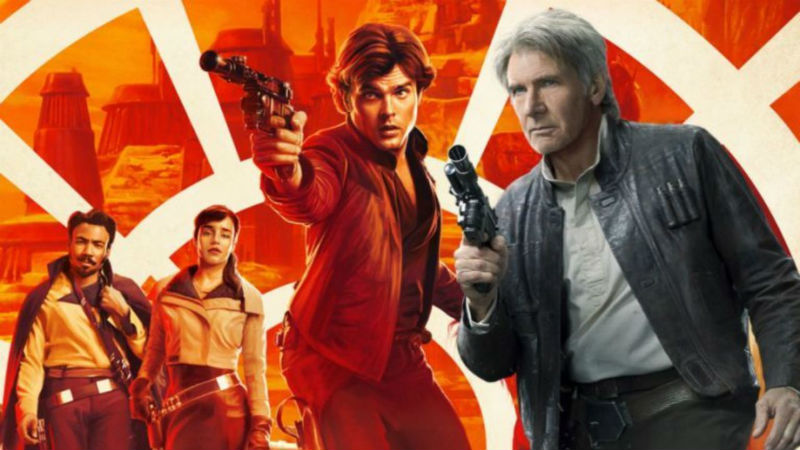 In between all that comes cross and double cross involving Qi’ra (Emilia Clarke), the girl Solo left behind when he escaped the initial planet who in the interim has done “things you couldn’t possibly understand”, intergalactic criminal player Tobias Beckett (Woody Harrelson) and crime lord mastermind Dryden Vos (Paul Bettany). There are muddy rumours about a mysterious organisation known as the Crimson Dawn and – in a calculated imitation of Disney’s equally lucrative, rival Avengers franchise – talk of a gangster on the planet Tatooine putting together a crew to do a job both of which will presumably furnish material for the inevitable second and third Solo films. The Crimson Dawn trilogy, perhaps?

The gambling den scenes involve a degree of cheating on the part of Calrissian and in a later confrontation a clever countermove against his underhand methods by Solo. But as with whatever went on with Qi’ra which we never saw, there’s a feeling that what’s actually made it onto the screen isn’t that dirty. Enjoyable and entertaining? Yes. Dirty? Not particularly.

Two other characters fare rather better in terms of whether or not the film is a genuinely dirty vision.

Beckett’s sidekick Val is played with great presence and energy by a terrific Thandie Newton, continuing the franchise’s push for ethnic diversity within its cast. As with John Boyega in Disney’s first Star Wars film The Force Awakens (2015), it’s good to see a black actor take centre stage in a Star Wars outing and the fact that it’s a woman is a definite dirty plus. Newton plays the character as a no nonsense, hardbitten type as effective as Beckett. 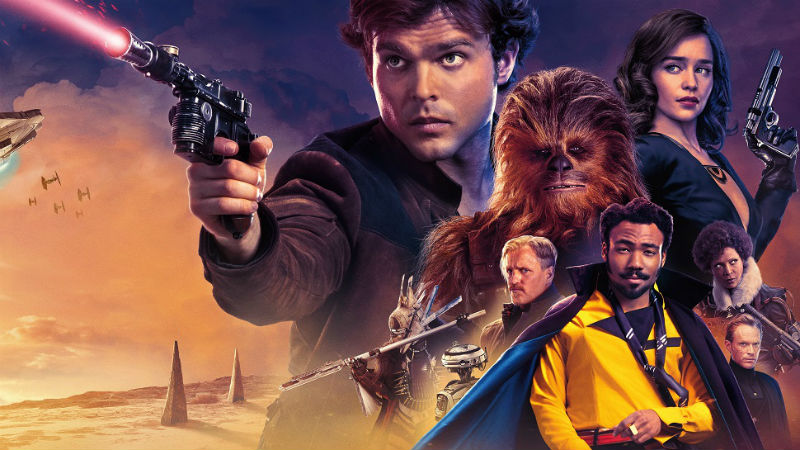 Equally if not more worthy of special mention is Phoebe Waller-Bridge for mocapping and voicing Calrissian’s co-pilot and droid with attitude L3-37. She’s far, far removed from the cuddly R2-D2 and subservient English butler-type C-3PO droid and robot of Episode IV, constantly arguing with Calrissian and poking her nose in where it isn’t wanted to speak up about Droid Rights. It’s as if C-3PO changed sex and became a rampant feminist. L3-37’s not perfect either – occasionally someone has to give had a bang on the head to get her circuits to function correctly, but she always comes through in a crisis. The character, and Waller-Bridge’s visually arresting physicality of movement and vocal argumentativeness, is arguably the dirtiest thing in the film and surely destined to become a major element in Millennium Falcon mythology.

The proceedings overall start at breakneck pace and never really let up, with the screen constantly full of amazing visuals and astonishing characters. Perhaps the biggest surprise of all is that the director holding it all together (after the original directors were fired) and doing a fabulous job is Hollywood veteran Ron Howard who prior to this surprised us all with compelling motor racing biopic Rush (2013) and memorable documentary The Beatles: Eight Days A Week – The Touring Years (2017). If he seems less interested in dirt and subversiveness than in delivering the package Disney and the audience want, to his credit a few dirty elements still sneak into the movie. Meanwhile, Disney currently seem to have the magic touch with the Star Wars movies and their serious presence in the blockbuster stakes looks set to continue for quite a while, dirty or not…

Solo: A Star Wars Story is out in the UK on Thursday, May 24th. Watch the film trailer below: