"Filthy genius movie"
“Dave, do you mind if I ask you a personal question?” The sci-fi movie considered by many the greatest ever made returns to UK cinemas in 70mm 50 years after its original release - exclusively at London's PictureHouse Central for two weeks from Friday May 18th

Kubrick’s 2001: A Space Odyssey is back in a brand new 70mm print struck from new printing elements made from the original camera negative. Like known champion of physical celluloid over digital print Christopher Nolan who was involved in the process, I saw the film in a cinema as a boy with my father, although in my case I saw one of its many reruns in the seventies. Nevertheless, I relish the chance to go back and see this brand new ‘unrestored’ 70mm print because it recreates what audiences saw on release, no remastering, re-edits or redone effects.

The film absolutely holds up against present day efforts (one of the few remotely like it is Nolan’s Interstellar/2014). In its day, 2001’s visual effects were far superior to anything previously seen in science fiction and although cinema effects technology has moved on considerably, this aspect of the film remains convincing.

However, the visual effects are far from being the strongest aspect of the film which was conceived by director Kubrick with SF author Arthur C.Clarke. The plot is deceptively simple. (Skip the rest of this paragraph to avoid spoilers if you’ve never seen the film.) A monolith (sides ratio: 1:4:9) appears on Earth and inspires primitive apes to make weapons, it reappears thousands of years later in the Tycho crater on the Moon and after being excavated unexpectedly sends a one-off transmission to Jupiter. So mankind sends a space mission to Jupiter, but the ship’s on board computer malfunctions and attempts to kill the crew. The one surviving astronaut undergoes a journey which culminates in his going through the door of the monolith and emerging as a gigantic star child. 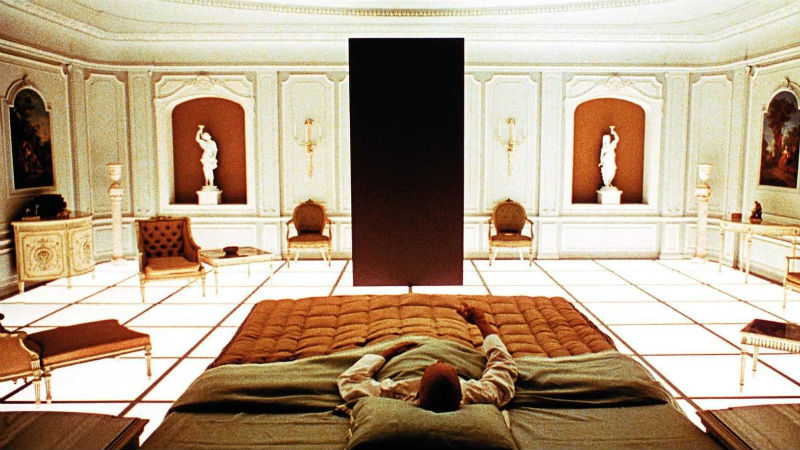 Considering the magnitude of the themes involved here, it’s surprising how dull or banal much of the movie is. If this sounds like negative criticism, I don’t mean it in that sense. The film’s execution is never dull or banal, rather much of its subject matter is dullness or banality. Hitchcock once described drama as “life with the dull bits cut out”; Kubrick’s genius in 2001 is that he forces us to watch these dull bits. And they make for compelling viewing.

Thus there are scenes of apes gathering at a watering hole or huddling underneath rock ledges at night against the cold. There are scenes of a flight to the moon via an intermediary space station when a jump cut could have taken us straight there in terms of plot. There’s a briefing in a conference room at Tycho where Dr Haywood Floyd (William Sylvester) addresses fellow scientists about cover stories and the need for secrecy from which the film cuts away just before telling us (a scene we never see) what he knows about the object excavated in the crater. There are hours of the two man crew Dave Bowman (Keir Dullea) and Frank Poole (Gary Lockwood) – there are actually five crew, but three are in hibernation – and the HAL 9000 computer (voice: Douglas Rain) going about their daily routines aboard the Discovery One spaceship to Jupiter. There is the weird interstellar journey which plays out like an incomprehensible drug trip and, finally, the surviving astronaut’s emergence into a world of rooms in which eighteenth century furniture sits upon a grid of white squares lit up from below. It’s hard to find anything like any of this elsewhere in cinema, science fiction or otherwise.

Set against these scenes are moments of great import: an ape trying out as a club a bone found on the ground, a group of spacesuited astronauts on the moon overcome by sudden, unbearable noise from the monolith, a spacewalking Jupiter Mission astronaut struggling frantically after his breathing line has been cut and the heartbreaking disconnection of HAL one memory terminal at a time. 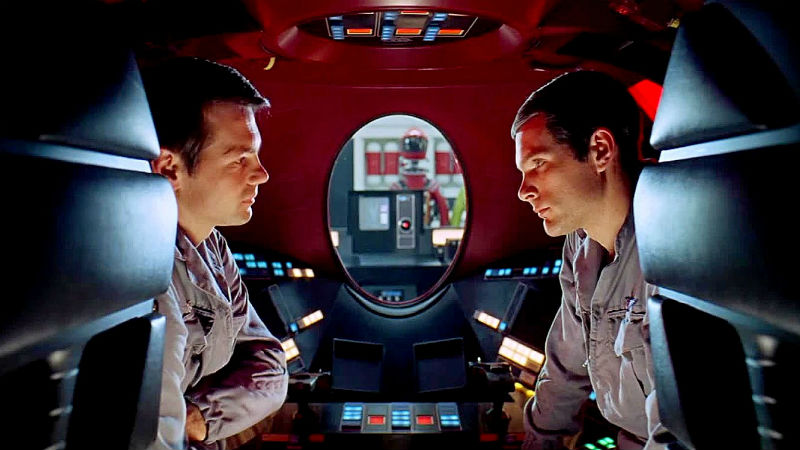 The wider panorama here contains unforgettable moments predicting the minutiae of space travel which may not have come true in the year 2001 but still feel like they could be just around the corner in 2018, the date of the film’s title notwithstanding. Take the celebrated sequence travelling to the space station. A sleeping Pan Am passenger’s pen floats in zero gravity, an air-hostess (or space-hostess) enters shot right way up and walks in a circle until her feet are above and her head below to walk out of shot upside-down, a rotating space ship slowly docks with a space station with which its rotation is in sync – all to the strains of Strauss’ Blue Danube waltz. And as testament to the incredible detail in the notoriously obsessive Kubrick’s intensive research, widescreen TVs on the backs of the seats inside the passenger cabin. Unremarkable today, but possibly little more than an idea on a drawing board somewhere in the TV manufacturing industry when the director built them into his film as something of a major coup.

If 2001 remains unchallenged as the greatest SF film of all time, there is however one aspect in which it has aged badly overall. Aside from the group of four Russian scientists with whom Dr. Floyd has a conversation, three of whom are women, it’s notable that women aren’t given any real position of prominence in 2001 – hostesses and receptionists plus a handful of minor/secondary scientists characters – and that’s it. If Kubrick and Clarke were alive and writing the film today, I’d like to think that’s something they might change. Otherwise, though, 2001 could have been made yesterday and seeing it in this brand new 70mm print is a real treat.