"Filthy genius movie"
Get your game on. Spielberg heads back to the future using Tye Sheridan as his avatar inside a visually lavish virtual world stuffed with 80s pop culture references and dirtylicious resonances – now also available on Netflix

Spielberg has long been happy to move between big-budget spectaculars like Jurassic Park (1993) which push the boundaries of what’s possible in film and culturally significant stories like Schindler’s List (1993) which rely less on special effects or reshaping the blockbuster medium. Following Bridge Of Spies (2015) and The Post (2017), Spielberg now brings audiences Ready Player One which represents something he’s been trying to make for years – a movie which gets into the heads of gamers.

Among his earlier forays, The Lost World: Jurassic Park (1997) felt like a funny mixture of a sequel and an attempt at realising the gamer world (think: racing through fields in vehicles surrounded by numerous running dinosaurs). Subsequent films A.I. (2001) and Minority Report (2002) both boast futuristic environments that might not look out of place in a state of the art video game. Further, the experience of watching The Adventures Of Tintin (2011) recalls the process of actually playing a computer game. Ready Player One is, however, Spielberg’s first film to use gaming and Virtual Reality as its primary subject matter. Here, he finally puts his long-gestating gamer flirtation onto the big screen in all its virtual glory. 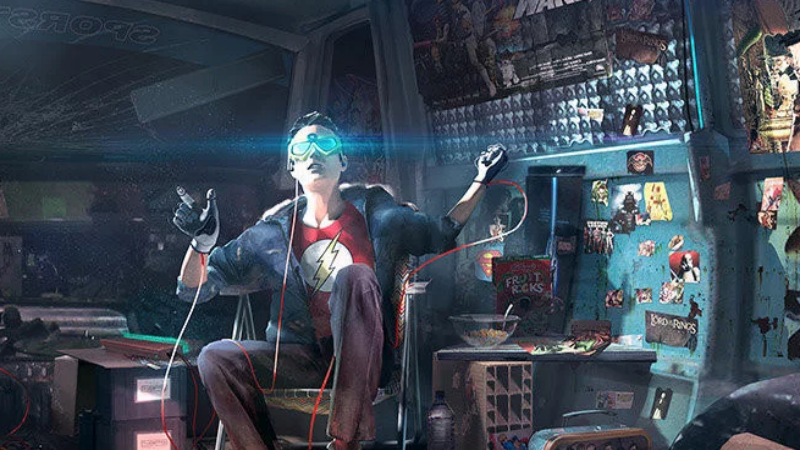 Ready Player One opens in 2045 in the futuristic environment of the rapidly developing and overcrowded Columbus, Ohio where trailer park meets high-rise architecture. These strange structures literally stack caravans on top of one another recalling Brazilian favelas. Inside the caravans, people eke out their days playing in a virtual world on headsets to escape the horrors of the real world. What people do inside the virtual world known as The OASIS determines their wealth in coin; a bad move can cost them everything they’ve worked for up ‘til then.

The OASIS’ late designer Halliday (Mark Rylance) decides prior to his death to issue a challenge to his gamers, hiding an Easter egg inside his creation. The finder of the egg will inherit The OASIS to do with as he or she chooses. Ordinary teenager Wade Watts (Tye Sheridan from Detour, effectively Spielberg’s avatar here) is determined to win this contest to escape the oppression of his life. His own avatar Parzival who drives the Delorean from Back To The Future (Robert Zemeckis, 1985) faces friendly competition from the beautiful Art3mis (Olivia Cooke) who rides the bike from Akira (Katsuhiro Otomo, 1988). More perilously perhaps, ruthless antagonist Nolan Sorrento (Ben Mendelsohn) runs the Innovative Online Industries (IOI) corporation which will stop at nothing to beat all other players and win control of The OASIS. Their evil plan involves monetizing and privatizing the system for political gain.

Borrowing the iconography of the blue creatures from Avatar (James Cameron, 2009), Spielberg introduces Wade firstly as a real-world person, then as an avatar. Wade/Parzival’s friends are, however, introduced primarily as avatars so that you don’t know who they are in the real world – their avatar could be concealing an entirely different age or gender in real life. Some characters do indeed turn out to be very different from their online profiles.

There are some dirty settings in the real world too. Aside from Columbus’ seeming attempt to cram as many people as possible into small living spaces, IOI offers a corporate headquarters populated with helmeted minion employees known as Sixers – denoted by six-digit numbers and not names – where gamers work not for their own enjoyment but to increase the company’s profits. IOI’s Loyalty Centre provides the equivalent of a debtor’s prison wherein individuals are incarcerated and shackled. Locked into parts of The OASIS where they must work off their debt, being charged for the privilege of being housed there so that they can never break the cycle. 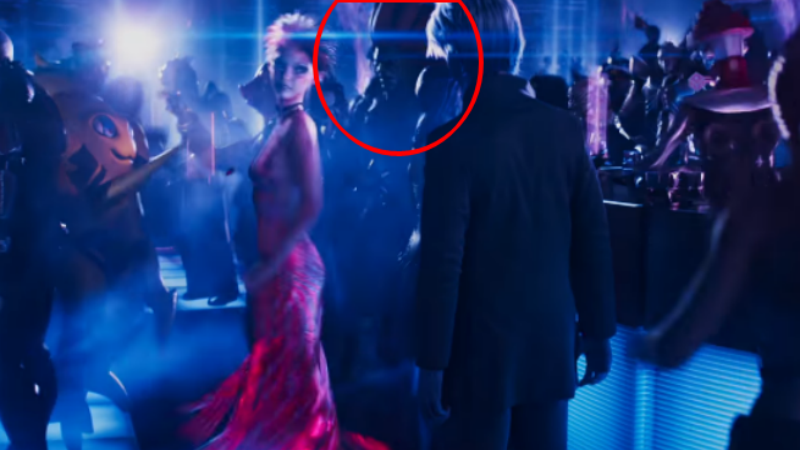 Captured and held in the Loyalty Centre, Art3mis finds herself forced together with other unfortunates to plant explosives at regular intervals within a section of The OASIS. People are expendable in IOI’s plan: witness the queue in a frozen wasteland of hopefuls required one by one to play an Atari game on an old-fashioned TV only to descend through breaking ice into the freezing depths below when they lose (as they invariably do).

The majority of the action takes place inside The OASIS where Spielberg stuffs his film full of multiple, largely 80s cultural references from King Kong and, yes, Jurassic Park’s T.Rex to The Iron Giant, MechaGodzilla and Mobile Suit Gundam. Many of these characters live and breath on the screen as impressively as elsewhere in pop culture or moviedom, if not more so. One sequence even enters the world of The Shining (Stanley Kubrick, 1980), which one of Wade’s friends has never seen and thus falls prey to both the flooding blood outside of the lifts and the woman in Room 237. On one level all this is very playful, yet the whole has a deep mythological underpinning as the tale’s lone everyman, helped by an underground resistance movement of like-minded individuals, takes on a vast, profit-oriented organisation.

While it’s hard to believe 2045 will actually look and feel like this, Ready Player One is undeniably timely with the world of Virtual Reality just around the technological corner. It’s a film to see on as big a screen as you possibly can with as much digital detail as that screen will allow thanks to breathtaking, rapid-fire visuals. It’s loud, flashy and moves along at an incredible pace. Still, while that could simply denote the latest vacuous Hollywood blockbuster, there is a lot more going on here beneath the slick and frenetic surface. Moreover, once the narrative leaves the impressive enough futuristic real world for the virtual gaming environment, Spielberg finally pulls off that movie which he has been trying to make for years. Welcome to The OASIS, truly.

Ready Player One is out in the UK on Thursday, March 29th. It’s available on digital streaming on Monday, August 6th. On Netflix in October (2020).

Should I stay or should I go? Smart thriller wherein a man’s life is literally split in two as he chooses between an ill-advised road trip to Vegas or staying at home with his hated stepfather - now on DVD and VoD [Read More...]

As people flock to cinemas across the world in order to watch Andy Muschietti's 21st century take on It, we look back at five dirty gems of the cinema world also based on books by the King of horror and supernatural fiction [Read More...]

One thought on “Ready Player One”