The first five minutes of this film are so frenetic and electrifying that I could swear it was going to win the Palme d’Or. Syrian refugees are trying to cross from Serbia into Hungary at night on a makeshift boat controlled by greedy smugglers, where they are met with bullets. Their precarious craft capsizes, many are killed and others run into the dense Puszta forest. This is where Aryaan (Zsombor Jéger) is met by a police cop, who shoots him three times. Unexplainably, the bullets fail to kill him. But that’s not the only miracle: the young Syrian suddenly learns that he can fly.

This a premise for a very promising movie, lyrically translating the political connotations of the refugee crisis into supernatural powers. Plus, the film is a metaphor of Europe: it opens up with titles explaining that there is a sea of salt water on one of Jupiter’s moons that could harbour life, and this sea is aptly named “Europa”. Sadly these promises do not materialise. The film slowly morphs into a action thriller dotted with a few poetical devices. By the time we reach the end, the pan-European political message is hardly recognisable, diluted instead in the beautiful cinematography and a fast-paced script.

A greedy doctor called Stern (Merad Ninidze) takes the “angel” Aryaan (maybe it’s no coincidence that his name sounds a lot like “Ariel”) to the Hungarian capital in order to monetise his superpowers. Until the police realise what’s happening and begin to pursue both men, who predictably begin to develop a bond. The bad guy Stern ultimately finds redemption in his life, and tries to make amends with those whom he wronged in the past. He was touched by an angel, it soon becomes clear. 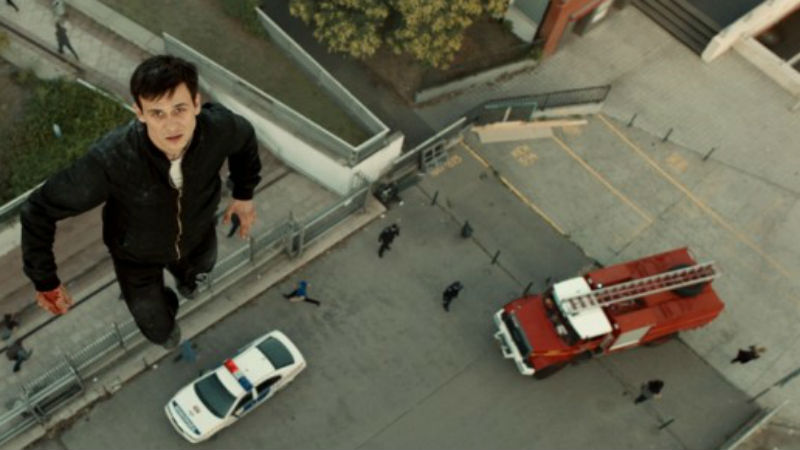 This is not a bad movie per se. The camerawork is indeed impressive, with the image rotating and swiveling across the skies of Budapest. Aryaan also has telekinetic powers. There’s a sequence in the middle of the movie where he makes all the furniture inside a room rotate, thereby taking revenge on a minor antagonist. It looks like some sort of Carrie (Brian de Palma, 1976) meets Mirror (Tarkovsky, 1975), which plenty of reflections, shadows, dirty windows and water dripping from the ceiling. It’s worth watching Jupiter’s Moon even for this sequence alone.

The problem is that the film is a bit to long at 120 minutes, and the special effects become repetitive after a while. After 60 minutes or so, the dizzying heights and ingenious camerawork will no longer make your head spin. Plus it plods too heavily towards some sort of grand finale. You will often get the impression the director is working very hard towards some sort of magnificent ET or King Kong-like ending. Yet there’s nothing novel, surprising and audacious about the closing of the movie.

Jupiter’s Moon showed as part of the official competition of the 70th Cannes Film Festival, when this piece was originally written. Overall, the film did not pleased critics, no miracle happened and so the film did not take the Palme d’Or. It is out in UK cinemas on Friday, January 5th (2018). On Mubi on Tuesday, May 24th (2022). Also available on Amazon Prime.

Why are we failing so many fellow human beings? Chinese artists's eagerly awaited doc takes looks at the shocking plight of refugees in various corners of the planet, in a heartbreaking 140-minute journey - now on all major VoD platforms [Read More...]