"Greasy movie"
Why are we failing so many fellow human beings? Chinese artists's eagerly awaited doc takes looks at the shocking plight of refugees in various corners of the planet, in a heartbreaking 140-minute journey - now on all major VoD platforms

Sixty-five million people have been displaced around the world, more than any time since WW2. And, on average, refugees stay away from their home for 26 years. Ai Weiwei’s Human Flow is constructed upon these and many more figures, providing a detailed pictured of the life of refugees in various parts of the planet. The Chinese artist-turned director visited 40 refugee camps in various continents in order to come up with this jarring and emotional picture.

He emphasises the magnitude of the phenomenon and subsequent humanitarian crisis with his photography. A number of drones is used, making camps look like a dioramas and people look like ants. The insect comparison rings particularly true in the burning sands of the Syrian-Jordanian border. This is of not intended in a pejorative and demeaning way. Ants are social animals that live in large colonies and can not thrive on their own. Similarly, Weiwei wants to highlight our collective nature and the importance of solidarity. Just like the ants, we must help each other. 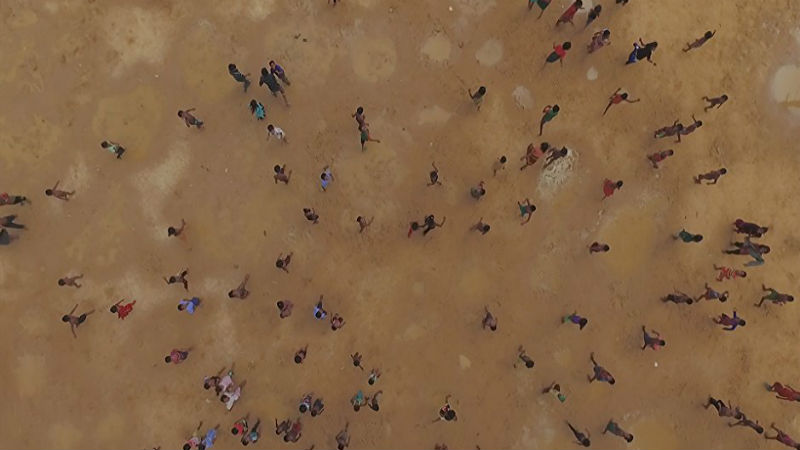 This is also a very political film. Weiwei does mince his words when making a statement: he calls the Iraq War “a US led-invasion”, and he describes the entire population of Palestine (at 4.2 million) as refugees, clearly suggesting that Israelis are occupiers. He also investigates the EU’s failure at welcoming refugees: for example, he goes to the Hungarian-Serbian border, where a fence has been erected, leaving refugees confused and despondent. He also takes a look at the Mediterranean, where thousands are drowning every year.

Interestingly, almost the entire film takes place in the Middle East and North Africa, bar a small segment in Afghanistan, Myanmar and the American-Mexican border. The doc Europe at Sea (Annalisa Piras), which came out just last Friday, described Europe as being surrounded by a “ring of fire”, referring to the displacement crisis. Weiwei’s seems to confirm the statement made almost simultaneously by the Italian filmmaker.

Human Flow feels like a punch in the stomach, a painful reminder of our failure to be solidary with our fellow human beings. A Mexican interviewee makes a powerful, succinct and very controversial statement: “immigration is a human right”. Ai Weiwei – a refugee himself in his earlier years and now an immigrant in Germany – seems to agree. As do we at DMovies.

Technically, this is a superb film. The drone images are breathtaking and there are also a couple of sequences from what looks like a falling parachute, which allows viewers to “deep dive” into this collective universe of refugees. The photography of chaos is fascinating in many ways. I wouldn’t call this poverty porn, but there’s definitely something riveting and even attractive in some of the images. Despite the abject poverty, lack of food, basic sanitation and healthcare in most of these refugee camps. Viewers sometimes might be left in the awkward position: am I intended to contemplate and to find this beautiful? 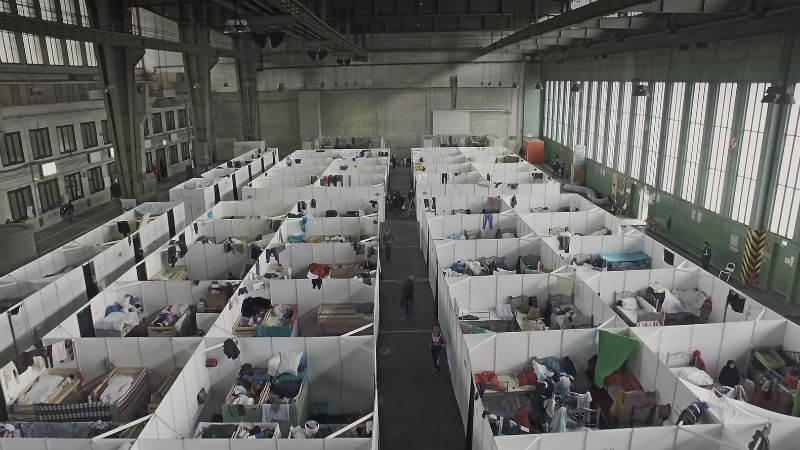 On the other hand, the film feels a little distant, almost like an art piece instead of a movie. This is because the director made the artistic choice to focus on the collective and he never delves into individual predicaments in too much detail. After all, ants move fast and don’t talk. There are a few interviews, but they are all very short and discontinued.

But there is a much bigger problem with the film: it lacks sources. I have no idea where the 65 million people and 26 years figures came from, and what calculations were used in order to achieve these numbers. Ai Weiwei states that 5,000 refugees drowned in the Mediterranean in 2016, while Europe at Sea (which quotes its source) puts this figure at more than 17,000 just in the first eight months of the same year. In the age of post-truth and Donald Trump I cringe every time I see figures without sources, particularly when you are trying to make such a vital statement. I know Weiwei had his heart at the right place, but this doesn’t prevent him from sharing with us where his crucial data came from.

Human Flow was out in cinemas across the UK on Friday, December 8th, when this piece was originally written. This is not cheerful Christmas fun, but it will nurture you in many other ways. This is not your usual cold turkey. This is powerful food for thought. It’s out on all major VoD platforms on April 16th.

Film as a transformational weapon against war

Filmmakers equip children and adolescents in Iraq with cameras instead of guns, enabling them to shoot from a very different perspective, in a likely unprecedented initiative. Now it’s your turn to do your part [Read More...]