Scandinavian humour is dark, harsh and droll, and you’d be forgiven for thinking that it would be entirely inappropriate to use such a cold and bleak device in order to criticise Europe’s failures at implementing multiculturalism and embracing refugees. But you are wrong. Finnish screenwriter and filmmaker does just that to very convincing results in one of the most eccentric comedies you will ever come across in your life.

Khaled (Sherwan Haji) is a Syrian refugee who arrives in Finland on a coal freighter. He is literally covered in black as the film begins. He applies for asylum despite knowing that his chances of succeeding are very small. His application is promptly turned down and so he does a runner. He eventually finds a job in a local restaurant owned by Wikström (Sakari Kuosmanen), a former shirt salesman who hit tha jackpot during a poker game. The arrangement turns out to be extremely convenient for both sides. Khaled then acquires a fake ID and begins to live the relatively primitive yet stable life of an illegal alien.

The camera in The Other Side of Hope barely budges, and all the characters seem to be intoxicated with an overwhelming feeling of stoicism or lethargy. Their gestures are scant, their facial expressions scarce and the tears entirely absent. The movie is a very strange hybrid: it’s almost as if the characters were deadpan comedians delivering a sketch of the Theatre of the Oppressed. In other words, their predicament is very serious, yet their reactions are very calm and self-contained. 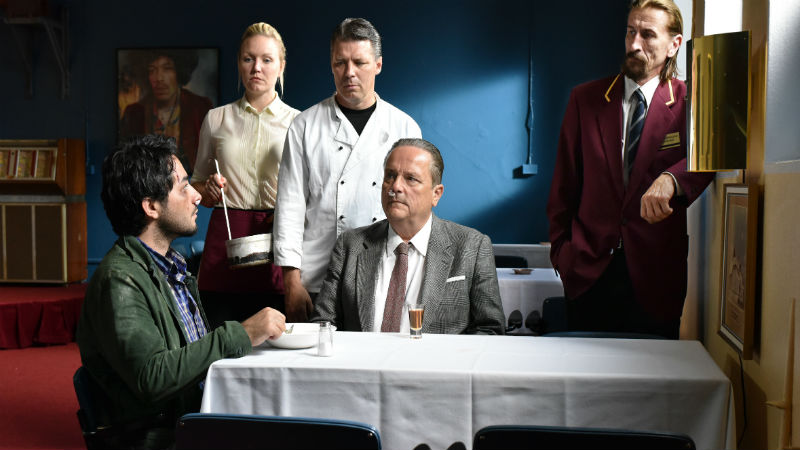 Aki Kaurismäki holds up a mirror to Europe and its consistent failures at multiculturalism, integration and supporting the refugee cause. Finland likes to be perceived as a free and welcoming country: prime minister Juha Sipila committed to opening the doors of his very own house to Syrian refugees in 2015. But the reality is a tad little different. Khaled was refused asylum despite the extremely dangerous and the almost certain prospect of death in Aleppo. And the prime-minister dropped his promise not long after.

The failure to implement multiculturalism is also a central theme. Wikström changes his restaurant menu from local to Japanese and then to Indian in no time, and the staff have to adapt to the changes. Meanwhile, right-wing extremists target Khaled and for a very unusual reason, revealed only at the end of the movie. Europe still has a long way to go befofre it can embrace change and diversity wholeheartedly, it seems.

Ultimately, The Other Side of Hope is a parody of the old continent. The developed and free society into which Khaled wants to fit is in reality a cold, bleak and anhedonic place. The sites are ugly and soulless. One can’t help but to ask: if this side of hope is so humdrum and tiresome, just imagine what the other side must be like. Most Europeans are either unable or unwilling to fathom life in a warzone, and so they conveniently choose to believe that refugees are envious mendicants. Luckily Kaurismäki begs to differ.

The Other Side of Hope showed the 67th Berlin International Film Festival, when this piece was originally written, and it showed in cinemas in May. It’s showing again on December 2nd as part of the London Migration Film Festival. It’s available on Mubi in October (2020).

A Moment in the Reeds (Tämä Ketki Kaislikossa)

Busting refugee myths: LGBT romance between Finnish man and Syrian immigrant has valuable message to teach, but sadly the film is very poorly executed - out on VoD on Monday, October 15th [Read More...]