Mark Jenkin’s astounding new Cornish film belongs to a breed of cinema that no longer exists. It forms part of a rare catalogue of low-budget, celluloid films that have the distinct feel of being homegrown. Making use of avant-garde techniques such as montage and post sync sound, Enys Men restores folk horror to one of its natural habitats – an isolated island off the coast of Cornwall, where a wildlife volunteer has been sent with the task of meticulously observing the blooming of a particular flower.

Other than the immediate perception that the film simply looks like it came straight out of the ’70s, Enys Men resists easy categorisation. Entirely filmed on 16mm, with its saturated colours and musty sound textures, Jenkin’s new film could easily be mistaken for a lost ‘70s movie that was accidentally found in a Cornish archive. In this sense, Enys Men is an astonishing piece of retro cinema that avoids the tired tropes of pastiche. It is not even a tribute to 70s film – it simply makes use of techniques we associate with that particular era. Enys Men, rather, conjures up an aura of timelessness, of being removed from the passage of time, which is precisely where its sense of isolation and tepid horror stems from.

Jenkin, who shot the film himself, gives it a remarkable visual style, with stunning colour hues, be it the red of the central character’s coat (a probable tribute to Nic Roeg’s Don’t Look Now), or the morose blue of the sea, whether peaceful or menacing as the messenger of a tragic force. The cinematography is immaculate in its textured detail, giving breadth to the inner workings of the soul as it enters into contact with the eery landscape of the island. An audacious film that restores British film with aesthetically-obtuse art cinema, of a kind that the UK has not produced in years, Enys Men is a puzzle served on a kaleidoscopic plate, an elegant enigma meant to bewilder, stir and, at times, shake the viewer on an affective level. The riddle opens up before you, in the form of a blooming corpus of sensorious moments, scenes, strapped together with the deft eye of an artist who captures, crafts and trims his material like a sculptor works on stone or marble.

To attempt to describe the plot is difficult. Through its deliberate pace, Jenkin makes use of repetition to outline the scientist’s everyday routine, as she studies the flourishing flowers. This character, played by Mary Woodvine, strangely reminded me of Susannah York in Robert Altman’s Images (1972) and in Skolimowski’s The Shout (1978), two films which bear similarities with Jenkin’s film. The nameless character in Enys Men has a specific routine: it consists of walking the cliffs, taking temperature readings near the outcrop of flowers, dropping a stone down a mine shaft, walking back home where she switches a generator on whose resounding motor runs the electricity in her house. 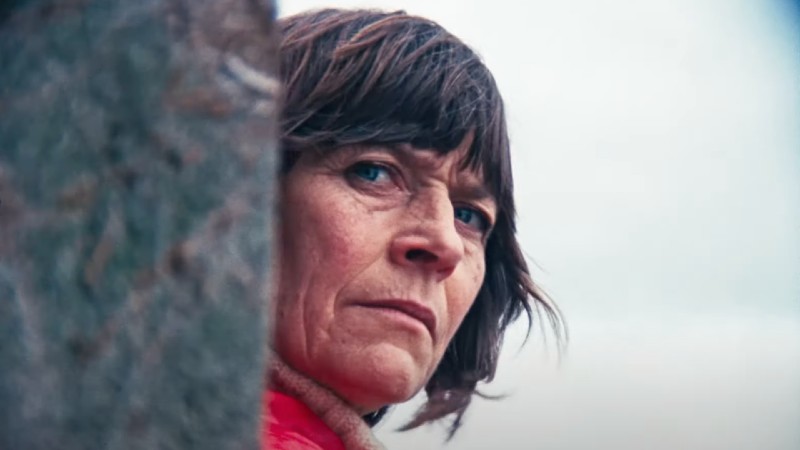 At some point she starts running short on fuel… and tea, and the film is haunted by the gradual sense of her supplies withering away as time flits by. Tension builds up, and secondary characters appear: a daughter whose existence is relegated to a ghostly world ; a lover from the sea, who supplies her with food and fuel for the generator, a man whose intermittent boat trips to the island she owes her life to.

At the BFI Film Festival last year, where I first saw the film, Jenkin joked in his introduction that he had written Enys Men in only a few days. He may have done so, but the attention to detail at later stages of production must have been extraordinary. It is palpable whilst watching certain scenes. The film is spangled with detail: it develops a rich language of symbols that speak to each other, expanding into a vibrantly haunting mythology of images. Jenkin’s formal and symbolic constructions are highly suggestive, they are meant to stimulate analysis but provide no explanations.

Images are constantly visited by a weighty sense of the past. This land bears the marks of its history: a tragic stage which sees humankind relentlessly tormented by sordid loneliness and the confrontation with the elements – the sea, the wind, the cold. The nameless character’s psyche begins to be welded into the history of the land, built on specific industries such as mining. With surrealist scenes depicting bal maidens and Cornish miners, Jenkin blurs her personal experience with the hidden images of history, resurfacing from the earth.

The second half of this 96-minute film is particularly engrossing. Montage effects grow relentlessly, the pace reaches a slow-burning climax and more characters emerge. They speak in ways that are so ethereal it feels they are coming from spiralling memories on the verge of oblivion. My favourite scene sees the entry of an intense draught of wind into the house. It collides with a glass containing a solitary flower. The scene emerges out of the calm with the intensity of a storm, a sudden implosion. Shot-listed to the millimetre, each image is weighed, measured and assembled to the next with utmost care. The result is a staggering scene where different timelines, symbols and characters fold into one another, under the looming sign of future tragedy and death.

What was striking about Jenkin’s previous film, Bait (2019), was the fact that it had been made so humbly, with no real intention to be released on such a monumental scale. The reception was then quite sensational, Jenkin and producer Monk becoming overnight celebrities in the world of art cinema. The unexpected successes of Bait and Enys Men bring hope to the life of, not only local cinema, but also to a resurgence of British art cinema, and to the specific craft of celluloid cinematography. Enys Men’s future is bright.

Enys Men is in cinemas across the nation on Friday, January 13th.

The four short films that preceded BAIT are equally profound, inventive and imbued with Britishness as the dirty classic that astounded critics and audiences alike last year - on VoD no Monday, August 3rd [Read More...]