"Filthy genius movie"
The four short films that preceded BAIT are equally profound, inventive and imbued with Britishness as the dirty classic that astounded critics and audiences alike last year - on VoD no Monday, August 3rd

If there’s one filmmaker that epitomises hope in the British film industry, look no further than Cornwall’s native son, Mark Jenkin. Last year, Jenkin’s theatrical debut, Bait, about the timeless conflict of incomers disrupting the austerity of Cornwall’s local fishing community, was heralded by critics and audiences before being awarded the Bafta for Best British Film. As the first-year anniversary of Bait’s theatrical release is set for August 30th, the BFI is releasing four of Jenkin’s short films on August 3rd on the BFI Player’s subscription service.

Like Bait, these short films were shot on 16mm Bolex clockwork cameras, hand-processed with coffee or Vitamin C extracts, and developed by Jenkin from his home studio. The series of shorts offer viewers a glimpse into the creative energy Jenkin has been churning out long-before being regarded as Britain’s most sought-after filmmaker.

Bronco’s House (2015), the first short in the series, is considered a blueprint for Bait. A succession of surreal images of cattle being born and the crashing of the waves along the rocky terrain off the Cornish coast primes the viewer in intense anticipation for the next 45 minutes. Bronco and his pregnant girlfriend are in search of a house to start their new family, but an emotionally distant landlord is holding Bronco back from starting a new chapter in his life. With a series of steely-eyed close-ups on bar patrons, fishermen, and tight-wadded proprietors, one is given the impression that they are watching a revived western in the same vein as Sergio Leone’s Spaghetti Western trilogy minus the gunfire.

Accentuated by the sounds of music artist Discrete Machines, Bronco’s House is a gripping story that sewed the seed for what Jenkin would accomplish with Bait. The stark and ominous aura of Bronco’s House bleeds into Jenkin’s 2019 s Hand, Cracked the Wind. An aspiring poet (Tamla Kari) stumbles across a writing case with her initials engraved on it only to find a poem written by the case’s previous owner. This 17-minute movie plays out like a modern-day version of Goethe’s Faust as the black and white photography leaves room to question whether ink or blood is being spilled on the page. 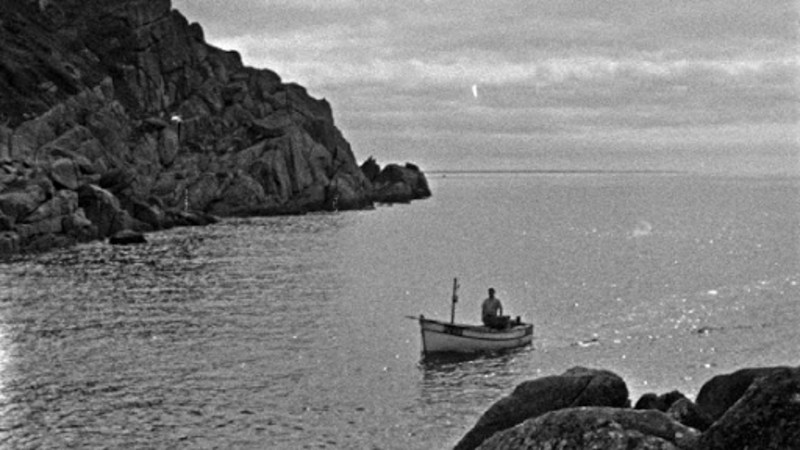 The Gothic horror of Hand, Cracked the Wind (2019) shifts in the short documentary David Bowie is Dead (2018). On January 11th, 2016 – one day after David Bowie’s shocking passing away – Jenkin took his camera around London filming the hustle and bustle of the city as he narrates entries from his diary. The short is a lovely homage to Bowie’s creative spirit. Jenkin’s unobtrusive camera and stream of consciousness narration resembles David Bowie’s character Thin White Duke’s cut-up method. This was inspired by one of his literary heroes, William S. Burroughs, giving the film a literary edge that would make Bowie and the beat writers smile from the great beyond.

Rounding up the series of shorts is Jenkin’s documentary Enough to Fill Up an Egg Cup (2016). When being interviewed by Mark Kermode at the BFI Southbank last year, Jenkin said that “the camera acts as a catalyst for everyone in the community to give their point of view.” Jenkin gives the Cornish fishing community a voice with the shots of seasoned fisherman looking out at the rising sea levels throughout Penberth entwined with sounds of wind rustling through the trees and striking images of the flowing waterways similar to images of Tarkovsky’s Mirror (1975).

With audio excerpts about the dangers of rising sea levels caused by Global Warming, Jenkin’s camera focuses on the expansiveness of the sea and the uncertainty of Cornwall’s future as Britain’s fishing epicentre. The final shot of three fishing boats sailing into unknown waters, coupled with the a capella folk music of a bygone era, is as moving as it is quintessentially British. The series of shorts from Mark Jenkin is proof-positive that his presence in British Cinema, along with his DIY-approach to directing, is as essential as it is inspiring.