While falling decidedly short of the Portrait of a Lady on Fire (Celine Sciamma, 2019) benchmark for French lesbian cinema, still makes for an engaging drama that utilises the combined talents of its two unlikely protagonists, demonstrating them in a series of coquettish, albeit moving, setpieces, establishing the importance of their friendship and love. And much like Portrait, Anaïs could only have been directed by a woman, proving that female led character dramas are better served when they are done entirely by an all female team – Irish indie drama Animals (Sophie Hyde, 2019) also makes a strong case for this approach.

As stories go, it´s certainly original. It centres around coquettish French brunette Anaïs at a time at a strange juncture in her life, abandoning the ruins of a heterosexual relationship to embrace a new friendship with Daniel, where she meets his partner Emilie Ducret, and discovers that the feelings she intended for Daniel are being directed at his partner.

It’s a little too whimsical at times, but Anaïs Demoustier is a striking lead, playing the wilful, doe-eyed character who finds herself falling – quite literally – for the bohemian Emilie Ducret (played with delicious exuberance by Valeria Bruni Tedeschi). What starts off as a discussion between mentor and disciple soon snowballs into something more fervent and freespirited, much to the chagrin of Emilie´s live in lover, Daniel. 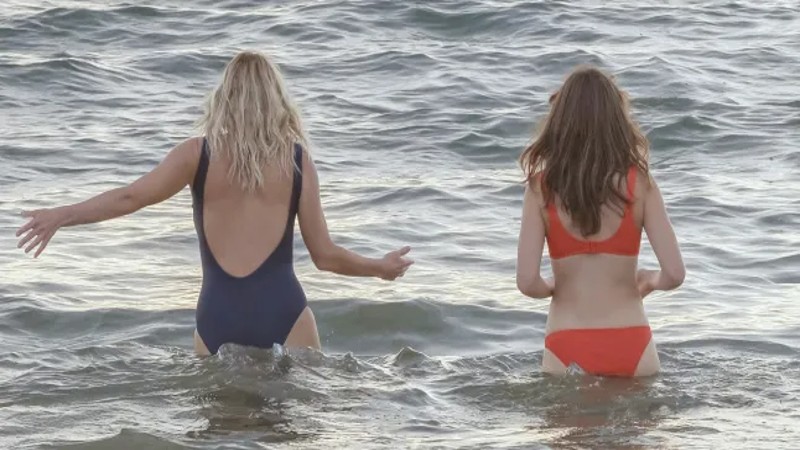 There’s a lot to absorb, although the cinematography certainly papers over some of the plot holes, and the film is so determined to steady its attention on the love story that some of the supporting characters feel infuriatingly undernourished. Bruno Todeschini, for one, never knows what way he’s supposed to turn, it’s a good thing that he’s so magnetic, or he may have been consigned to the cutting room floor. It also feels like it’s been compressed, and at 97 minutes, the film is just too short for one as ambitious as this. You also sense that there was more to Demoustier´s character that was removed from the final cut, because she flits between silent and garrulous with quick abandon.

But there´s no denying the chemistry between Demoustier and Ducret. Yes, there’s an age difference, but the film quickly establishes that this connection is firmly based on an emotional and intellectual interchange between the two mesdames. Again, it´s testament to Charline Bourgeois-Tacquet´s direction that the story unravels with strange pathos, culminating in a piece that’s high on colour and low on urgency. There are no gratuitous silhouettes, but the demonstration of two strikingly beautiful women engaging in the poetry of the moment.

Whether or not this will be remade for English speaking audiences is irrelevant, since the interaction is so organic. But the story is universal enough to translate to London, New York or Ireland. What’s more important is that the director matches the lethargic pace of the French original; preferably directed by a female director too.

Anais in Love is in cinemas on Friday, August 19th. On Amazon Prime and BFI Player in October.

A young woman becomes infatuated with a park ride, in this very strange yet plausible tale of forbidden love - Belgian film is in cinemas on Friday, July 9th [Read More...]