Albert Serra has steadily gained a reputation as a filmmaker to watch. Provocatively, he has mixed the high and the low, no more explicitly as in his Cannes shocker Liberté (2019); and yet there was frequently the suspicion that there was more ambition than effect. Like someone poking you sharply in the ribs to gain your attention only to forget what he had to tell you.

Pacifiction might well be his first out and out masterpiece. Visually stunning via the cinematography of Artur Tort, there is barely a shot or moment in the film that is not worthy of absorbed contemplation. Benoît Magimel plays De Roller, the high commissioner for France of Tahiti in French Polynesia. As he likes to remind people, he is the representative of the State. He shamelessly employs his power to garner his business interests and give himself access to the local nightclubs. In his double-breasted white suit and perpetual sunglasses, he could have slipped from between the mound mottled pages of a Graham Greene novel. He negotiates with the locals, both officially and via the underworld. Various pies have been fingered. A new casino is due to open. The navy admiral (Marc Susini) is orbiting like a little mosquito. A mysterious Portuguese man has lost his passport. The CIA have a presence. And De Roller begins a flirtatious friendship with a transgender hotel worker (Pahoa Mahagafanau).

But the overarching concern is that there are rumors that France is too resume nuclear testing. De Roller’s attitude is slippery, at one point pointing out that nuclear testing caused cancer, but then implying that somehow it also created the possibility of treating that cancer. It is a charmingly obtuse rationalization which demonstrates the man’s demonic talent for remaining aloof of human empathy while appearing to be intellectually engaged in the world he floats through. 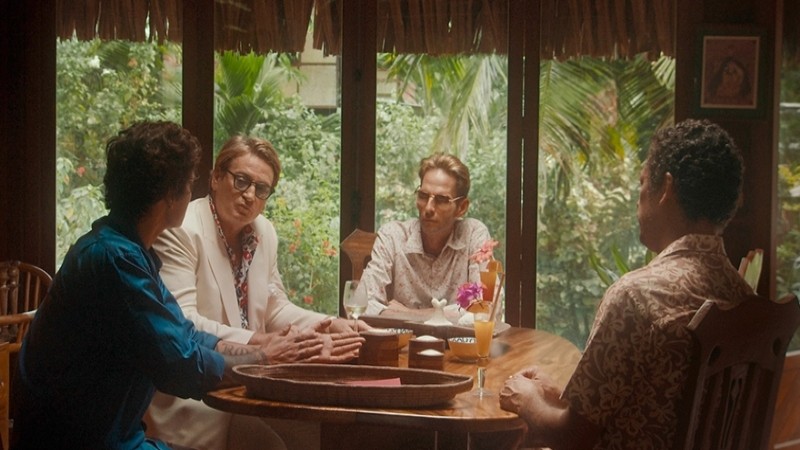 Despite all the plotting, the actual plot is scant and the audience are kept at a distance. De Roller is as enigmatic and slippery for us as he is for the islanders: Magimel imbues him with a wonderful charm. He rarely has a bad word for anyone: engaging in a constant stream of glad-handing conversation. He has his appetites for the life of Tahiti, the food, the colors, the nightlife, the natural environment – but he is a voyeuristic appreciator as languidly excited by the violence of a ritual dance as he is by the jaw-dropping scene in which he boats out to witness first hand the giant waves crashing in.

Pacifiction premiered at The Sarajevo Film Festival, when this piece was originally written. It shows in October in the UK at the BFI London Film Festival.