"Dirty gem"
Young female painter is commissioned to create the wedding portrait of Heloise without her realising it, in exquisite romance meditating on subtle male oppression - now available on MUBI

The story takes place in 1770 in rural Brittany. An Italian aristocrat (Valeria Golino) has found a wedding partner for her beautiful young daughter Heloise (Adele Haenel), who just returned from a convent to live with her mother is her enormous estate house. Her husband-to-be lives in Milan, and Heloise has never met him. Her mother commissions Marianne (Noemie Merlant) to paint her daughter in secret because Heloise would never consent to it (presumably because the picture will be sent to her prospective husband). Marianne pretends to be Heloise’s mere companion, working alongside the housemaid Sophie (Luana Bajrami). Heloise’s sister has recently committed suicide, likely due to the prospect of a similar marital arrangement. This means that the burden on Marianne is enormous. Could Heloise too attempt to take her own life?

This is a film almost entirely made by women. The writer director is female, and so is the cinematographer (Claire Mathion). Virtually all the characters are female, too. Men are only seen in the end of this 119-minute movie, in entirely secondary roles. Yet this is a film about men and the subtle ways that they oppress women. Heloise regrets having to marry a man whom she has never met. Marianne is not allowed to become a fully-fledged painter because the artistic establishment prohibits her from studying male anatomy. Her father signs some of her paintings. Sophie becomes pregnant and the burden of an abortion is entirely on her and other females supporting her. While men are nowhere to be seen, the tools of domination and despotism are very visible. 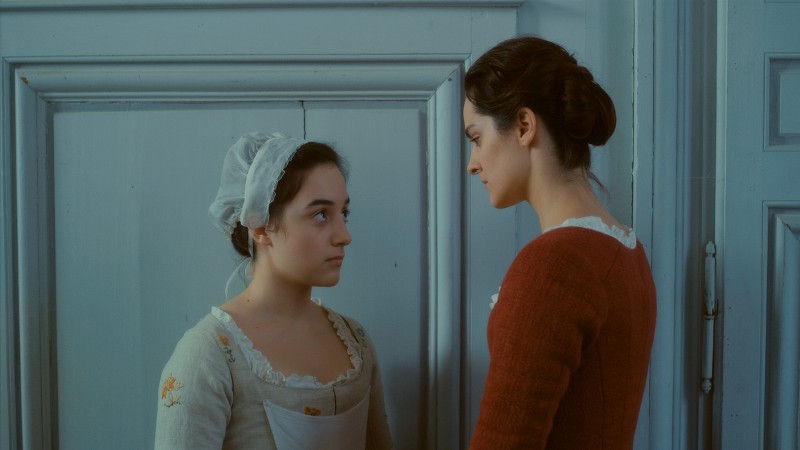 Interestingly, Heloise found freedom and equality in the most unlikely place: the convent. She wishes to return to the institution instead of marrying the Italian stranger. But she then finds exciting in yet another place devoid of males: in bed with Marianne. Marianne becomes increasingly infatuated with Marianne as she secretly observes her subject in order to paint her. She learns to read her every single gesture: a wink, a smile, a grimace, and so on. And vice-versa. Heloise too deciphers Marianne in more ways than one. Once Heloise’s mother goes away for just five day, the romantic liaison quickly morphs into a sexual one. The lovemaking sequences are subtle and sensual, as is most of the movie.

This is also a very erudite movie about the nature of painting and the relation between various types of arts. Marianne attempts to describe the sound of an orchestra to country girl Heloise, noting that it’s virtually impossible to translate music into words. A group of women chant as Sophie undergoes a very strange abortion procedure. The ancient literary legend of Orpheus and Eurydice is the subject of a night reading, and also of one of Marianne’s painting. Plus Marianne is not satisfied with her painting of Heloise, often questioning its connection to reality. Cinema, painting, music and literature complement and comment eloquently on each other.

My only reservation about Portrait of a Lady on Fire is that it gets a little lethargic and stern. The action is so quiet, subtle and observational that it becomes a little disengaging. It lacks the punch factor.

Portrait of a Lady on Fire premiered at the 72nd Cannes International Film Festival, when this piece was originally written. It won the Queer Palm and also the Best Screenplay Prize. It wasn’t the only award-winning film at the Festival this year reflecting on the impact of subtle male oppression. It’s out in the UK in October, as part of the Cambridge and the BFI London Film Festival. In cinemas on Friday, February 28th (2020). It can be viewed on MUBI for 30 days from April, 10th.