"Dirty gem"
A young woman becomes infatuated with a park ride, in this very strange yet plausible tale of forbidden love - Belgian film is in cinemas on Friday, July 9th

It’s 6:00 in the afternoon and a motherly voice announces that breakfast is ready. A flustered naked woman begins to get dressed inside her bedroom. She looks vaguely guilty, as if recovering from a love marathon that began the previous night. Yet there’s no other human being in the bedroom. Instead, she is standing next to a miniature amusement park.

Her name is Jeanne (Neomie Merlant, from Celine Sciamma’s 2019 Portrait of a Lady on Fire), a 20-something-year-old female living with her mother in a small town somewhere in France. She works as a cleaner at local amusement park. She created miniature sculptures of each one of the rides. She plays and talks to her bizarre toys. She has a favourite ride: a fast-spinning scrambler called Move It (pictured below). She affectionately names “him” Jumbo. She is convinced that “inanimate objects have a soul that stick to your soul and force you to love them”. She has a very sensory description of her lover: “he’s cold, he’s warm, he’s hard, he’s smooth”. Merlant delivers a quietly intense performance 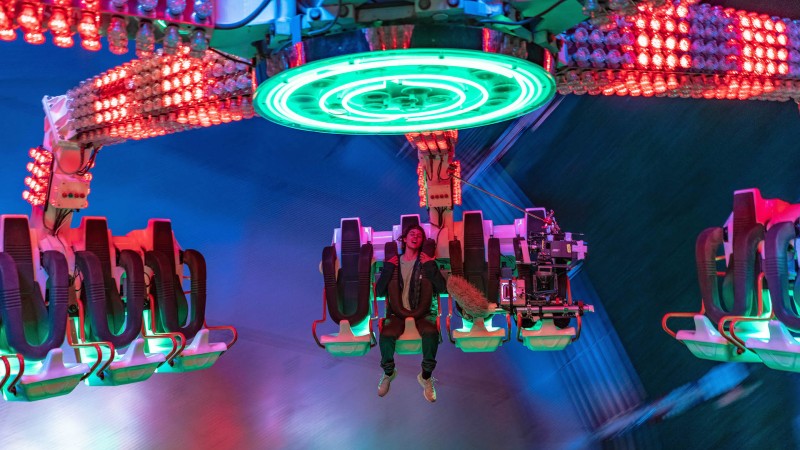 Jeanne’s infatuation with Jumbo quickly morphs into full-blown romance, complete with sexual interaction. She caresses, embraces and talks to the enormous machine. Jumbo responds with an explosion of lights and electronic noises vaguely reminiscent of mumbling and groaning. It eventually gets sweaty and visceral. In the film’s climax, Jeanne gets naked and covered in black fluid, presumably Jumbo’s fuel. These bizarre interactions suggest an absurdist movie, yet the director Zoe Wittock treats her subject with kindness and respect. The outcome is a palpable and even credible romance.

Not everyone is as accepting as the filmmaker. Jeanne’s mother does not consent to her daughter’s unusual relationship, and the local kids constantly taunt and humiliate her. Jeanne remains defiant. Despite the barriers, she is willing to take the relationship to the next level. She eventually finds tolerance in the most unlikely of places, and someone who could help her to convert her mother. The final resolution is both awkward and cathartic. You will leave the cinema with a smile on your face, prepared to reassess the relationship with your favourite objects.

The film is based on a real story, we’re told. And objectophilia (the sexual or romantic attraction to inanimate objects) does exist. For three real stories, watch the documentary Married to the Eiffel Tower (2008), directed by our writer Agnieszka Piotrowska.

Jumbo is in cinemas on Friday, July 9th.