The Employer and the Employee (El Empleado y el Patrón)

Rodrigo (Nahuel Perez Biscayart) and Carlos (Cristian Borges) are roughly the same age and they both have a family consisting of a wife and a baby. That’s where the similarities stop. Rodrigo is the son of a rich farmer, used to a life of luxury. He can party and travel freely, and he always has money and drugs in his pocket, prepared to bribe his way out of any legal challenges that might surface. Carlos knows little outside farm labour: every day he drives a tractor along the very vast Las Pampas plains that cover virtually all of Uruguay, the small South American country where the story takes place. Carlos has neither the means nor the skills to challenge the firmly established employer-employee orthodoxy.

Carlos’s life is in many ways analogous to slavery, minus the flogging. He’s hard-working, non-confrontational, non-ambitious and entirely unaware of his rights. A rural hierarchy fitting for the ol’ days and neoliberal times alike. Due to poor working conditions, disaster eventually strikes. Carlos blames himself alone for the tragedy that cost him his own blood. He does not understand that his employers have a responsibility towards him and his family. He’s trapped in an inescapable loop. His lower class status finds novel ways of reinventing and perpetuating itself, often unwittingly. Fate does not seem to be on Carlos’s side. 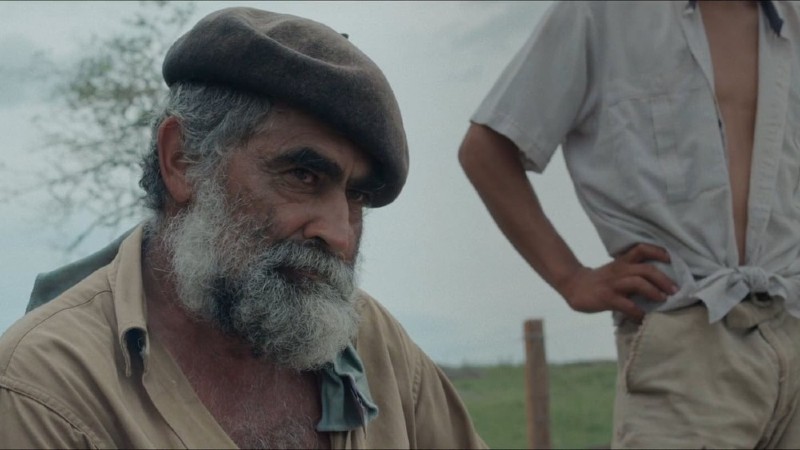 The narrative arc of this quiet rural drama is mostly flat, much like Uruguay’s vegetation. Sparse bumps and ditches cater for the most emotionally-charged scenes. There is little rebellion and disobedience. Instead, Carlos drowns his sorrow in alcohol at the local brothel, aided by a shrewd Rodrigo. The relationship between the employer and the employee is intended to move forward unchallenged.

The oppression is very subtle. Rodrigo is neither violent nor authoritarian. Humiliation comes in perfidious little comments, often from other people. “He gets paid to laugh”, says a guest. A very auspicious Biscayart delivers an impressive performance, impersonating the conveniently complacent and deceptive boss. There is a hint of preoccupation in his eyes: it’s not for his employee’s well-being, but instead for his very own financial security. Biscayart is a very fast-rising Argentinean talent, who you might recognise from 120 BPM (Robin Campillo, 2017) and Persian Lessons (Vadim Perelman, 2020). Indeed skilled and multilingual.

The Employer and the Employee has just premiered in Cannes, as part of the Directors’ Fortnight. A quietly perceptive drama that will likely move beyond the festival circuit.

A Jew pretends to be Persian in order to avoid death in a concentration camp, only to be forced to teach the language over which he has no command - on Amazon Prime on Sunday, April 18th (and also on other platforms) [Read More...]

Wacky Argentinian comedy-horror deep-dives into the twisted psychology of a female dubber and singer - from the BFI London Film Festival [Read More...]