"Mostly clean movie"
Fans of Christopher Landon’s Happy Death Day movies might enjoy his new horror/comedy Freaky; everyone else will find it more than a little creaky - in cinemas now

The latest offering from Blumhouse combines Freaky Friday (Gary Nelson, 1976) with Friday the 13th (Sean S. Cunningham, 1980; incidentally its original title was Freaky Friday the 13th) by having a serial killer (Vince Vaughn) swap bodies with a teenage girl (Kathryn Newton). It is far from the first slasher flick to employ a body-hopping device – eg. Child’s Play (Tom Holland, 1988), Shocker (Wes Craven, 1989) and Jason Goes to Hell: The Final Friday (Adam Marcus, 1993) – and knowing Blumhouse’s penchant for a sequel, it will not be the last.

This is a pity, as Freaky runs out of steam some 10 minutes into its 100-minute runtime. Landon grafts the Freaky Friday premise directly onto the slasher formula without considering how the two might best be combined, resulting in a boring mess that works as neither body-swap comedy nor horror film. It should go without saying that for the swap to function we need to believe (or at least imagine) we are seeing the original characters in the opposite bodies – think Face/Off (John Woo, 1997) or Being John Malkovich (Spike Jonze, 2000) -, which proves as far beyond Vince Vaughn’s acting capabilities as playing Norman Bates (in Gus Van Sant’s Psycho, 1998). 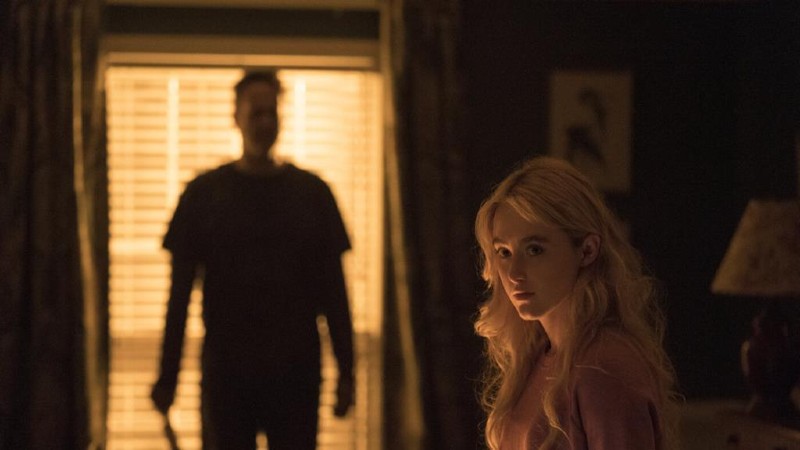 In terms of worst performances of the year, Vaughn gives Chris Rock in Spiral (Darren Lynn Bousman, 2021) a good run for his money. The best that can be said for the actor is that he has not spent much time around teenage girls, his embarrassing caricature in no way resembling Newton’s character. He is not helped by Landon’s only direction appearing to have been “run like a girl,” nor his script that turns the wallflower we meet much too briefly at the start into someone who loudly verbalises her every thought. Even if we put this major personality shift down to the newfound confidence that comes with her male body, she remains passive in all but conversation, spending much of the movie waiting in cars for her tokenistic friends to advance the plot.

The idea that we would only know Vaughn is playing a woman because he is talking a lot exposes not only Landon’s limitations as a writer, but also a lazy sexism that marked Happy Death Day (Landon, 2017) as well, sharing its cheesy sentimental streak that people watch horror movies to avoid. And the sexist stereotypes cut both ways; the notion that strong men feel invincible is pernicious too. The equation of physical strength with emotional strength is as unhelpful as the jokes are unfunny.

Even the body-swap setup feels oddly binary in the current climate, and the film avoids exploring any interesting themes thrown up by its premise as though scared of its own shadow – not least the kiss between Vaugn (as the teenager) and her high school crush, which might have been strangely sweet had we thought for a second that he was actually her. At least if they had properly committed to the kiss it would have been a bit freaky. Instead it is Vince Vaughn awkwardly fumbling with a teenage boy in the backseat of a car. Can we close cinemas again now?

Freaky is in cinemas now.