"Greasy movie"
A widow poses a cleaner in order to penetrate the intimacy of her late husband's secret family, in a British drama about heritage, religion and fractured identity - on VoD on Sunday, August 22nd

After the sudden death of her husband Ahmed (Nasser Memarzia), Dover resident and Muslim convert Mary Hussain (Joanna Scanlan) discovers he had a secret family in France and heads to Calais to meet them. In the throes of grief she finds herself unable to disclose her true identity, instead disguising herself as their cleaner, on a mission to learn Ahmed’s secrets.

This British drama (let’s call it Mrs. Doubtful) is at its best when ruminating on the nature of grief and identity, finding power in moments as small as when our widow affectionately cooks a traditional dish or accidentally makes two cups of tea. At worst it slips into unlikely melodrama, as Mary intrudes ever closer into the French family’s lives.

Like A Fantastic Woman (Sebastián Lelio, 2017), After Love is set in the aftermath of a man’s death and explores the identities of the women he leaves behind. As in Lelio’s film, the patriarchy is still intact without the patriarch, with both the French and English women forced to deal with their abandonment by Ahmed – which actually occurred before he died. 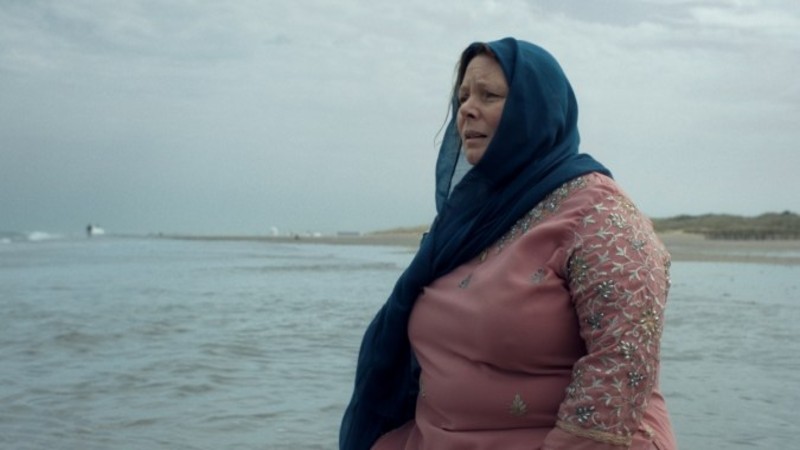 Writer/director Aleem Khan draws inspiration from his own mixed heritage, religion and sexuality, a fractured identity reflected in none too subtle images of split mirrors and cracking ceilings. The White Cliffs of Dover crumble symbolically in front of Mary’s conspicuously white face, the sound a rumbling echo of her devastation.

Scanlan is quietly fearless in the role, a world away from flustered civil servant Terri in the sitcom The Thick of It. She channels waves of emotion in the subtlest of facial expressions, shoring up the histrionics that threaten the credibility of the drama. Even when Mary’s behaviour crosses the line, the film is never less than compassionate and non-judgmental.

After Love’s uncomfortable intimacy, brilliant central performance and authentic combination of English, French and Urdu make for an interesting picture which, like Mary, would benefit from taking a step back.

After Love is in cinemas on Friday, June 4th. On Amazon Prime on Sunday, August 22nd.