"Dirty gem"
Chaotic music intoxicates the tumultuous urban landscape of the Peruvian capital, in this highly sensory and hypnotic doc - showing at the Barbican

The noises are both pervasive and invasive. They penetrate every corner of the titular city. These bizarre sounds constitute a violent and strident urban symphony. Highly distorted guitar chords are blended with yodeling synthesisers, the humming of microphone feedback, singing, chanting and even a diabolical rendition of the Holy Mary Mother of God prayer. This is indeed music, thoroughly enjoyable in its magnificent madness.

This non-narrative, sensory documentary feels a lot like an experimental music album, at a taut 73 minutes. A music album you enjoy inside the cinema in the company of strangers: the numerous unnamed characters. The denizens of Lima are male and female, young and old, their rich facial expressions exposed in colourful detail in the numerous close-ups. Some of these people are at the coalface (making and singing music), while others are mere passersby in a metropolis with nearly 11 million inhabitants. Passing cars, street food sellers and even a lonely goldfish are provided with their very own music score. 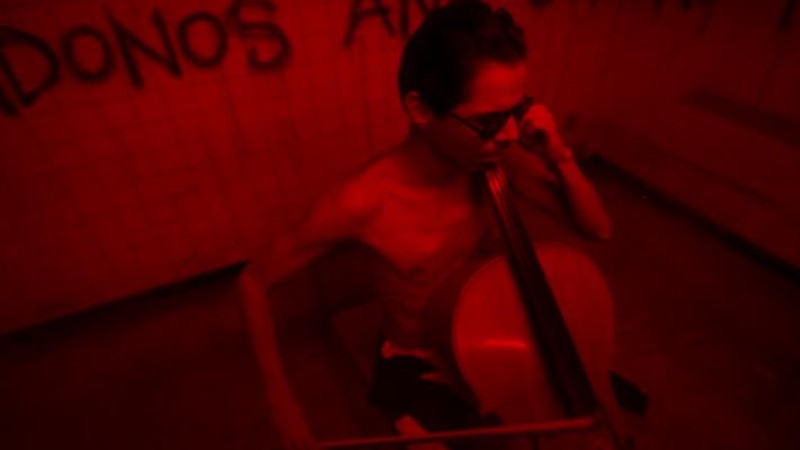 This cacophony of sounds is accompanied by a kaleidoscope of somber images illuminated by multicoloured neon. There is virtual no natural light. All is wrapped up in abundant dust, smog (Lima is a heavily polluted city), fog machines and the smoke from cigarettes. The outcome are blurry, warped images with high hue contrast, often juxtaposed. It feels ethereal, even spiritual. One of the snippets of dialogue explains it: music is cosmic energy, the musician is a shaman.

This music score is rarely synchronised with the images at display, conveying a soothing sense of a alienation, plus creating an eerie atmosphere, virtually detached from reality. Music is cathartic, music is oneiric. Get ready to savour a heady cocktail of psychedelic music, laced with splashes of enigmatic dialogue and sprinkles of urban chaos.

Lima Screams premiered at the Sheffield Doc Fest, and it shows at the Barbican on Thursday, June 10th. Full immersion inside a movie theatre is highly recommended – so ideally don’t wait until this comes out on VoD.