"Dirty gem"
Oscar-nominated doc largely told from an American perspective depicts US presidents (particularly Bill Clinton) as cautious negotiators of the Israel-Palestinian conflict - out on Friday, May 21st.

The most eerily prescient documentary release of them all, The Human Factor arrives onscreen amidst the uproar culminating across Ireland, England and the rest of Europe. We’re referring, of course, to the conflict between Israel and Palestine, a battle that not only crosses religious grounds, but disputes the rightful ownership of a land surrounded by desert, duty and riches.

In this taut documentary heavily reliant on talking heads, the Israeli filmmaker Dror Moreh attempts to piece together a coherent narrative that can provide context to an extremely complicated history. Though the film struggles to keep up with the turbo charged events that occur, it does at least offer a nuanced depiction of a quarrel that pivots from the walls of Jerusalem, to the sanctuary of the American White House. The outcome is a behind-the-scenes story from the past three decades or so.

Bill Clinton enters the story, in an effort to earmark a form of change from the more tactile tactics favoured by his immediate predecessor. The story, framed from an American perspective, is largely told by a team of American negotiators, detailing the intricate nuances felt on both sides. Empathy, we are told, wasn’t favoured by either Israel or Palestine. Clinton offered a neutral ear by which Israeli Prime Minister Yitzhak Rabin and the Chairman of the Palestine Liberation Organization Yasser Arafat could turn to. 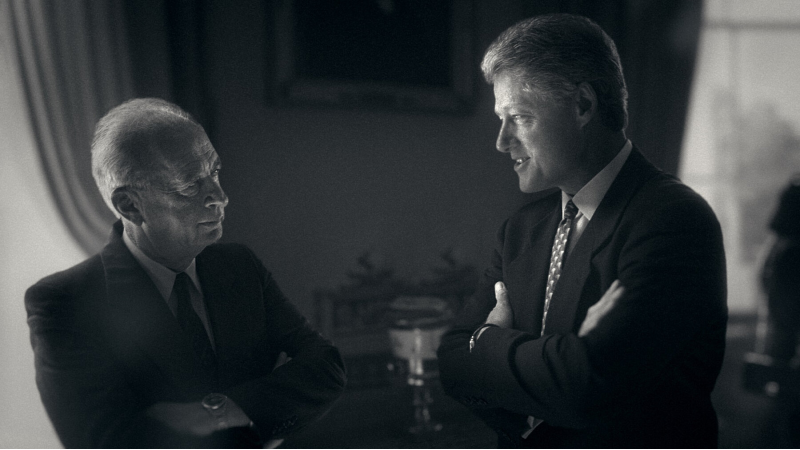 Fueled by their personal and political ideologies, the two men shared a series of tense meetings, demonstrating their viewpoints of a land shaped by conflict, chaos and conditions. Rabin’s actions proved thorny among hard lined Israeli citizens, as hordes of protesters took to the streets to paint their leader a “traitor”. Rabin was assassinated by his own people in 1995, further contributing to the hatred and hostility.

The doc offers an insight into the negotiations, as American Presidents cautioned themselves to roles of diplomacy or diligence. Where the newest President, Joe Biden, will take them has yet to be seen, but this is a formidable edifice about a time of tremendous historical impact. In a world where Israeli rockets count as the lexicon of peace, it’s not likely that there will be any resolution coming in the near future.

The Human Factor, which received an Oscar nomination for Best Documentary, is out on various VoD platforms on Friday, May 21st.