Irish filmmaker Eoin Macken talks about adapting Rob Doyle’s novel HERE ARE THE YOUNG MEN, the challenges transposing literary lexicon and structure onto the silver screen, toxic masculinity and much more - in an exclusive interview

Macken has modelled for GQ and Ralph Lauren, and he directed the 2009 documentary The Fashion of Modelling, an exploration of the aesthetic of the photograph. His narrative feature debut was the psychological thriller Christian Blake (2008), followed by Dreaming For You (2009), about a suicidal man whose troubled relationship with his girlfriend is complicated when he meets a tramp. In 2013 he directed Cold, the story of two brothers who outsiders in their community in the west of Ireland, and are drawn together by the death of their father and discovery of a dead girl on the moors.

In conversation with DMovies, Macken discussed exploring the reality of youth in a viscerally and honest way, and his personal impressions of the hyper-arousal of America for young Irish men.

Paul Risker – ‘What we are’ versus ‘who we feel we are’ can often be out of synch. I’ve spoken with directors who say that it took a number of films before they felt they could call themselves a filmmaker. Do you feel that you can call yourself a filmmaker?

Eoin Macken – I honestly don’t know if I’d call myself a filmmaker yet. What I love about filmmaking is being a part of the process of storytelling with others. It’s a collaboration, and you get to work with people who know so much more than you do, and the buzz of creating a story and being involved in that has fascinated me.

All I did when I was a kid was read, and then suddenly you’re able to put these stories onto a screen and add music. It’s fascinating, but I don’t know if I’d call myself a filmmaker – I don’t know if I know what I’m doing. I just know what I like and what I’m trying to make, and I know I have all these other stories I want to tell.

PR – Was it your intention to penetrate the romanticisation of living out of one’s head, of dreaming, as the reality of being free from the educational institution dawns on the four characters?

EM – First and foremost I wanted to make something that hopefully felt universal. The movie is based off the book and it’s set in Ireland in a certain time period, and I wanted to be very specific about that. I dragged some stuff from a book I’d written and my own experiences into Rob’s work. I wanted the story to be universal so that it felt if you transposed these characters to Canada, America, Germany, or Brazil, they’d be variances of the same people.

The book actually has four characters in it, and I changed it to three characters, taking bits and pieces of the four to make three more specific characters. The thing about reality, and especially the reality of youth is when you’re in a night club and listening to music, nothing else matters apart from your world and your spectrum around that. You can go into a club and this one song will come on, and your mood is lifted. It doesn’t matter if you’re drinking or you’re doing drugs, whatever it is, the endorphins in that moment are suddenly elevated.

It can be the same when you walk down the street in New York for the first time. Whatever you’re listening to at the time, it could be Led Zeppelin or the Sugarbabes, that is now your reality of, “this is awesome.” This is what these kids experience, and so I wanted to get at that, but also the negative side of it in terms of when your thoughts go to a dark place, what is it that also brings you down. I wanted to try to make it as visceral as possible through the film, and explore it in whatever context it made sense to.

PR – Should an adaptation be an extension of the source material, less about being faithful to the narrative, and more about honouring the spirit of the story and its characters?

EM – Myself and Rob had a chat about this and I told him I needed him to trust me to change things. If I’d made a little adaptation of his book, I don’t think he or I would find that interesting.

A lot of the music that’s in the film I listened to when I was reading the book. I wanted to make something that was visually and cinematically interesting, and had this energy for me that grabs as much of the tone of the book.

I changed it to make it more of a linear story, and to give it more of a purpose, because there’s something about the morality of the characters I wanted to say in the movie, that comes through in the book. The main thing was getting the crux of the tone of the novel and the characters, and that world, then taking a semblance of that story and making something of a through-line.

It was the interpretation of what the book and the characters meant to me, and what they should be. It’s not a literal adaptation, there are things in the movie that never existed in Rob’s story. You want to make something that stands side-by-side, but is not the same because I’m a different artist to Rob. We write differently, he sees the world differently, he has a different lexicon and we structure sentences differently. We therefore watch and listen to movies differently, so this is my version of what this and what my art is. 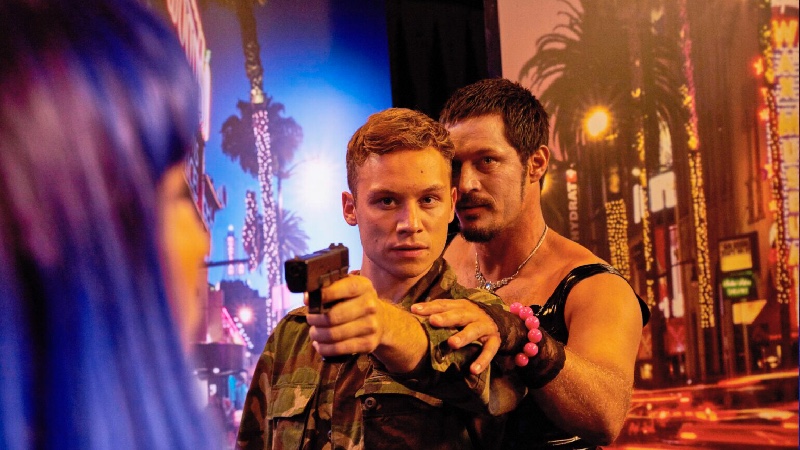 PR – What was the thought process behind the visual flourish of Kearney going to America and the game show? Is it an acknowledgement of our tendency to self-project, and of our self-awareness of being players in our own life stories?

EM – I wanted to try to utilise Kearney going to America and that TV gameshow as a metaphor, and also being reflective of what was going on his head. I didn’t want it to be this thing where he was becoming totally psychotic. When he’s watching this gameshow he’s seeing his own interpretation of it. He’s projecting his own ideas and thoughts, he’s seeing and hearing what he wants to.

When you first go to America everything is different, especially when this was set, which is almost twenty years ago. From my experience America seems so much bigger, and there are so many things that are different, especially from an Irish point of view. He’s obsessed with the army and we don’t have an army in the same shape and form. You’re not allowed to own guns in Ireland, but you can in America. From that naive teenage point of view, when you’re dealing with that toxic masculinity route Kearney goes down, everything seems a lot more powerful, violent and accessible, and that’s what I wanted to ease into.

… I remember being fascinated when I went to America for that first time because I felt there was a freedom, and so I wanted to put Kearney in this different world, where it felt like he was in control of his own life and his own world. This is how he interpreted it. He’s taking all the negative parts of it because that was what he was leaning into, and that’s the part of the psyche that he allowed himself to fall into. I didn’t want it to be too much of a dreamscape, I still wanted to keep it visual in a way that was clearly a metaphor in his head, but still keep it grounded because it needed to be his fabrication of it.

PR – The story is about the anxiety of youth, with a particular attention to how our choices define us, bringing to it a moral consideration.

EM – My hope when people watch it is that they do get that feeling. Matthew becomes the character who could go any of these three or four different directions. He’s still learning who he is and it depends on the choices he makes, psychologically and emotionally, that will then start dictating. If you make a mistake when you’re younger, you don’t forget that. It stays with you, and so I wanted to get that across in the sense that while none of them understand what they’re doing, they’re all doing specific things.

Suddenly one character decides to go down this violent route, and Matthew’s pulled down it as well. I wanted to explore the idea of facing up to that moral dilemma that he’s faced with, but it’s also about how other people see his interpretations of it.

When he goes into the TV world for a moment, I wanted it to be a mirror reflection, and it’s deliberately ambiguous. Kearney has his interpretation of how Matthew sees things and what he’s doing, and Jen has her specific interpretation of what Matthew’s doing. So it’s not just Matthew making his decision, people end up having a ripple effect all the way through. I wanted to try to explore how for every decision you make, someone else is influenced by it. Then, even if you think you’re making the right decision, it might be the wrong decision because of how it affects someone else.

Here Are the Young Men is out now on VOD and DVD.

Two theology students grapple with the authoritarian Czechoslovakian regime and the collaborationist Catholic Church, in this somber and poetic period drama - on Curzon Home Cinema on Friday, May 14th, and also in selected cinemas [Read More...]

Transgender boy finds kindness and acceptance in his clumsy cowboy father, and the two literally run away together - on Curzon Home Cinema and Digital download on Friday, May 7th. [Read More...]

As a mysterious disease leaves people amnesiac, a hapless man is left without memories and the ability to have pleasure - superb Greek movie is on Curzon Home Cinema on Friday, May 7th [Read More...]