"Dirty gem"
Transgender boy finds kindness and acceptance in his clumsy cowboy father, and the two literally run away together - on Curzon Home Cinema and Digital download on Friday, May 7th.

Troy (Steve Zahn) is an warmhearted and doting dad, if a little clumsy and short-tempered. His 10-year-old daughter Josie (Sasha Knight) adores him. They enjoy a relatively peaceful and functional life with Josie’s mother Sally (Jillian Bell), who is far more introspective and stern. But there’s one little problem. Josie is transgender. She insists that she was born in the wrong body, and asserts that she in fact a boy called Joe.

Troy is entirely supportive of Josie’s transition. At first he’s a little confused as his daughter comes out as trans one day inside their vehicle, in the movie’s most moving sequence. Yet he never resists Joe’s gender choice, and gradually becomes very supportive of it. Violently supportive even. Sally is far less accepting of her son’s transgenderness. She thinks Joe’s admiration for his father is to blame for his decision to embrace the opposite gender. Plus, the mother believes that her boring housewife life has caused her daughter to reject being a female. She puts it succinctly: “who chooses to be a girl”?

Troy’s character is very complex. He blends an old-fashioned type of masculinity (the literal cowboy, with a scruffy beard, hat, boots et al) with a sensibility often associated with the female world (the unconditional kindness and acceptance normally associated with the mother figure). He’s goofy and not particularly intelligent, yet very loving and tolerant. Zahn does an outstanding job juggling these traits, with the director Anna Kerrigan helping to ensure that the performance never slips into cliches. The outcome is a dirtyliciously flawed type of masculinity: a cowboy who cries. Bell and the little Knight are equally convincing in their multidimensional characters. 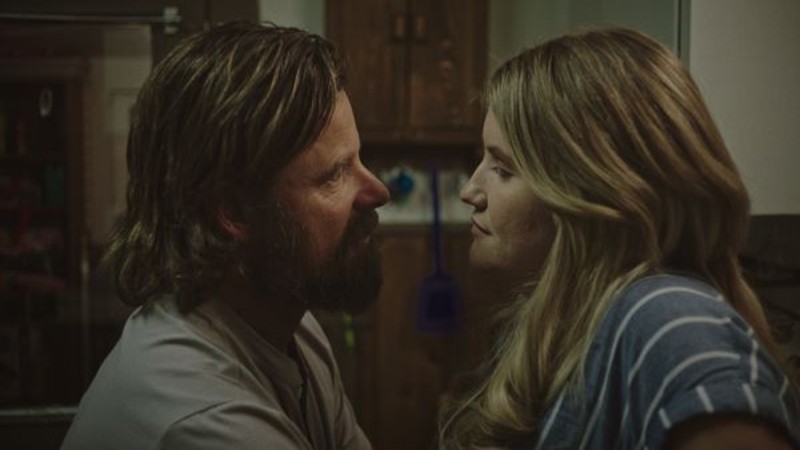 The narrative isn’t straightforward. The film starts with Joe and his father running away, and his estranged wife reporting the kidnap to be police. In reality this isn’t an actual kidnap. Joe is willingly running away for his transphobic mother. Father and son gallop into the Montana wilderness towards the Canadian border, as the police quickly chase them. The film zigzags back and forth in time, gradually revealing the ordeal that drove the titular cowboys to abandon their home in order to reach a foreign country. We also learn that Troy has already served time, for a very peculiar reason. Two stories run in parallel: Troy and Joe on the run versus the developments that led to Troy’s arrest and separation.

Strong performances, a gripping script and a stunning cinematography of the verdant mountains of Montana make Cowboys recommended viewing. My only reservation is about the film ending: while very surprising, its is also a little romanticised.

Cowboys is out on Curzon Home Cinema and Digital download on Friday, May 7th.

The ill-fitted skin I live in: British transgender teen drama succeeds to highlight the plight of transitioning, and on a football minefield - on DVD and VoD [Read More...]