"Mostly clean movie"
The internet's first unregulated marketplace becomes rife with illicit drugs, in the real-life story of the young and idealistic Ross Ulbricht - on VoD on Monday, March 22nd

This is a dramatisation of the story of Ross Ulbricht, the alleged “Dread Pirate Roberts” who ran the website known as Silk Road. It states from the beginning that it doesn’t exactly follow the facts (“this film is a product of journalistic research and wild flights of fiction”). It brings in the “drama” by telling most of the story through the eyes of a composite Fed, Rick Bowden (Jason Clarke), who is shown as a middle-aged guy who doesn’t know much about computers at first and thinks that people are buying drugs off YouTube, when surely the FBI and DEA agents these days are a bit more clued up about the long history of drug sales online. The character of Bowden is intentionally painted as sympathetic, yet he behaves like a real crook. He fakes an execution to get Ulbricht on a murder-for-hire charge. It also has to be said that using a composite to represent one side of a story like this, when the opposite party is a real person serving consecutive life sentences plus an extra 40 years, is pretty dodgy.

The story begins with Ulbricht about to get arrested, then flashes back to him as a naïve right-wing libertarian kid. He’s got issues with the state, but he never goes into much detail about it on-screen. Bitcoin is on the rise, and it’s presented as if one day the utopian idea of an eBay/Amazon-style marketplace for drugs where buyers could pay with Bitcoin, and rate and review the sellers, pops into his mind, with packages sent out by the US Postal Service. A good idea in theory… but it didn’t quite work out. The intent was to avoid selling anything involving violence – such as weapons, child pornography or hitman services – yet all of this inevitably happened. The notable intent behind making a safe and secure marketplace to sell drugs rated and reviewed by the site’s users is something that united both right and left wing libertarians.

As the film moves forward, we see a lot of footage of Ulbricht on his computer—not the most exciting thing to watch—and this is interspersed with Bowden’s story as the investigation begins and continues. There’s a side-plot romance with Julia Vie (Alexandra Shipp), but she isn’t given much to do. It makes Ulbricht out to be some kind of genius-behind-the-scenes, but this seems unlikely based on what others have said. Nick Robinson plays Ulbricht, and he’s absolutely fine, but there isn’t much in the way of cat-and-mouse action as the net closes on Ulbricht.

Clark is a fine actor, but he has a bland persona. His turn as Ted Kennedy in Chappaquiddick was quite good, but here there are no zingy lines, action sequences or personal dilemmas to bring it to life. The only tension is between the DEA agent’s own drug and alcohol problems and the nature of the case they are pursuing. Paul Walter Houser – from I, Tonya (Craig Gisllespie, 2018) and BlacKkKlansman (Spike Lee, 2018) – plays a Silk Road drug dealer. That’s the latest in a string of roles as the kind of guy who lives in his mother’s basement and spends all his time on 8Chan. 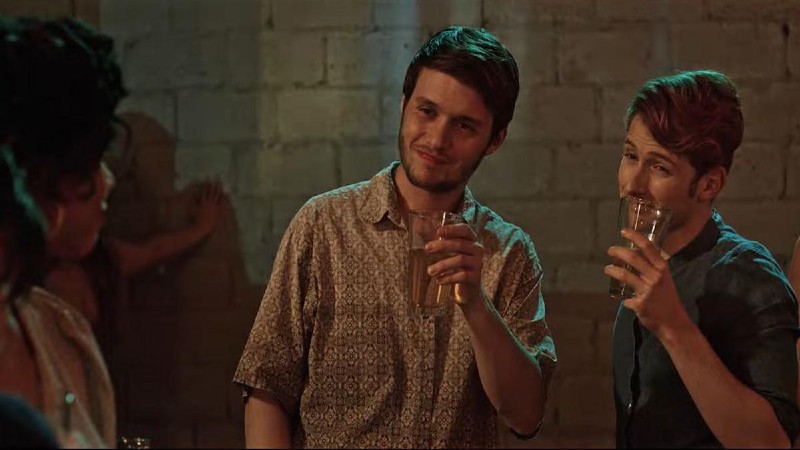 It’s very likely that Ulbricht did create the site, but whether he actually ran it is questionable, as are the charges brought against him and the methods used to catch him. However, the film doesn’t really take any point of view on the events, and that’s one of its problems. The script is tedious. It never helps the viewer understand Ulbricht’s motivations. Was Silk Road some kind of honourable experiment, or is Ulbricht a psychopath? While it takes the version of events put out by the Feds, it doesn’t go all-out from their side either, it just limps along, a complicated story done in a pedestrian fashion.

Silk Road wants to be The Social Network (2010), but without the cynicism of David Fincher, that’s not happening. The director Tiller Russell does not paint Ulbricht as a monster, like Fincher does with Zuckerberg. The highlight of the film is a girl exclaiming in disgust: “seriously, I just fucked a libertarian!”, whereas Fincher has the style, editing chops and ability to find the drama in a situation and engage the viewer.

It’s shot in a slack, TV-like style by a cinematographer and director whose backgrounds, unsurprisingly, are mostly in documentaries and TV. With a $6 million budget, it should have been possible to generate some atmosphere, but instead there is just plain, competent yet run-of-the-mill shot composition and pacing. It might have actually worked better as a four-part mini-series, which would have offered space for more background and character depth.

Many copycat sites have popped up since the Silk Road was shut down, so giving Ulbricht life in prison hasn’t exactly had the impact they might have hoped. The documentary Deep Web (Alex Winter, 2015) is much more thorough, going into the various moral and philosophical reasons behind the Silk Road project and the “darknet” in general. Silk Road, however, is the kind of film you’re going to find on a streaming service at 1:00 in the morning.

Silk Road is out on VoD on Monday, March 22nd.