"Greasy movie"
We hold our breath fearing the fragile dream of the young dancer in this impassioned love letter to the aspirational journey, set in Tokyo’s urban dance scene – from the Fantasia Film Festival

The metaphor about the danger of playing with fire is a familiar one to us all. In Canadian filmmaker Philippe McKie’s Japanese urban dance film, the dangerous flames are those that emerge from daring to dream. It’s a spirited tale of the fragility and strength of hope. The title even has an apt double-meaning because fire is a force of destruction, but in the context of the pursuit of one’s dreams, it can be symbolic of a life illuminated by the transformative flames of success.

The young dreamer in this tale is Yume (Bambi Naka), who rebukes her father’s instructions and runs away to Tokyo to become a dancer. The difficult reality of achieving success soon sets in, and penniless, she finds work as a hostess in Tokyo’s red-light district. She continues to study and integrate herself into the dance community, never giving up on her dream.

From the beginning we feel we’re in the company of a storyteller brimming with confidence, who is unapologetic for his vision. Dreams on Fire will not please everyone, and there will be those that will accuse it of being an aspirational story that saunters, failing to explore deeper themes and ideas. This is to perhaps miss the filmmaker’s intention. A stylised story, it’s an unrestrained love letter to the aspirational journey that he chooses to not weigh down. He pays tribute to the arduous pursuit his protagonist undertakes, and the storyteller and character are not completely divisible from one another, as he concludes a significant step in his own creative journey.

At an 120-minutes it’s not short, and what struck me was a moment when I realised the passage of time that had come and gone. Thinking about our own lives, we lose sight of time, coming to realise that it’s passing us by of its own volition. In hindsight, our experiences are not necessarily what we pictured in our mind, and this is true for Yume. Finding a brevity in the time the story covers provokes a feeling that while we’ve been following her, we’ve been lost in a trance.

Emphasising the focus on the human body and its movement, the choreography of a single or group of bodies becomes hypnotic. Watching the young woman dedicated to training her body, perfecting her craft draws us in, and nestles us into the fierce ambition where perhaps dance is more important than life itself. While the world continues to move around her, it feels that she’s on her own plane of existence. The dance and music set pieces add a dreamy layer to the trance like feel, that in one scene conveys a deep eroticism, and in another a surreal nightmare. 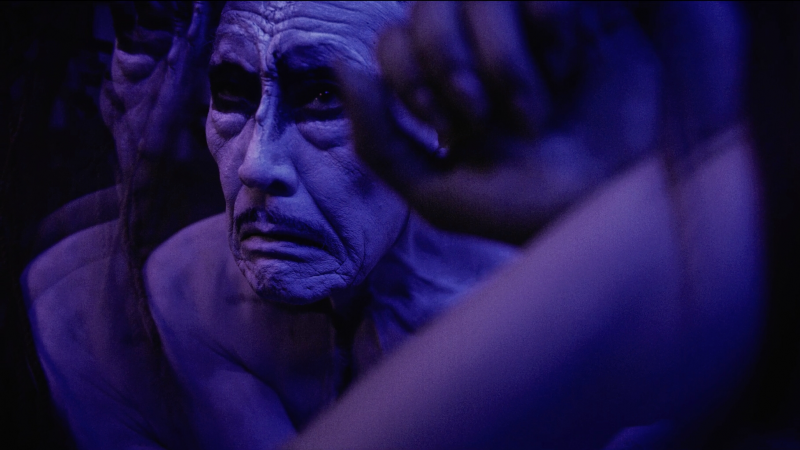 A single viewing of Dreams on Fire is not enough, it requires a second viewing to see through this trance, to see clearly what she feels, when she feels it, how and when the journey takes shape.

Ironically, Bambi Naka plays the young and aspirational protagonist, who herself knows what it is to have this dream. Alongside her then romantic partner Aya Sato, she was one half of the duo AyaBambi, the lead dancers for Madonna on a two-year world tour. She plays Yume with a vulnerable shadow, even as she finds confidence and sheds her meekness. When another dancer she replaces in an ensemble warns her about the peril of injury, we find ourselves intermittently holding our breath. We realise that the smallest misstep, whether dancing or not could be disastrous, and we fear for her fragile dream.

Dreams on Fire is about characters on the fringes, but it’s not a cold or lonely space. While she lives in a bare and cramped apartment, she’s integrating herself into a community full of life. The harsher reality would be denying herself a chance at her dreams by remaining at home. With an optimistic eye, McKie shows the warmth of belonging to the fringes. A mature piece of storytelling, it does not play to either the saccharine or cold cynicism, instead it honours that joy and the sorrow go together.

If the film is a love letter to Tokyo, the Canadian filmmaker’s spiritual home having left film school in Montreal to spend 10 years living and working there, for us it’s neither a love letter to a city, nor any fringe culture. For western audiences it’s a look into the Japanese urban dance scene, that only scratches the surface of this cultural phenomenon, and other Japanese subcultures. As an unrestrained love letter to the aspirational journey, it’s also an expression that life is an empty shell we must fill with purpose and meaning, that exposes us to both the fragility and the strength of hope.

Dreams on Fire premiered in March at Glasgow Film Festival, when this piece was originally written. It shows at the Fantasia International Film Festival (in Quebec) in August.

The flush of first love is excellently rendered in this touching Ukrainian coming-of-age drama - live from Berlin [Read More...]

British horror expertly recreates the video nasties of the '80s, as well as the moral prudity of the time, weaving them into an effective gore-fest - on VoD on Sunday, October 31st [Read More...]