The Last Forest (A Última Floresta)

"Greasy movie"
The ancient Yanomami people live in harmony and balance with the environment, but their very existence is once again under threat thanks to Bolsonaro's murderous regime - from the Tallinn Black Nights Film Festival

The Yanomami tribe have been living in the Amazon rainforest and mountains of the Venezuela-Brazil border region for over 1000 years. Today their total population stands at around 35,000. Over several decades, various Brazilian governments have disturbed their natural habitat for the sake of infrastructure development, bringing along outsiders who spread diseases to the natives. The biggest threat came in 1986 when the discovery of gold deposits in Yanomami land led to an invasion by 45,000 prospectors and the subsequent death of 1,500 to 1,800 natives. And, after the notorious Haximu Massacre in 1992, international support started pouring in for the Yanomami people, and their leader Davi Kopenawa got the Brazilian government to enforce a law that would keep the prospectors out of Yanomami land. But 25 years later, since Jair Bolsonaro took office in 2019, over 20,000 gold prospectors have penetrated their living environment, bringing with them Covid-19.

Brazilian filmmaker Luiz Bolognesi (Ex-Shaman, 2018) teams up with Davi Kopenawa to document the grave and dangerous situation in which the indigenous people are living, and through his ethnographic documentary, The Last Forest attempts to draw the world’s attention to a neglected community and their way of life. Bolognesi offers us a peek into their minimalistic lifestyle and customs that are in absolute harmony and equilibrium with their immediate environment. The Yanomami live in large, circular, communal houses called yanos or shabonos. The central area is used for activities such as rituals, feasts and games. Each family has its own hearth where food is prepared by women and cooked during the day. At night, hammocks are slung near the fire which is stoked all night to keep people warm. Like most Amazonian tribes, tasks are divided between the sexes. Men hunt for meat like peccaries, alligators, tortoises and monkeys. The womenfolk apart from cooking and rearing the children, are also involved in gardening and making wooden baskets that are sold to the non-natives.

Davi Kopenawa serves as the film’s narrator and central figure through whom we learn about the culture of the tribe and its origins. Like most ethnographic accounts tracing lineage, the history of Yanomami is also studded with myths and folklores that make for interesting magical stories. Kopenawa explains the legend of two brothers Omama and Yoasi, who were the only humans on this land thousands of years ago along with supernatural beings. It was through the union of Omama with Thueyoma, who lived underwater, that more humans were born. 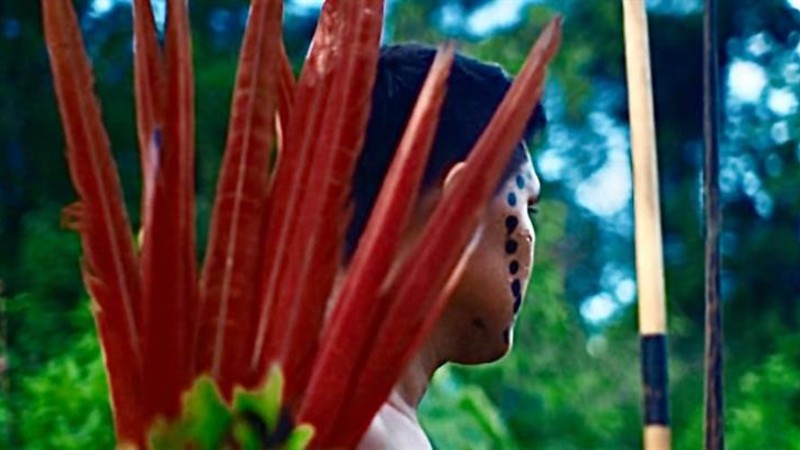 The Yanomami trace their ancestry to Omama and worship his spirit. Yoasi is believed to have unleashed many evil spirits who were buried deep in the earth by Omama. Kopenawa and his tribe engage frequently in shamanic rituals to ward off these evil spirits that are believed to spread deadly diseases. He is critical of the miners who excavate the land and release disease-inflicting spirits; and also warns his people to stay away from the gold prospectors who try to lure them with products and gifts. Many rivers have died in the region because of the prospectors who poison the water with mercury. Kopenawa, who has lived and worked in cities in the past, knows very well the cons of urban life and the racist attitude of white people towards the natives.

Towards the ending of The Last Forest, Kopenawa is seen delivering a lecture at Harvard University where he tries to educate the listeners about the perils of materialism. He emphasises the importance of preserving the forest ecosystem for their survival and advocates a natural lifestyle over consumerism and greed. Bolognesi’s film not only raises awareness about the devastating consequences of industrialisation and urbanisation on forest inhabitants but also prods us to introspect on our superfluous way of living which is built on the exploitation of nature. With films like this and the highly acclaimed Bacurau (Kleber Mendonca Filho, 2019), the authoritarian ways of the current Brazilian regime are out for the world to see. We can only hope that through the global media spotlight on Brazil and increased international support, the rights of marginalised communities like the Yanomami are safeguarded and heroes like Davi Kopenawa stop receiving death threats.

The Last Forest sees its world premieres at the Berlinale in March, as part of the Panorama section. It also shows at the Tallinn Black Nights Film Festival.

Docufiction about the Kraho indigenous people of Brazil has its heart at the right place and is of great ethnographic relevance, despite a few shortcomings - on Mubi [Read More...]