He Dreams of Giants

"Dirty gem"
Two documentarists register Terry Gilliam's own Quixotic quest during the completion of The Man Who Killed Don Quixote, revealing a resolute yet fallible artist - on VoD on Monday, March 29th

This is a great movie, yet not quite enjoyable. It’s the final installment in a trilogy of documentaries directed by Keith Fulton and Louis Pepe, which started back in 1995 with The Hamster Factor (Fulton also did some behind-the-scenes filming on other Gilliam films). In that documentary, Fulton and Pepe provided a fly-on-the-wall look at the making of Terry Gilliam’s 12 Monkeys (1995). Next was Lost in La Mancha (2002), the un-making-of The Man Who Killed Don Quixote (Gilliam, 2017) which is perhaps one of the most famous documentaries about filmmaking made this century.

That film probably cursed Gilliam. Lost in La Mancha has been an albatross around his neck, given that he’s made some films since then. As Gilliam has said himself, he’s not an A-list filmmaker anymore. Instead, he keeps tilting at windmills until he actually gets a result. Actors have died on the way (John Hurt, Jean Rochefort, Heath Ledger). Gilliam told me when I interviewed him last year that Heath was of course considered for a role.

He Dreams of Giants is therefore a very difficult film to watch. It’s very funny, and it shows the mental and physical pain of trying to follow your dreams when all the odds are stacked against you. The loss of actors, issues with money (as always) – they were making it for about half of what they would have had in 2000 – and the director’s own health issues all take a toll. So many times Gilliam was asked if he was sure that he wanted to finish The Man Who Killed Don Quixote, and he always said he just needed to complete it to get it out of his life.

The differences between the three documentaries are that they are about three very different periods in Gilliam’s life as a director. With 12 Monkeys, he was at the point where he could become a big Hollywood director. He was being offered major films, and could have had a more comfortable career. Lost In La Mancha finds him still fighting without the studio system by choice, a King Lear type of story where all the elements seem to be conspiring to wreck his dream. With He Dreams of Giants, you see that Gilliam’s fight is with himself and his own mortality: He was 77 when the chance to make The Man Who Killed Don Quixote finally arrived. In the years since 2000, the film had drastically changed. The trio of documentaries is therefore a bit like a version of Michael Apted’s Up series, with a film director as the subject.

He Dreams of Giants shows a true artist who may be working on his last film. Gilliam’s last three films have not been financially successful, and at times it’s hard to watch someone who is full of life and pretty energetic struggling physically and emotionally to get this one film out of his system once and for all. He claimed: “it’s not a film, it’s a medical condition.” It’s a very honest movie. Gilliam is someone who does not censor himself, so he is not going to censor the filmmakers, even when he has to have a medical exam. 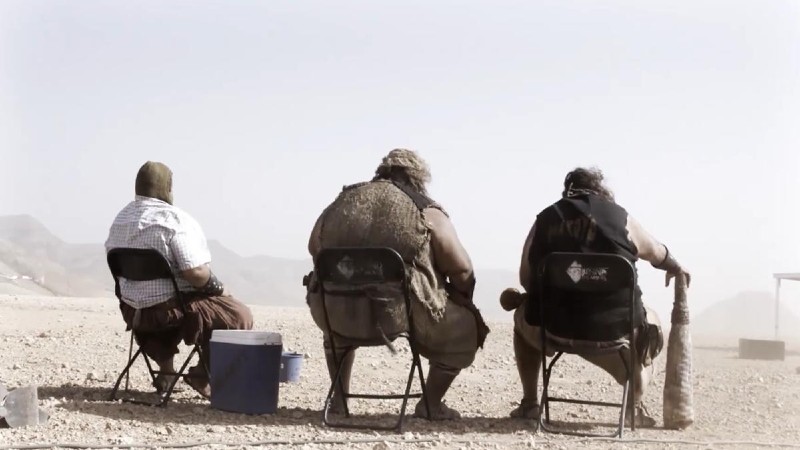 You see him working with a group of actors who are there because they want to be. You see him being his energetic self when Adam Driver shows up (if it weren’t for him, the film wouldn’t have been made). Gilliam has had to rely on generally having a lead actor who was bankable to get his films made. Jonathan Pryce is there as Quixote, who has been a close friend of Gilliam’s for years, since the director made his career with Brazil, he has always been there for him. Gilliam lucked out with Pryce, due to a lack of money for costumes is made less bad by finding out that the original costumes are still with the designer, and just about fits Pryce. They don’t have the money for special effects that they had in 2000. The film is being shot digitally – a first for Gilliam, who admits to being a bit of a Luddite – and they simply have to live with that reduced budget.

Much to Gilliam’s annoyance, there were also the legal issues with Paulo Branco in the background. Pepe and Fulton decided not to focus on those dull problems. Gilliam isn’t a person with no ego, but he probably doesn’t like the fact that the documentary was so focused on him and his struggle. He explains: “You realise you’re not who you used to be: talented, energetic and fast on his feet, that guy is long dead.” Still, that was the true story, and much more interesting than a financial conflict with an ex-producer who took him for a ride. It’s Gilliam’s own Quixotic quest.

At times, this doc is really heartbreaking, a real emotional rollercoaster, so perhaps it’s not one I’ll go back to too often. But there is plenty of on-set footage. Its central pillar is an extensive interview time with Gilliam, an attempt to get into his headspace, both personally and professionally. The result is one of the most revealing and intimate documentaries about a filmmaker you’ll ever see. The film also uses some great archive material, some of which I’d never seen.

I hope one of the reasons people like Gilliam is that he’s one of the very few filmmakers who has never really sold out, and he will do anything in his power to remain an individualist in the true sense of the word. No one else can make Terry Gilliam movies. He still has some energy left, and hopefully there will be a fourth film in the series about the making of another film of his… except maybe this time he will die on set.

He Dreams of Giants premiered at the Raindance Film Festival 2020, when this piece was originally written. It is out on all major VoD platforms on Monday, March 29th.

Ian Schultz explains why THE MAN WHO KILLED DON QUIXOTE is Terry Gilliam's best film since BRAZIL, and that it was worth crossing the Channel overnight and by bus in order to watch it! [Read More...]