Just three years ago Kleber Mendonca Filho caused a political storm back in his homeland Brazil as he – alongside the rest of his crew – held signs on the red carpet of Cannes denouncing the coup d’etat that had just taken place in the country, at the premiered of his second film Aquarius. The image was splashed on the front page of the Guardian, and many other international newspapers. This year has been no such political gesture, yet Mendonca’s third film (co-directed by Juliano Dornelles, who was previously Mendonca’s production designer) Bacurau is as politically significant the 2016 feature.

The 132-minute story takes place in the semi-arid hinterlands (the sertão) of Northeastern Brazil, in the fictitious town of Bacurau, in the directors’ home state of Pernambuco. The action takes place “a few years from now”. The film begins with an image of space, suddenly zooming into South America, revealing that Brazil is entirely dark, surrounded by well-illuminated neighbours (as if all electricity had been suddenly cut off in the largest country of Latin America). The eerie 1969 song Não Identificado plays out, in the voice of Brazilian singer Gal Costa. The lyrics talk about “making a love song in a flying saucer”. That’s a hint of what’s about to follow.

The little town of Bacurau has been erased from the map. Literally. Locals can no longer locate it on the various online applications. Someone (or something?) is killing the locals. There have been seven murders in one day. Small UFOs monitor the town from above. The locals are prepared to fight back for their survival. They also wish to protect their their identity and cultural heritage. They cherish the Bacurau Museum, a small building where town’s invaluable artifacts are stored. The local doctor Domingas (Sonia Braga) is some sort of matriarch. Men, women and children are ready to take arms. They swallow a small pill (perhaps an indigenous psychotropic drug?) in order to acquire strength for the battle . 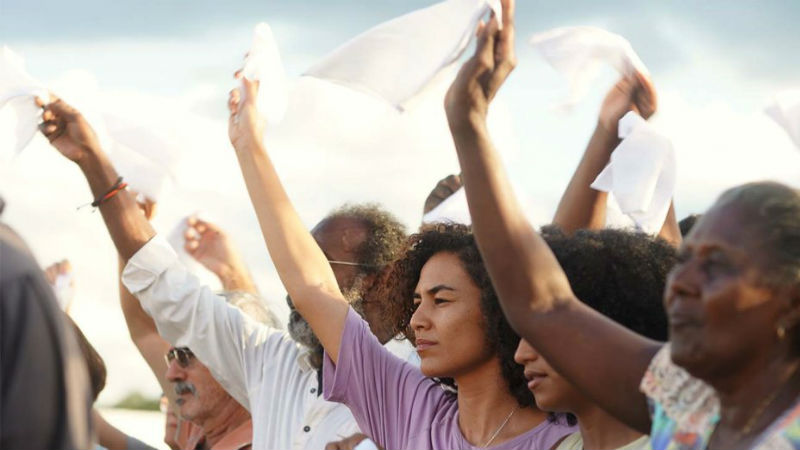 What starts out as a wacky sci-fi gradually morphs into something far more earthly. The killings are carried out by a group of American led by Michael (Udo Kier). The group leader was born in the US, but he has lived in the US for 40 years, we are told. Two sicarios from the Brazilian Southeast (a man called Joao from Sao Paulo, and a woman called Maria from Rio) go around on their motorbikes spreading terror. Michael tells Joao and Maria that they are not white, pointing to the female’s nose and mouth (a testament of her African genes). This is a commentary on American meddling in Brazilian politics and also on the cultural, social and economic divide between the Brazilian Northeast and Southeast. The latter region is more economically developed than the former, the most impoverished part of the country. Southeasterners often perceive themselves as “more European” and therefore “more developed”, a prejudice widely disseminated in Brazil, and here embodied by Joao and Maria.

The dry hinterlands of the Brazilian Northeast are the backbone of Brazilian cinema and identity. Brazilian religious leader Antônio Conselheiro famously professed: “the sertão will turn into sea, and the sea will turn into sertão”. The region was a recurring topic in Glauber Rocha’s filmography (Cinema Novo’s most famous exponent). The bandits of the 19th and 20th century (whose activity is known as cangaço, and often compared to American cowboys) became a symbol for resistance against the capitalistic system. Bacurau is a 21st century riff on the sertão and the cangaço.

It is no coincidence that Bacurau takes place a few years from now. Since the 2016 coup d’etat and the election of Bolsonaro, Brazil is experiencing a lingering fear of the near future. The extreme right-wing president has often voiced his dislike of the Northeast and any sort of social and political activism. He has expressed his desire to ban all such movements. He also has a taste for blood, is an enthusiastic advocate of torture and mass extermination. At one point in Bacurau, a television announces “public executions will begin at 14:00”. Bolsonaro is also fiercely anti-culture, having extinguished the Ministry of Culture in his first week in office. Perhaps more significantly, Bolsonaro is unabashedly and subserviently pro-US, and he favours any type of American meddling in the country. 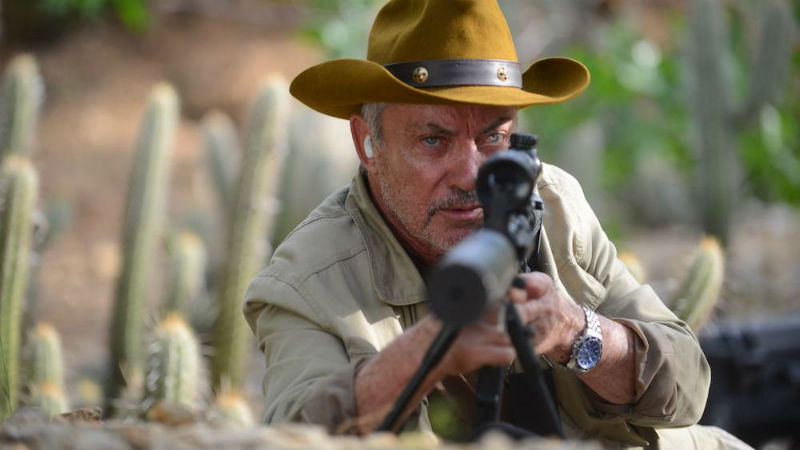 The cultural significance of Bacurau is undeniable. More than 800 people were employed during the making of the film. Images and relic from the cangaço are featured prominently at the end of the story. As are the ultra-violent killing methods and torture techniques of the cangaceiros. The second half of the film is gilded with intertext and historical references. Academics will study Bacurau for many years and decades to come.

But Bacurau is also too arcane. I’m from the Brazilian Northeast myself, and I did not grasp many of these references. There are way too many characters, red herrings, mcguffins. Sonia Braga’s role is a little awkward. The actress – who’s originally from Southeastern city of Rio de Janeiro – is indeed formidable, but her accent does not fit in well in the Northeastern region (particularly for a film that comments on the divide between the two regions). In a nutshell, Bacurau is a necessary film, yet not without faults. A manna from heaven for the Brazilian resistance against Bolsonaro’s Philistinism. Yet non-Brazilians might find it a little difficult to digest.

Bacurau showed at the 72nd Festival de Cannes, when this piece was originally written. It won the Jury Prize (es-aequo), the third highest in the prestigious event. It will see its UK premiere in October as part of the BFI London Film Festival. In cinemas Friday, March 13th (2020). On Mubi on Friday, May 27th (2022).

The Brazilian resistance speaks up!

We spoke to the two directors of Bacurau, the audacious sci-fi/Western that won the Jury Prize in Cannes this year, and became a powerful weapon against the far-right, anti-culture government of Brazil [Read More...]

In his first film, Kleber Mendonca Filho explores the dull urban cacophony that ties together middle-class neighbours in the Brazilian city of Recife - on MUBI for 30 days only! [Read More...]