Shortly after the fall of the Soviet Union in 1992, a woman returns to her native Lithuania to reclaim her family home. It has been 20 years since Viktorija (Severija Janusauskaite) fled, escaping to America where she married and began a new life. Now weary from her divorce and driven by nostalgic memories, she returns with her American-born son, Kovas (Matas Metlevski), who naively believes they’ll soon be returning to the U.S. In spite of her family’s scepticism, she trusts that Romas (Darius Gumauskas), an old friend and romantic acquaintance can help her. Their plans however are complicated when they find a poor Russian family living out of the run down estate.

We feel sympathy for Viktorija, who is compelled by the simple desire to reconnect with her heritage. She no longer wishes to remember her homeland, but wants to unite her spiritual ethnicity with the physical space. She’s a fascinating character because the home she seeks to reclaim is one she would often run away from when she was a child. The urgency of her intent however is undeniable.

Details of her younger self and relationship she shared with her parents, who were disappeared by the Soviets, are left in the dark. As to the reason she is compelled to reclaim her family estate, she offers the ambiguous insight of a sudden fear that she would never see her home again.

The director appreciates that fragments and not the complete version of a character should be onscreen. He’s content to leave it to his audience to not necessarily fill in the blanks, but to question the finer details of the persona. Is she someone who through childhood and adulthood has found it impossible to be content, to feel settled? Answers aside, what contributes to our sympathy is that she’s a victim of a life forcibly taken from her, that defines her childhood and ends her marriage.

Motherland is Viktorija’s story, but with shades of a coming-of-age drama. At the airport, Kovas sneakily buys a pornographic magazine, and his mother will later scold him when she discovers it. The drama represses the coming-of-age angle, instead local girls are framed with his sexual gaze, and he discreetly watches his mother and Romas have sex. 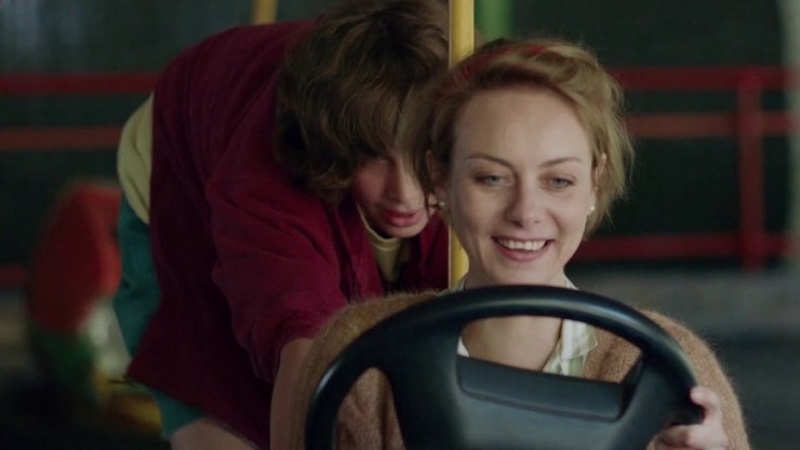 This summer is Kovas’ final breath of the innocence and simplicity of youth. He offers gum to local kids, hangs out with them as they drink and smoke, and Romas’ daughter Marija (Barbora Bareikyte) teaches him how to drive. What lies ahead of him are the complicated realities of adulthood, but this last breath is missing the joy – he knows that this will be remembered as a troubling time.

The filmmaker skilfully balances intimacy and distance by positioning us so that we don’t always see the adults meet to discuss resolving the dispute. Instead we only hear parts of what’s planned, spending time with the youngsters or observing interactions from a distance. And yet, the music creates a feeling of Viktorija’s yearning for this spiritual and spatial reconnection. It conveys her nostalgia and by casting a dreamlike impression on moments, we can sense her inner thoughts and feelings.

There’s much to like here in Vengris’ Lithuanian drama about two tragic souls who try to belong, but whose futures remain uncertain. If there’s a deeper reflection, then it’s the mistake that she tries to fix the past, failing to realise that she has resolved it by moving on and forging a new life in Boston. But the past refuses to let go of her, or is it she that will not let go of the past?

The story Viktorija remembers from her youth in her narration is a simple touch that reveals the filmmakers sensitivity. It adds a layer that impresses the merit of Motherland, effectively juxtaposing a childish fantasy with adulthood reality. It suggests that the monsters in fairy tales and a child’s imagination pale in comparison to the real hurt that people inflict on one another.

You can watch Motherland during the entire month of December (along with nine further European dirty movies) entirely for free – just click here.