"Greasy movie"
Documentary shows Donald Trump in all his magnificent repulsiveness, but unfortunately it's more an encore than a sequel to its sterling predecessor - on VoD on Tuesday, August 18th

Anthony Baxter’s first film, You’ve Been Trumped (2011), was so potent that it should have been an unofficial public service announcement during the 2016 presidential election. Its depiction of the Aberdeenshire golf club fiasco, which saw several residents – including 92-year-old Molly Forbes – have their water supply cut off, revealed Trump for what he is: a bully, a narcissist and a quasi-gangster.

Naturally, the most damning stuff occurred when the cameras merely rolled; no argument was needed, just let the man speak. One moment sees Trump off-handedly demand the destruction of a house overlooking the course, and when his colleague suggests this will be met with opposition he retorts, with that signature bitchy arrogance, “Who cares? You know what, who cares?’” Alas, much has happened in Donald Trump’s life since then, and this new film, You’ve Been Trumped Too, picks up where it left off.

An early interview segment between Baxter and Trump shows that he manages to be disagreeable before he’s even asked a question. Trump objects to his microphone clip, the ‘worst clip he’s ever seen’, and demands that Don Jr. to show Baxter what a real clip looks like, beckoning his son with a pointed finger.

Don’t feel sorry for Don Jr., though, because he’s truly a chip off the old block. In another early segment, Trump’s firstborn insists with total sincerity that the ‘little people’ were heard and at ‘great expense’, displaying an almost risible lack of self-awareness. 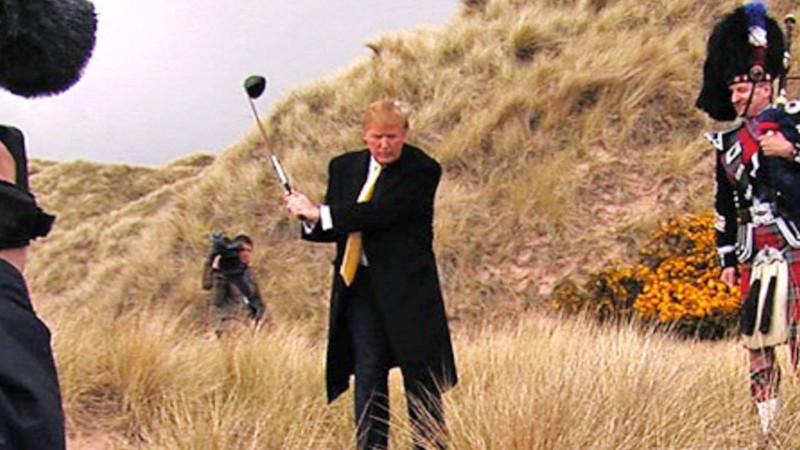 Again, Baxter does not have to probe far to capture Trump and his offspring’s dearth of personal qualities. Yet he does orchestrate several set ups to cast the thickest possible shadow over the creepy dynasty. For example, one scene that focuses on Molly Forbes’s WW2 farm service appears to be a digression, but it’s used to contrast against the Trump sons’ penchant for shooting elephants, reminding us of even further layers of villainy.

The contrasts continue. We see Molly attend a sombre church service remembering the sacrifices of the World Wars, which is followed by a Trump rally in which he ogles some naval guns and declares, “Oh, and we love the second amendment, right?” One is hard-pressed to argue with the hostility of Baxter’s portrayal, but these contrast segments and indeed the wider documentary preach to the choir; most are all too familiar with Trump’s empty, boastful rhetoric and his immature disregard for human life.

The documentary does draw a few parallels between Trump’s promises for the club and his promises for the country – such as the 6000 hotel jobs that turned out to be just 95 – but Baxter builds little upon the original story otherwise. Then there’s a travel segment that follows local man Michael Forbes to the Republican National Convention in Ohio. Perfectly watchable, but it’s also filler in a film that really shouldn’t have any at just 75 minutes long.

Ultimately, despite its virtue, this documentary is something of a You’ve Been Trumped 1.5 – an encore rather than a sequel. So for those unfamiliar with Trump’s mission to level the sand dunes of Balmedie, as well as Scottish Parliament’s spineless appeasement of him, I urge you to see Baxter’s incendiary debut feature, You’ve Been Trumped.

You’ve Been Trumped Too is available on VoD Tuesday, August 18th.