"Dirty gem"
A man attempts to reconnect with his daughter, in this all-Japanese tale of separation set against a very peculiar baby-scaring demon festivity - from San Sebastian

Oversized Oni demons shuffle through a low-ceiling hall of Japan, whilst stamping their feet and tearing hysterical children from the arms of their parents. The kids weep and wet themselves as adults look on in delight, cameraphones at the ready, sake flowing. The camera slowly pans through the terror before alighting upon one ogre, slumped dejectedly at the back of the room with a glazed expression just visible through the mask eyeholes. Squeals of demon and child alike are silenced by a jazz-inflected rendition of Japanese music, heavy on the woodblock and drum. It’s an intro that makes you sit up and take notice and the mise-en-scène conveys the tone, direction and conflict of the entire movie at a glance.

Terrorising children in the name of tradition is something we can all get on board with. It’s the goal of the namahage event described above – an ancient ritual in the town of Odo that is at risk of dying off in the modern day. We see the volunteer demons in the run-up to the event, with young and old lad alike arming themselves with straw cape, mask and, especially, booze. New father Tasuku (Taiga Nakano) has been on the sauce already and this does not mix well with the stifling get-up and feral character of the oni. He looses himself in the mask and manages to make a spectacular tit out of himself on a national platform, shaming the namahage, himself and everyone associated with his person. The specifics of the fallout are not shown but we next seek Tasuku living in Tokyo, all on his lonesome and cut off from his family for the two years since his mistake. These establishing scenes sketch a sparse life in the capital but the plot soon returns to Odo upon hearing that ex-wife Kotoke (Riho Yoshioka) has had some personal trouble.

The flavour of this tale is familiar. The homecoming of a central protagonist is practically a genre unto itself and all those grace notes are present here: returning to a childhood bedroom, butting heads against the past and old pal Shiba helping to get Tasuku back on his feet. They scrounge a living and try to reingratiate Tasuku with Kotoke and their daughter but there is a mountain of indifference to climb. The exiling has been so thorough that all contact has been lost, not even a picture of the young girl. 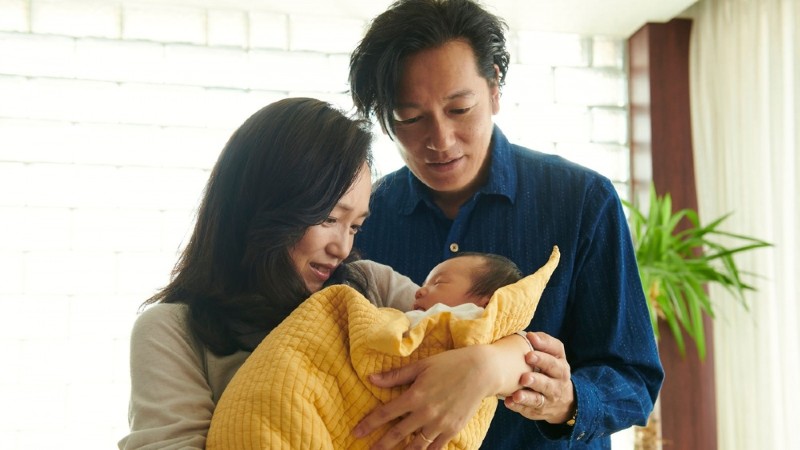 Whether this harsh degree of separation is common in Japan or due the exceptional circumstances is unclear. They’re young, as well. It’s difficult to place Tasuku’s age exactly but people mention his youth in passing and his comportment furthers the point as he plays keepy uppy with a tissue or fools around with a trolley. The friction of immaturity in honourable Japanese society is interesting in light of their ever-declining birth rate, and older figures rib the younger with requests to have more children underfoot. There’s also some light commentary on the Japanese drinking culture but this is more a seasoning than a main course.

It’s all helped along by stellar cinematography. Odo-on-sea is a small town in bleak, grey surroundings. Yet, in the hands of director Takuma Sato and cinematographer Yuta Tsukinaga there is beauty to the rocky shores and concrete port. Look out too for Oni lit in the night by flaming torches. Interiors of well organised, aesthetically pleasing Japanese homes are always a treat. Shots of wealthy businessmen enjoying themselves in hostess clubs highlight the vast difference in standing between them and Tasuku. This imagery is frequently overlaid with Yuta Orisaka’s contemporary-traditional score but beautiful sights and sounds alone are not quite enough to sustain the film. The gentle progression is much like that of the relationships on display – stilted. Apart from the dependable love of his mother (Kimiko Yo, with world weary resignation) and the open friendship with Shiba, interactions are near-passionless. Characters can take a long time to say what they mean, kind of like the film itself.

Any Crybabies Around? premiered at the San Sebastian International Film Festival: