"Greasy movie"
A husband and father reveals that he’s transgender, ripping apart his family’s concept of normality - in cinemas from Friday, October 2nd.

Much is made of a feature debut, which is seen as a significant moment for a filmmaker. For her first feature, Maylou Reymann shares a special bond with the character of Emma, as she too at the age of 11 learned that her father was transgender. The personal roots of A Perfectly Normal Family could frame it as not only personal cinema, but film and storytelling as a form of therapy. According to Reymann it’s not: “I didn’t need this film to serve as some kind of therapy – I have already done that work and I knew that working with this material wasn’t self-centred. I wasn’t doing it for me, I was telling a story that other people can hopefully identify with.”

Both documentary and narrative fiction serve the concept of truth. The rigour of documentary filmmaking focuses on the details, whereas narrative fiction can be effective at revealing the truth of experiences through emotion, thoughts, feelings and behaviour. It’s the distinction of being informed and feeling, although this is an oversimplification because a documentary compels us to respond and connect emotionally with its subjects.

What narrative dramas have is the capacity to disarm, penetrating people’s barriers or preconceptions that allow them to think or feel in the moment differently than when they otherwise might. A Perfectly Normal Family is not necessarily about creating an empathy, but nurturing an openness towards compassion and understanding. 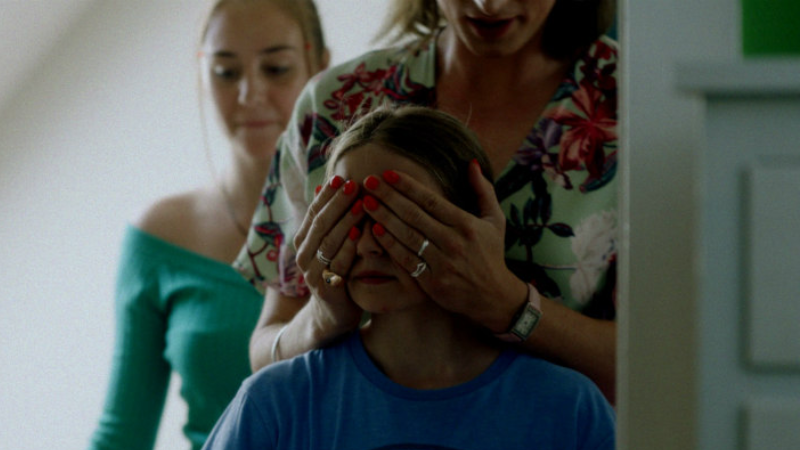 Reymann’s approach here is a muted one – she chooses to respect the internalised emotions and to not sensationalise them. The dramatic moments are tempered, ensuring that the integrity of emotions, thoughts, feelings and behaviour are not devalued. There is a narrative structure with a beginning, middle and an end, but its construction feels looser.

It’s Emma’s struggle with the revelation and the changes that follow that is the driving force of the drama. This allows Reymann to not over-intellectualise, but nestle into the emotional confusion of adolescence that affords the film an emotional emphasis. The detail is in how the characters feel, that is not always articulated, requiring us to make ourselves emotionally open. This is complimented by the cinematography that’s also a muted affair, shot simply and plainly, allowing us to feel that we are observers to genuinely intimate experiences happening before us.

The message of the film transcends transgenderism, to critique or challenge the concept of normal. The story does not seek to suggest that Caroline and Emma will never be a part of a normal family again, but that normality is diverse, just as human culture, ideas, identity and sexuality are. It transcends transgenderism by saying that experiencing what it is to be human is the purest concept of normality, and this message will be one many of us can identify with in different ways.

A Perfectly Normal Family is released in cinemas from Friday, October 2nd.

A man attempts to reconnect with his daughter, in this all-Japanese tale of separation set against a very peculiar baby-scaring demon festivity - from San Sebastian [Read More...]