"Dirty gem"
An unflinching look at the reality of advanced dementia, this British movie starring Anthony Hopkins manages to capture both the confusion of the affected and the burden of those nearest to them - on Amazon Prime on Wednesday, January 12th; also available on other platforms

If you don’t develop dementia yourself then the probability of it affecting you via a loved one is increasingly likely, if it hasn’t already happened. In the UK, 7% of over 65s are diagnosed with dementia and this rises to 13% for over 85s. Add in ever increasing lifespans and the problem is compounded – the number of afflicted in the UK is set to double by 2040 to 2% of the entire population. You can imagine the logistical and financial issues on the horizon for the government at large but if you have been lucky enough not to encounter dementia on the personal side then The Father admirably introduces the challenge.

Anthony (Anthony Hopkins) has been living alone in his spacious London flat for who knows how many decades; his partner or lack thereof is never mentioned. The cracks are starting to emerge, however. Daughter Anne (Olivia Colman) manages to check in on him most days but the time has come for some external help – if only Anthony could see it that way too. The film opens with Anne confronting Tony on his half-remembered outbursts at their new live-in nurse, accused of stealing his misplaced watch. I suspect this to be a recognisable affair for many and in other hands this film could play to its conclusion with similarly safe scenes. Indeed, the extended cast list of Mark Gatiss, Olivia Williams, Imogen Poots and Rufus Sewell, together with turgid promotional materials suggest The Father could end up as just another quintessentially British stodgefest. This is not the case. Very quickly the audience is drawn into Anthony’s delusions with a disjointed narrative and a host of other tricks that manage to display at least a modicum of how it must feel to live with the inexorable advance of dementia.

French co-writer/director Florian Zeller has been making waves in the UK theatre scene and there are some theatrical techniques brought to bear in his debut feature. Over 90% of the action takes place in the flat and spacetime itself seems to fold along with the turns of Tony’s mind, reminiscent of the scenery quick changes used to create location transitions in theatrical productions. Likewise, the positioning of his actors during dialogue scenes also evokes the space of a stage and calling to mind some moments from Three Billboards Outside Ebbing, Missouri (Martin McDonagh, 2017) from other other theatre-turned-film director Martin McDonagh. 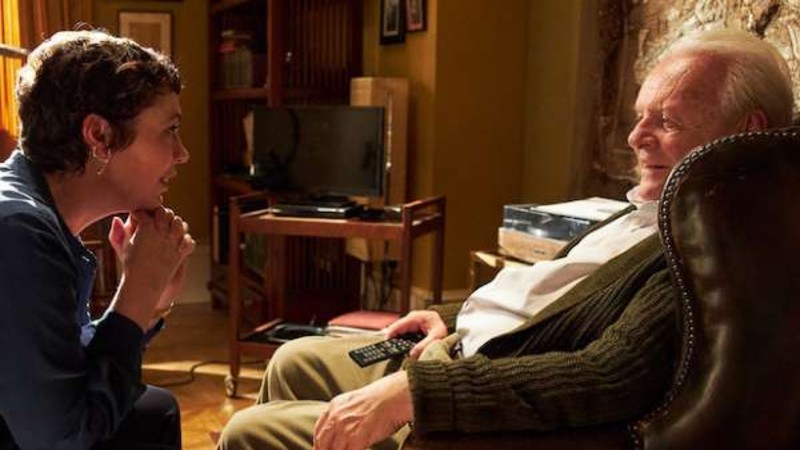 Asides from the compelling cinemacraft, Hopkins is the main draw. You sense that he is no stranger to the scourge of dementia as mannerisms and tics are extremely well observed – the anxious wringing of hands, bringing them close to the head as if to hide away from the ersatz world. The 82-year-old Welsh actor still cuts a formidable figure and outbulks any of his costars. He’s also spry, quick to explode into shenanigans in his more manic and jovial turns. These factors combine to lend a dangerous edge of potential energy to his more threatening and capricious outbursts. Conversely, it is all the more tragic when he reaches states of abject vulnerability. Colman is reliably good in her role as the long-suffering daughter who will drop everything whenever her father needs her. The anguish in hers at the crueler throwaway comments of Tony is heartbreaking. Then, the sheer delight during increasingly rare moments of sweet affection neatly captures their shared history and love, reminding the audience of why family will shoulder these burdens, if not always gladly.

It’s a bleak topic but it is a bleak reality. Genetic and lifestyle risk factors aside, neurodegeneration on the whole is almost an inevitability of our biochemical make-up of proteins and the build up of their toxic aggregates over time. Until we find therapeutic workarounds to chemically evolve past this hard-coded biological barrier, and this is not by any means assured, the public at large has to prepare for the coming storm. Still Alice (Richard Glatzer, Wash Westmoreland, 2014), Robot & Frank (Jake Schreier, 2014) and even The Notebook (Nick Cassavetes, 2004) deserve shout outs for depicting dementia on the big screen but, whilst not exactly glamourising the disease, these films play to a different tune. The Father aims for realism through dreamlike contortions of time and space – a tough balance managed capably.

The Father premiered at the San Sebastian Film Festival, when this piece was originally written. It is out in cinemas on Friday, June 11th. On Amazon Prime on Wednesday, January 12th. Also available on other platforms.

The Roads Not Taken

Javier Bardem stars as a man suffering from advanced dementia, and attempting to puzzle together the fragments of his past - now available on VoD [Read More...]

In Thailand, a carer looks after wealthy Europeans with Alzheimer's, and is left unable to care for her own family - from the Sheffield Doc Fest [Read More...]