"Dirty gem"
Talent pageant becomes a proxy of the American dream for black female adolescent, in this sweet little tale of bonding between mother and daughter - in cinemas Friday, September 25th, and on VoD the following week

Juneteenth is a holiday observed in 47 American states on June 19th. It commemorates the emancipation of the enslaved people of Texas in 1865 (the last state to do so). It is also known as “Freedom Day” and “Liberation Day”. Its significance for African-Americans cannot be understated. The date is far more than a historical holiday. It represents the a continuous struggle against an intrinsically racist system.

Turquoise Jones (Nicole Beharie) is a single mother living in Texas. She won the Miss Juneteenth pageant as a teenager. Miss Juneteenth is not a beauty competition. Girls do not strut around in bikinis. There are no princesses at sight. Instead, the empowered young women dance, sing, read out poetry, politically-charged literature or stage a performance of their choice. The winner gets a full scholarship to college. Turquoise performed Maya Angelou’s provocative poem Phenomenal Woman. Now she hopes that her 15-year-old daughter Kai Jones (Alexis Chikaeze) will follow in her footsteps by entering and winning the competition, but the adolescent is far less enthusiastic about it. 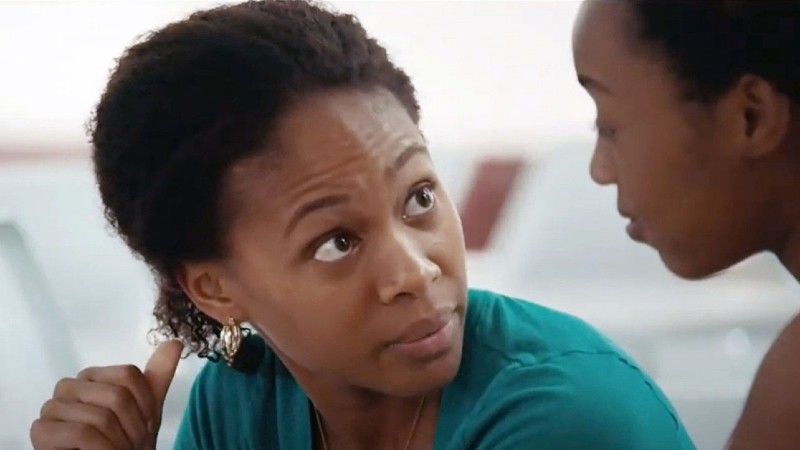 Despite winning the prestigious contest at young age, Turquoise’s life wasn’t entirely rosy. Her university education was interrupted by the birth of Kai. She had to work as a stripper in order to make ends meet, a secret that she does not wish to share with her daughter. She obtained neither a university degree nor a career, instead working at the local bar and also as a make-up artist at the mortuary. Her romantic life is hardly enviable, either. She has a sexual relationship with Kai’s father Ronnie (Kendrick Sampson), despite the two being separated. It’s little surprise that she seeks fulfilment through her intelligent and emotionally stabled daughter.

Kai eventually decides to enter the pageant, but the nature of her performance and her outfit soon become a challenge. Her careless father isn’t very supportive. Could the quiet and reserved teen pull through such a momentous performance, thereby replicating her mother’s success and fulfilling her vicarious dream? The stakes are very high.

Miss Juneteenth is a loud and proud celebration of African-American culture, a powerful venting outlet for an ethnic group consistently oppressed and denied equality. Turquoise is told: “There’s no American Dream for black folk. We gotta hold on to what we have”. And they have abundant poetry, music, dance, swagger and flare, all at full display in this delicate yet boisterous piece of filmmaking. This is also a moving tale of mother-daughter bonding at the face of adversity. Worth seeing.

Miss Juneteenth is in cinemas on Friday, September 25th. On VoD (BFI Player and other) the following week.