"Filthy genius movie"
Jóhann Jóhannsson’s first and last film as director is a sublime, haunting and meditative look at the self in an ever-changing world, narrated by Tilda Swindon's entrancing voice - out on Thursday, July 30th

The Icelandic composer of Denis Villeneuve’s Sicario (2015) and Arrival (2016), died at the age of 48 in 2018 but not before filming his adaptation of Olaf Stapledon’s science fiction novel, Last and First Men, which premiered at this year’s Berlin Film Festival. Shot on black and white 16mm film and narrated by Tilda Swinton, Jóhannsson defies the conventional sci-fi flick with his reflective look at the marriage between the human race and the supernatural.

Set two billion years into the future, Jóhannsson’s camera captures the austere and haunting Yugoslavian landscape. With the exception of Swinton’s mellow voice, no actors are present, only the natural wonders of the world as Jóhannsson’s music guides us through this 70-minute journey. The only images of colour shown are when a sonar pixel jumps and weaves to Swinton’s narration echoing the intimidating HAL computer from 2001: A Space Odyssey, minus the deadpan voice. The static shots of the gothic architecture and rock formations, coupled with Jóhannsson’s ethereal score, add a layer of mysticism to the awe-inspiring beauty of the world’s natural surroundings. 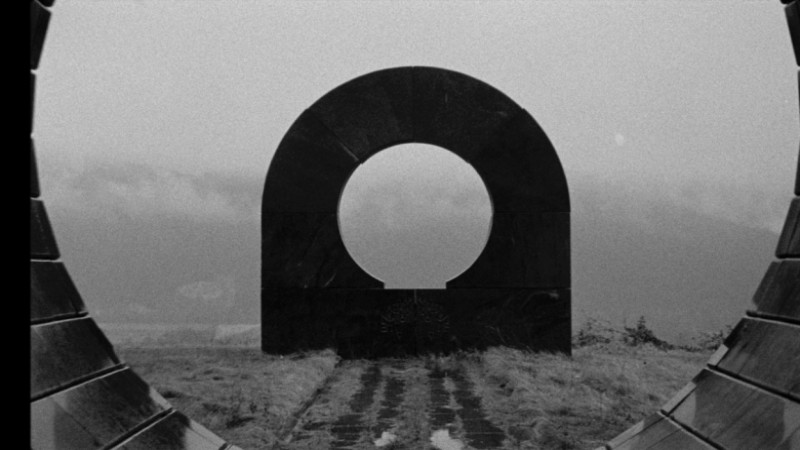 Like Jóhannsson’s white-knuckled score to Arrival, his music heightened the visual sensibilities of the placid, yet intimidating presence of rock formations that we might as well be looking at a spacecraft landing on Earth. The maternal feminine presence of the ruins reminiscent of both Georgia O’Keefe’s paintings and the German Expressionist gothic art of the Weimar Republic add emphasis the important role Mother Earth plays in preserving the planet more than its inhabitants.

Beyond the source material of Stapeldon’s novel, the film is, at its heart, a documentary. For Jóhannsson, he is attempting to answer the unsolved questions of humanity and nature before shuffling off this mortal coil called Earth. When asked about his choice for sonic arrangements in films like Sicario and Prisoners (Denis Villeneuve, 2013), Johannsson said, “That’s a slow process that happens over time, really, and I guess a lot of it is determined when I see the first image”. Through his music, we hear a soundscape of drones that evoke the sounds of the spiritually arresting Gregorian Chants of bygone millennia while his camera slowly captures the head-scratching beauty of the natural world and the never-ending, unsolved mystery of man’s presence on this planet.

Walking away from Last and First Men, I felt like I had just left a religious ceremony invigorated by the introspective nature of humanity presented on screen. I was unable to keep my head out of the clouds with wonder over whether or not Johannsson is capturing us all from that great film studio in the sky. We can only hope that he is.

First and Last Men is on BFI Player on Thursday, July 30th.