"Dirty gem"
Gemma Arterton shines in a wartime drama whose cosiness belies a revolutionary streak – on Sky Cinema and NOW on Saturday, July 31st; also on other platforms

If there is one bright spot to be had for movie lovers this year, it’s that smaller independent stories are getting the chance for a bigger platform, having an increased presence as cinemas open up with precious little new content to exhibit.

One title is Summerland, a low-budget British drama worth seeking out. Gemma Arterton stars as Alice, an abrasive writer living alone in a coastal town during World War 2. She is surprised to learn that she is the guardian of an evacuee from London named Frank (Lucas Bond). While Alice initially rejects the new arrival, the pair grow close and force her to confront the pain of her past.

The premise is nothing new: a young evacuee stays with a loner who protests at the predicament, only for the two to form a bond. It’s the stuff of numerous tea-time TV dramas, but beneath the surface is something richer. It is in the subplots and character development that this story begins to soar.

Director Jessica Swale’s script crafts a broad and interesting arc for Alice. Arterton’s portrayal of the character begins as almost spiteful, confronting the local headmaster and playing a cruel trick on a child in a sweet shop. However, the film slowly reveals why she is angry and the world, and begins to plant the seeds of change. Alice and Frank warm to each other in a very natural way, finding a common interest in Alice’s study of mythology, particularly the idea of Summerland, a coastal mirage believed to have been a vision of the afterlife. 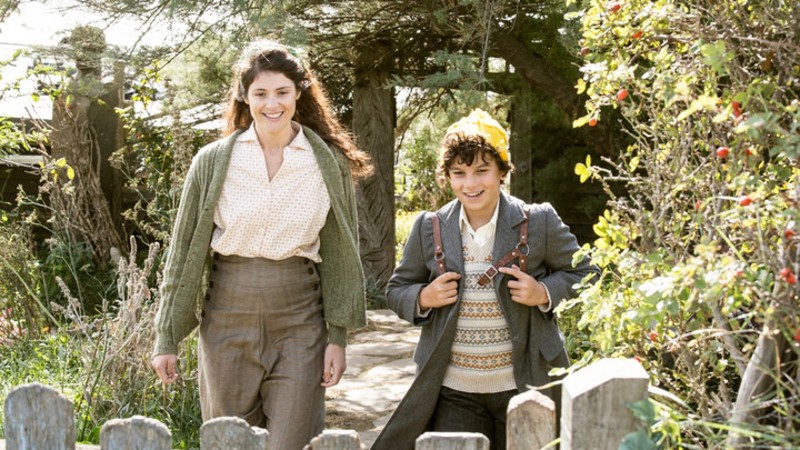 Youngster Lucas Bond is enjoyable as Frank, precocious but not in the stagey way child actors can sometimes be. He strikes up an adorable friendship with his classmate, the self-proclaimed ‘individualist’ Edie (Dixie Egerickx). It’s all quite cosy and comforting, until we begin to see into Alice’s past.

We learn that she is haunted by the memories of a past love, a woman named Vera (Gugu Mbatha-Raw) who brought out the best in her, but whose memory now only brings her pain. The flashbacks portray a tender relationship, free of the sensationalism that often accompanies queer relationships. The excellent Mbatha-Raw is a spirited counter-balance to the stern character we had seen to this point, and the pair create a believable connection with relatively little time.

Arterton reacts to each memory as if wounded, including a heart-breaking scene where Alice reveals to Frank she was once in love with another woman, and upon witnessing his innocent acceptance, gasps through tears “most people think it’s wicked”. It’s a powerful but skilfully underplayed moment by Arterton that bonds the two stars and gives her character so much more depth than expected.

The remaining cast are pleasant but mainly there to deliver news. Tom Courtenay is fun as the village headmaster, and Penelope Wilton bookends the the film as an older Alice. A third act twist stretches credulity, but somehow it works within the story’s wistful setting where characters look out toward the sea from idyllic cottages.

I want to break free! Gemma Arterton is trapped in a stultifying suburban marriage and motherhood from which she seeks a way out – now also available on VoD [Read More...]

Virginia Woolf has never been this dull and joyless before, in awful British biopic featuring a miscast Gemma Arterton and Elizabeth Debicki - now available on VoD [Read More...]

I want to break free! Gemma Arterton is trapped in a stultifying suburban marriage and motherhood from which she seeks a way out – now also available on VoD [Read More...]