"Filthy genius movie"
Forty years after it was initially released, this dirty classic has lost none of its charm, cheek or ambition - 4k restoration is in cinemas on Friday, July 31st

Flash (Sam J. Jones) is a football champion with more brawn than brains who transported to the outer rims of time and space. Liberated from the chains that trapped him on earth, Flash throws himself into the stations that release the inner hero from within him.

Mike Hodges’ great masterpiece of bawdy humour and rich, decorative opulence both celebrates and ridicules the sci-fi genre it so longingly floated over. Fitting for a film that modelled itself on the serials that dazzled children in the 1930s, Hodges turns another tent-pole by which he bases the structure of the film. The film’s farcical elements come into the fore as Flash finds himself a literal Dorothy, gazing in wordless awe at the dazzling planets that take his earthly breath away. Furthering the similarities the film-deliciously dripped in décor and droll dark humour-yearns for a time when telefoni bianchi (a genre of Italian cinema, modelled on contemporary Hollywood dramas) excited viewers with their frisson, fashion and comforting sense of bonhomie. (Prior to Hodges involvement, producer Dino De Laurentiis earmarked stylist Federico Fellini to man the picture; nonetheless, the movie flows like an Italian art piece in everything but language.)

Without question, Flash Gordon is a rocket ride that blasts through the proceedings with an almost hazardous, certainly hallucinogenic, energy. Plastered from head to toe in kitsch, kaleidoscopic insignia, the film’s camp, colourful creativity sat badly against the more earnest orbit 1977’s Star Wars: A New Hope (George Lucas) journeyed on. And yet, free from the many sequels that have proved the continuation/ruination of George Lucas’s cache, Flash Gordon holds a flavour that’s entirely its own and sits as singularly in the canon of 1980s’ sci-fi masterpieces in the same way Ridley Scott’s probing Blade Runner (1982) does. More than that, the film’s dizzying use of psychotropic colours, showy performances and incredible, metallic soulfulness were topped only by the rock score that burned behind the scorching visuals that flickered down the screen.

The soundtrack, Brian May’s creative acme as a producer, boasts Queen’s indelible stamp on an instrument they’d spent the entirety of the seventies avoiding. Without lyric to play to, synthesisers float with steely abandon, conjuring images even more detailed than the panoply of illustrated set pieces that pierce towards the viewers ever reaching eye. No less a luminary than Max Von Sydow overlooks the parading Hawkmen whose skies, planets and kingdoms they hope to re-capture. Sydow, relishing the pantomime that spits from his mouth, decorates himself in a series of extraordinary outfits, planting himself every bit the sartorial centurion for whom a galaxy would pride on. 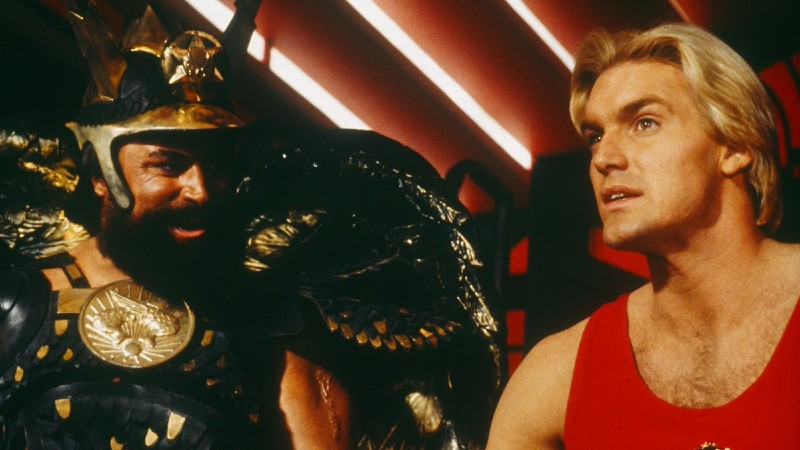 Beneath these set pieces stands Jones, all blond hair and chest pecs, every bit the 1980s’ heartthrob he never quite became. Instead, that honour went to supporting actor Timothy Dalton (the wolfish Prince Barin), who in 1987 beat out t.v. stalwarts Sam Neill and Pierce Brosnan to become the fourth actor to play James Bond. Strident in his green garment, Dalton commands the screen by virtue of his governing pose, mellifluous voice and neat, natty moustache. Dalton is brilliant, Jones fiery, but it is Brian Blessed-hairy, hoary and fiery in spirit who proves the film’s most successful scene-stealer. Blessed are the Hawkmen who follow the Yorkshire born’s baritone; buoyant is the energy that ripples through the veterans voice as he watches Barin and Flash whip each other down a deathly precipice.

Eager to capture the palettes that energised the youth that read Flash’s fantastical fairy tales for the first time, Hodges paints the scenery with a choice selection of splashy, showy colours. Shot after shot, the cinematography is rich with detail, every battle piece grander in scope than the story it follows. And yet the plot, deceptively simple, complies to the conventions of science fiction more faithfully than any of the Star Wars movies ever did. Rescued from the blandness that surrounds the earth Flash lives on, the triumph that pushes him onto the next level of escapism makes for riveting watching.

It would be reductive and restrictive to categorise this re-release as timely, but for the many watchers aching for their excitement from a world cornered by Covid-19, that’s how many will view it. Such is the nature of fairy tale storytelling, that it comes to us at times of great distress as much as it does in great contentment. So obviously dazzling is the product, that even the most hardened of Kansas farmers would fall for the majesty of the story that existed beyond the tornado that led them to their fantasy. But Flash Gordon accomplishes something even greater: not only does it make you chuckle, it also makes you smile!

The 40th anniversary 4K restoration of Flash Gordon is in cinemas on Friday, July 31st. It’s on DVD and Blu-ray in the following weeks.