"Dirty gem"
Hello, is it peace you're looking for? Aliens have landed on Earth, and Amy has to decipher their parlance and figure out their intentions, before it's too late - finally available on Netflix

This is not your average science fiction movie. Arrival delves into the difficulties of communication and, by doing so, it shifts the genre into an unusual territory. Denis Villeneuve’s adaptation from Ted Chiang’s short story “Story of Your Life” stars Amy Adams as the linguist Louise Banks, who is hired to decipher the language of extraterrestrial beings that have landed on Earth. Forest Whitaker plays US Army Colonel Weber, who proposes a list of questions Louise has to translate in order to establish whether they came in peace or not.

Amy Adams’s performance is outstanding. Her character is charismatic, clever and curious. As soon as she accepts the invitation to make contact with the aliens, Louise finds herself inside a giant standing egg about to be propelled into alien territory. Some encounters and many discoveries will follow, taking you on a journey into Louise’s personal trajectory on Earth. The film mixes scenes of her past and future, including a very clever and unexpected twist.

Louise is a very unusual, interesting type of woman. Louise balances the skills of a scientist and of a believer. She is both intelligent and sensitive. Her personality spectrum is complete, and Carl Gustav Jung would struggle to define her. According to Jung, people are either extroverts or introverts, either sensitive or intuitive, and either explain the world by thoughts or feelings. Well, you need to blend all of those in order to communicate with the aliens. Louise expresses all those types of personality. In fact, Louise uses a real linguistic theory – the Sapir-Whorf hypothesis – that suggests that the structure of a language you speak determinates how you think. 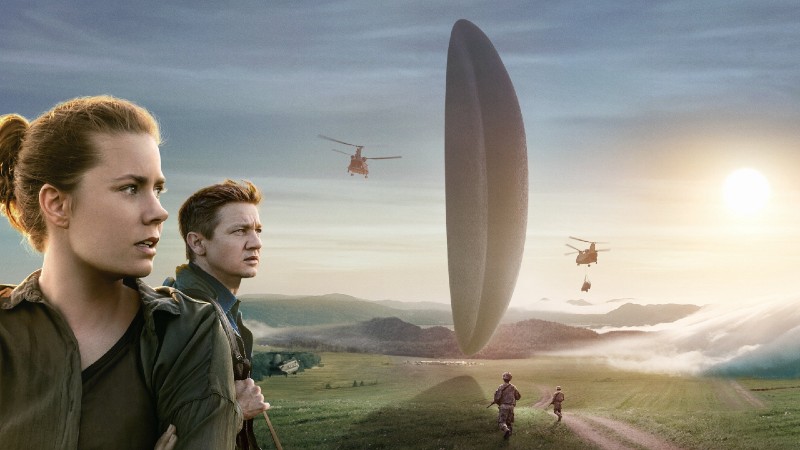 Along with mathematician Ian Donnelly (Jeremy Renner), Louise Banks must interpret the symbols and signs the aliens emit. There is also a time limit to decipher their plans. There are other UFOs on other parts of the planet, and other countries can declare war at anytime, which would have catastrophic consequences for the planet. It is necessary to share knowledge and to play along.

The film touches very deep on the topic of identity. Naming objects and people is the first step towards knowledge. If a creature has no name, it remains in a mysterious and abstract zone. That’s why we introduce ourselves once we are interested in engaging in a dialogue. And that’s exactly what Ian and Louise are trying to do. If they engage in a conversation with the aliens, then the creatures are more likely to spare their lives.

The director Denis Villeneuve gently treads on the realms of the visionary and supernatural. The photography is mostly white and blue. White is associated with light, goodness, virginity, innocence and purity, while blue symbolises trust, loyalty, wisdom, faith and confidence. Those are the essential qualities of a real interchange. There is less fear and more trust in Arrival. It echoes Jeff Nichols’ Midnight Special (2016), a film in which luminosity drives the movie narrative.

Amy Adams has been everywhere in Europe and the US promoting Arrival and Nocturnal Animals (Tom Ford, 2016) and a strong contender for an Oscar nomination, for one of those roles. Arrival was released in the UK November 10th at Odeon and Vue Cinemas. Editor Sylvain Bellemare has now won an Oscar for his work in the movie.