"Mostly clean movie"
Texas church choir director inherits her late son's drag queen club, in this all-American comedy where all problems are solved with a jolly tune - on VoD on Monday, November 16th; on Netflix on Monday, December 7th

The premise of Stage Mother must have been an easy sell – Texan church choir leader Maybelline (Jacki Weaver) travels to San Francisco for the funeral of her son Ricky, a gay drag queen from whom she was estranged for a decade. Once there, she learns she has inherited his drag club, a run down establishment with acts that are no longer bringing in the crowds. Filled with remorse for her treatment of Ricky, she resolves to get the club back on its feet with a new act inspired by her own performance experience (“different songs, same divas – and some of the same wigs”).

Maybelline would be the type of role Dolly Parton might have played years ago, Weaver’s soft accent even sounds like the country legend. With big wide eyes and catchy comebacks (“get your ass outta here before I put another hole in it”), it’s easy to get on her side even though she is introduced as the worst kind of neglectful parent.

She stands as a kind of middle ground between two heightened extremes – the conservative straights (embodied by her scowling husband who stayed in Texas), and the cackling queens. Anyone looking for innovative LGBTQ+ representation will be in for a disappointment as the gang Maybelline falls in with are very much Hollywood’s idea of what the community is. While the straight characters all have love interests at some point (Weaver has her head turned by a suave hotel concierge), gay and trans characters are there to be tragedies that Maybelline can piece back together, solving drug addiction and domestic abuse with some homespun wisdom. 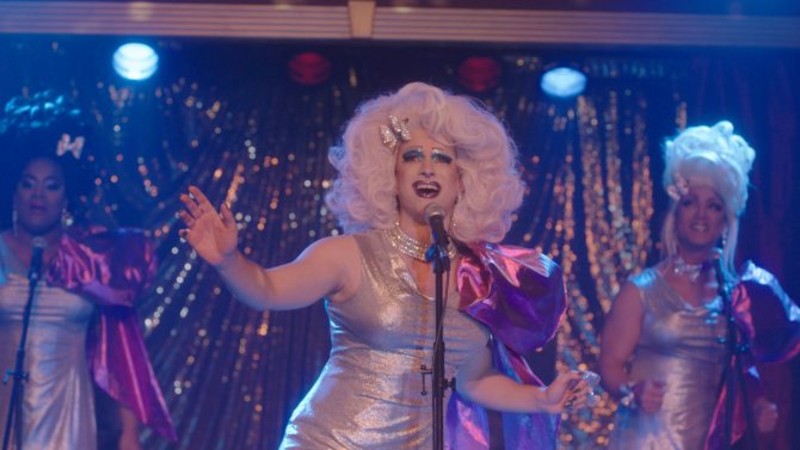 It’s never clear why a character so open-minded could have possibly treated her offspring so badly. We see nothing of the dark side of that relationship, only the repentance. Then again, it’s that kind of movie, where the worst kind of problems get treated with a cry and a sing-a-long. It’s an idealised world that wraps you up in easy solutions, and good humour. The film becomes a comforting let’s-put-on-a-show dramedy, where everyone pitches in to turn the club’s fortunes around, and learns a little something on the way.

Weaver enjoys a sharp back-and-forth with Adrien Grenier as her son’s partner, the only character who really holds her to account for anything. Eventually that tension thaws, but not before it gives us some delicious one liners (when Grenier accuses her of storming out of the funeral, Weaver snaps back “I don’t storm, I flounce”). Lucy Liu is great fun as Ricky’s best friend, a sassy single mother who is the first to welcome Maybelline into their world. Fans of the film Tangerine (Sean Baker, 2015) will be happy to see Mya Taylor as one of the club’s performers. While the role may be slight, she adds some heart to her scenes.

Stage Mother is in cinemas on Friday, July 24th. On VoD on Monday, November 16th. On Netflix on Monday, December 7th.