"Filthy genius movie"
The loudest, messiest, filthiest and yet most touching and impressive Christmas present you could ever give to anyone; 2015 film shot on iPhone excels in humour, simplicity, compassion and humanity - on Amazon Prime on Sunday, May 2nd

The letter “X” has at least three very different connotations. It represents the unknown, as in “X-factor”, it can also signify the profane (“X-rated”), but it can also mean holy (the “X” in “Xmas” comes from the Greek letter Chi, the first one in the name of the Lord Jesus Christ). But never before you have seen the three meanings combined in one: Tangerine is full of secrets, it’s sacred and it’s profane, all at once and on Christmas Eve.

Entirely set on Christmas Eve, this micro-budget movie sounds like the antipode of the snowy, Christian and holy holiday. It is set in the sunny and tawny-hued streets of Los Angeles, its protagonists are transgender sex workers and there is ardent commotion throughout most of the movie. Yet this is one of the most poignant Christmas movies that you will see in your life, urgent in its candour and integrity. This is sobering holiday entertainment, as it rescues humanity from the most unlikely places and situations: a lonely performance in an empty club, a blow-job in a car wash, a transphobic attack, a wig soaked with urine.

Transsexual prostitute Sin-Dee Rella (Kitana Kiki Rodriguez) has just finished a 28-day prison sentence when she meets her colleague Alexandra (Mya Taylor) in a donut shop in a mundane and soulless street of Hollywood. She reveals that Sin Dee’s boyfriend and pimp Chester is cheating on her with a woman called Dinah. Sin-Dee begans a frantic search for her man and his alleged dalliance. We are taken on a journey of Las Angeles underworld, replete with wigs, high heels, brothels, drugs and, but also bubbling with fervent love, desire and friendship. 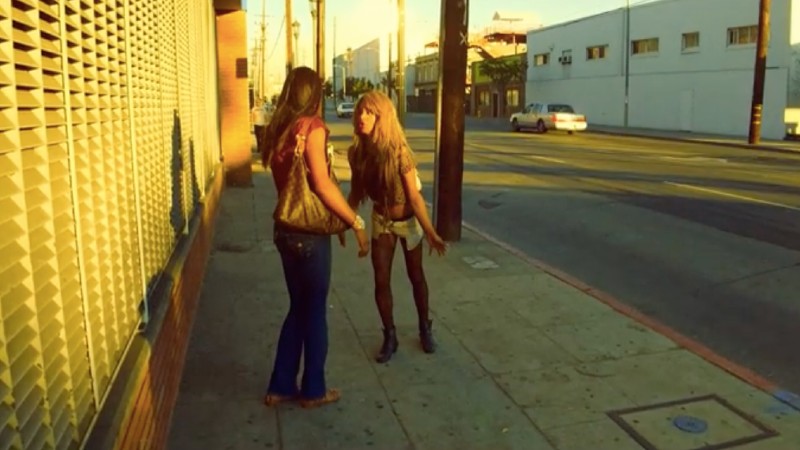 Armenian cab driver Razmik has befriended Sin-Dee and Alexandra, and developed a trusting relationship with latter. He is determined to have sex this Christmas eve, but he ejects a prostitute from his car upon finding out that she is cisgender. It’s his good friend Alexandra instead who pleases the man before he heads home for a Christmas meal with his conservative family. But something goes awry when Razmik intrusive mother-in-law stalks him after dinner, and this is when the underground and the mainstream worlds collide, the result is a hilarious and colourful culture shock explosion.

Tangerine is masterpiece not just because it was entirely shot on an iPhone 5s and uses non-profissional actors in their chosen skin (a more mainstream Hollywood film would’ve opted for cis females for the transgender roles, in gesture compatible to blackfacing). The film excels because underneath the lipstick and the wigs there’s abundant warmth and kindness, which comes out in very awkward yet genuine deeds. They include sharing a pipe of crystal meth, attending a lonely club performance (it turns out Alexandra paid the club to sing) and the very last moment of the film, which will leave you speechless in its puerile gentleness. At first Sin-Dee and Alexandra seemed fiercily manipulative and individualistic, but it in the end it is the spirit of Christmas that prevails!

Few films epitomise dirt and the TP factor as accurately as Tangerine does. For DMovies, this is the ultimate Christmas movie, complete with with very subversive angels and a beautifully transgressive message of hope.

You can buy Tangerine on DVD and Blu-ray at your closest mall or music shop. This is the first time it available for purchase at Christmas. You can buy online by clicking here.

Don’t for get to watch the hilarious film trailer below: