"Filthy genius movie"
An ageing drag queen dying of cancer with weeks to live takes a younger, new kid on the block under his wing - British film dealing with gender fluidity and death is now available on Netflix!

Are you straight? So is spaghetti – ‘til it gets hot and sticky.

What’s the difference between your wife and your job? After five years, your job will still suck.

These are but two of the dirty jokes in the small club stage repertoire of ageing drag queen Jackie (Derren Nesbitt), 74. He performs in a huge black beehive wig, he drives home without it, in his kitchen he collapses on the floor. His doctor (Ruben Crow) later tells him he has an aggressive form of cancer and only six to seven weeks left to live.

Another night. His manager Alex (Joss Porter) asks Jackie to show the ropes to a new performer Faith (Jordan Stephens), 21, so called “because everyone needs a bit of Faith in their lives, darling”. The pair of them get knocked down in an altercation with three queen-bashing men in the alleyway outside the club. When Jackie later discovers Faith is homeless and sleeping in his car, he offers the boy a place to stay. All above board and nothing untoward going on (Jackie later allays Alex’s fears he and the boy might be having sex). 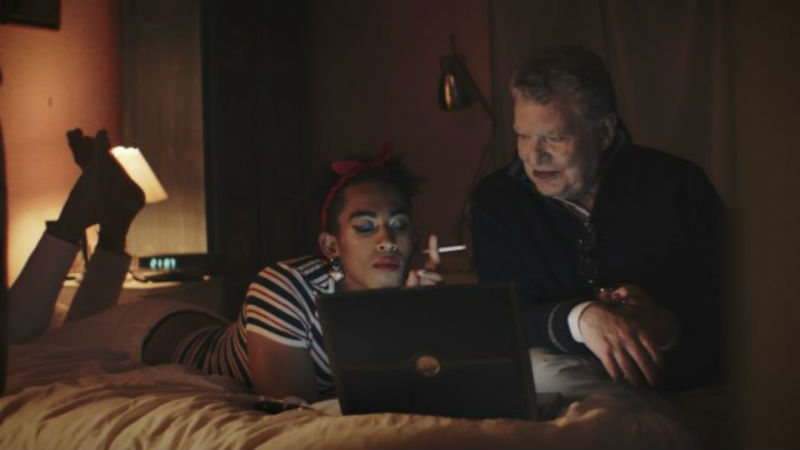 Pictures of a girl in Jackie’s flat spark Faith into a conversation about Jackie’s daughter Lily to whom Jackie hasn’t spoken for 10 years. Jackie likes dressing in women’s clothes but also likes women: Faith is outrageously gay and shocked to find Jackie isn’t. Faith thinks Jackie should tell his daughter that he’s dying. Faith introduces Jackie to Facebook so he can find the estranged Lily and re-establish contact with her. But there’s a problem: Jackie fell out badly with his wife/Jackie’s mother when she inadvertently came home one day to find him dancing round the house in her wedding dress – and when she died, he skipped the funeral believing he wasn’t wanted there.

In the end, it falls to Faith to track down daughter Lily (April Pearson) because Jackie isn’t too skilled with computers. Faith wishes to enable the pair to attempt their difficult-seeming reconciliation. In the meantime, Faith helps Jackie with his bucket list – a lap dance with a 20-something girl in a strip joint (a charming turn by Lucy Jane Quinlan), a chest tattoo, a near disastrous visit to a drugs dealer (an hilarious, single scene Steve Oram) in a block of flats. 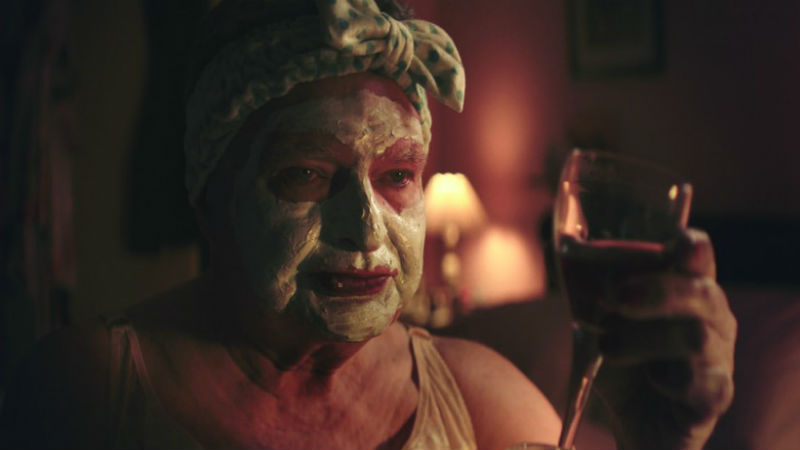 There have been many British films earnestly trying to deal with issues of gender identity and a lot of them are terrible. This one breaks the mould. It’s beautifully conceived and written by its director Jamie Patterson and superbly cast, the bit parts not only with obvious star turn Oram but also comparative unknowns like Crow, Pearson, Porter and Quinlan, the two lead roles with rising singing star Stephens (who also gets one number on the soundtrack) and octogenarian Nesbitt, hitherto best-known as the Gestapo officer in Where Eagles Dare (Brian G. Hutton, 1968).

The film commendably avoids cliché and grapples not so much with gender issues, which it takes in its stride, but more with death and dying – and what really matters about our lives in the end when we’re gone. This is a tiny movie with a near no-budget advertising campaign, so you’re unlikely to hear about it via the usual channels and probably won’t see it unless you seek it out. Please do so, though, because it’s well worth the effort and exceeds all expectations. Plus, it’s periodically peppered with numerous memorable, two-line, question-and-answer style dirty jokes. It’s not a comedy, yet it’s very funny in places. And heartfelt and genuinely probing in others. Don’t miss.

The gay Ballad of Narayama? Gay Americans living with HIV move to the desert as they get older, where they calmly wait for their deaths, seek spiritual healing and community support [Read More...]