Behind Herzog’s Homeric body of work, many of his films are tied by a singular, solid theme. It’s family. This tale brings it one step closer, by opening on a young girl accosted by man claiming to be her father. She stares pensively, apprehensively and curiously, trying to connect this man’s face to the parent who left her at a very young age.

But of course he isn’t. He works for Family Romance LLC, an agency that hires actors to pose as surrogate fathers. He’s been instructed to twitch his eyes, a habit his subject practised continuously, as he brings Mahiro (Tanimoto Mahiro) on a shared boat ride. And this is where the interesting dichotomy comes in.

Though entirely based on a lie, Herzog films the dialogue with as much truth as he can. There, he and his camera find meaning, choice and actions behind the supposed father and daughter activities. With these two as our guides, we see a Japanese commune cherishing their daily activities. It’s a glorious travelogue, heralded by two unlikely people.

It’s less Wrath of God (1972) as it is Wrath of Father.Our lead finds himself more and more comfortable in his position of parental liar. Yet he too falls under his duplicitous weight. In one of the film’s more revealing moments, he confides to an unhappy wife about the weight of his uncontrollable burden. She leaves, he pines and the camera turns to a display of statued foxes, each one looking evasively at the camera. The film’s tonal message is one of spirited reasoning: Those who live, lie. Those who stand back, judge. 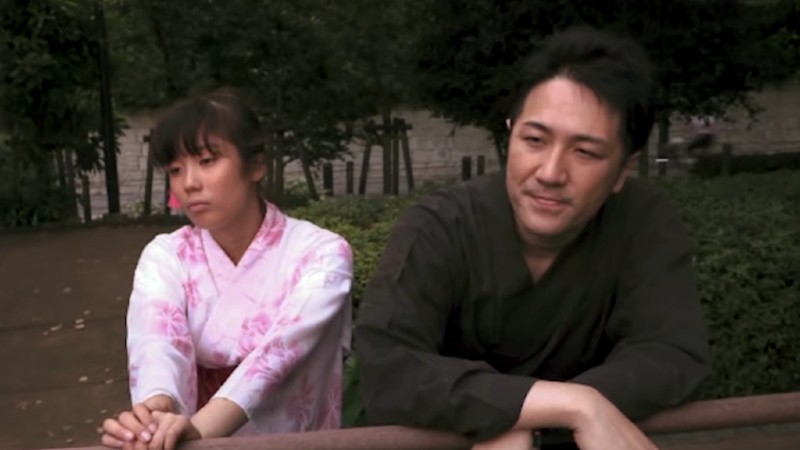 Much more impressive than the characters are the visuals. Between scenes, the film focuses on the exquisite Japanese landscapes, as helicopter shots and wide angles decorate the beauteous countryside. Where there’s purity, there’s foul-play, not least when Mahiro convinces her “father” to bring a young girl she’s just met for a walk. Taking pity on the bullied child, the pair bring her on a stroll through the park. The child’s parents? What is a parent, anyway?

He brings both girls to a multistory building, bonding to their particular needs. When Mahiro asks him for a hug, he takes his eye off the little girl hanging from a glass window. In one endangered shot, he’s proven why he shouldn’t be a father by anyone’s definition of the word.

Yet there’s love. He hugs Mahiro, starved of affection, when she asks him too. He speaks to the birds, as anyone who loves the feathered animals would. And his intentions, more than ambitions, are at least in the right place. Through the film he seeks for truth, finding it in the eyes of a girl. Herzog’s family might be dysfunctional, but they’re never anything less than charming.

Family Romance, LLC. is out on VoD on Friday, July 3rd.

The 88-year-old former politician and last leader of the Soviet Union opens up his heart and shares his achievements, tragedies and pains with German director Werner Herzog - now available on VoD [Read More...]

Loving the alien. Again. Japanese director reshapes his earlier Before We Vanish into an effective drama which plays out as an edge of the seat, sci-fi alien invasion thriller - from the London East Asia Film Festival (LEAFF), on now [Read More...]