The Girl With a Bracelet (La Fille au Bracelet)

"Greasy movie"
A teenager is on trial for murdering her best friend in Stéphane Demoustier’s compelling but enigmatic drama - on Curzon Home Cinema from Friday, June 26th.

Sixteen year-old Lise (Melissa Guers) is accused of murdering her best friend. From afar we watch a family on the beach, the scene a carefree one until a man dressed in black enters the frame, followed by a police officer in uniform. The picturesque scene is immediately transformed, and soon afterwards the daughter of the family comes closer, leaving the beach in police custody.

We do not hear the voices of the officers or the father from our vantage point, offering us no explanation, except that we can infer that the girl has found herself in trouble. But she’s young, aged around sixteen-years-old, so it’s likely a silly adolescent mistake. But we don’t know, and director Stéphane Demoustier has no interest in sharing this vital piece of information that sets the stage for his courtroom drama.

This is not a pedantic description of what you will see, but an acknowledgment that Demoustier, uses this opening sequence as a visual anticipation of the films narrative.

In the early pre-trial scenes, Lise is a character who we know seldom anything about. The drama paints an image of a young woman, whose friendships have become complicated by emotion and sexual experimentation. While we may think we come to know Lise, we can never feel secure in the impression we have. 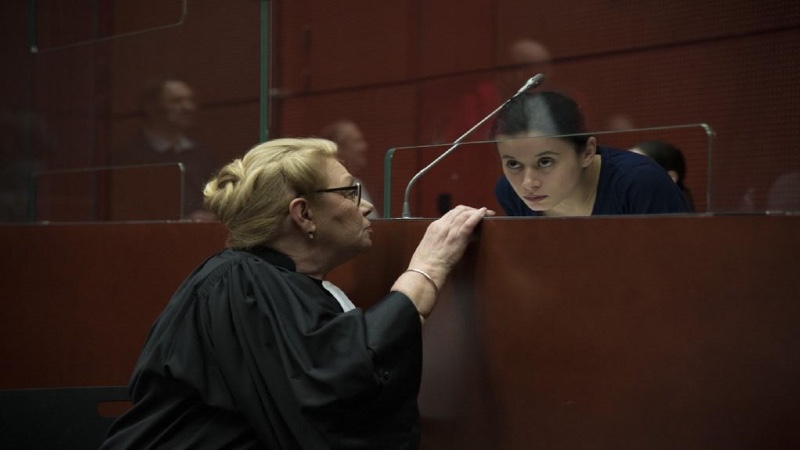 It becomes difficult to decide if Lise is guilty or innocent. She answers questions and volunteers testimony in court with a demeanour, and in a tone that is matter of fact. We are left to wonder about her emotional detachment, and whether her coldness is a sign of guilt? She contradicts the impression we form of her – there are moments she seems emotionally detached, and then the opposite seems true. She never comes across as cruel, just emotionally numb, and her lack of emotive expression conceals her humane pulse. Or is she a methodical killer, and moments of emotion are manipulative ploys? Guers commits to screen a captivating performance as Lise, a character all the more compelling for the uncertain and awkward position she places us in. While we feel sympathy for her, we never know if we are sympathising with a killer.

The Girl With a Bracelet is an exercise in creating compelling drama out of a detached coldness. It’s not possible to separate the soul of the film from that of Lise. A courtroom drama, we would rightly suppose the films preoccupation is to decide whether she is guilty or innocent. Demoustier honours this narrative arc, but in as much as the defendant is on trial, so to is the judgemental nature of society.

As the drama progresses, it becomes clear that Lise is not only on trial for murder – her personality and her sexual attitudes are under scrutiny. During the trial, the prosecutor expresses bewilderment at Lise’s apparent ability to separate emotion from the sexual act with a male witness (Nathan), and asks provocatively, “Would you say you’re what is known as ‘easy?’” Lise replies, “Why not ask Nathan if he is ‘easy’ too?” Her attorney in her closing arguments states, “…Lise Bataille would not be in the dock today if she had not shown the freedom of morals, however commonplace, on which the public prosecutor has dwelt so insistently. However much it may offend some, one can be 16 and have a sex life, be 16 and have a desire to live and laugh. Both have been stolen from Lise Bataille.” The question becomes who is the victim, and is there more than one in this trial? Sex becomes a moral litmus test as Demoustier introduces themes that touch upon patriarchal prejudice, and oppression and victimisation through social mores – the role of the female prosecutor makes for an interesting intellectual analysis.

The film is an enigmatic work, its restrained aesthetic, the cinematography and editing, sparse music effectively mirrors Lise’s coldness. Demoustier creates a compelling drama, and the exchanges in the trial are absorbing. In place of words or conversation outside of the court, characters are developed through observation, or in the case of the mother, her absence. There is effortlessness in the characterisation, which carries across to the ideas and themes, that emerge through the testimonies in court.

The opening wide shot presents the unfolding confrontation, but also the contradiction at the heart of the film. In as much as we come to intimately know the characters, there remains that distance. As the credits roll, we are left to question how we feel about Lise, because in that lies the answer to the question whether she’s innocent or guilty, that we must answer for ourselves.

The Girl With a Bracelet is streaming on Curzon Home Cinema from Friday, June 26th.

In this Dutch horror classic, a man searches frantically and obsessively for his girlfriend after she mysteriously disappears - now on VoD, DVD and Blu-ray [Read More...]