"Greasy movie"
A woman visits a library in search of letters written by her grandmother, in a curious movie that forces viewers to seek clarity in an ocean of ambiguity - streaming on Mubi now

Sofia Bohdanowicz’s MS Slavic 7, co-directed with actress Deragh Campbell is a delightfully charming drama, coming in at a brief 65 minutes. Campbell plays Audrey Benac, literary executor to her great-grandmother, Zofia Bohdanowiczowa’s estate. She travels to the Houghton Library at Harvard University, where she discovers letters written between 1957 and 1964 to Jósef Wittlin, a fellow Polish poet living in New York City. Coming up against her aunt’s disapproval as well as other complications, as Audrey digs into her great-grandmother’s intimate past, she faces her own troubled present.

Zoifa who first writes from her home in Wales, UK, before she moves to Toronto, Canada, bridges a physical and emotional distance, as she conveys to Jósef how he vital he has become for her. Meanwhile, Audrey bridges the past and present, which along with the choice to merge drama and documentary in favour of a dramatic narrative aesthetic, permits the look and the story to complement one another. This does not quantify its merit, rather it’s merely a pleasant observation of parallels.

MS Slavic 7 is not escapist cinema, it is the antithesis of bloated commercial cinema. From its terse running time to its sparse aesthetic, the film asks the audience to look, rather than presenting an entertaining and passively engaging spectacle. Yet it’s not altogether different from commercial cinema and the Marvel films. It too is about whether we enjoy spending time with Audrey, just as we get caught up in the drama and the heroics of the characters in commercial cinema.

A silence runs through the film, a portrait of Audrey with a lack of detail expressed. Repeat viewings will allow for a closer excavation of the connections between the words of Zofia and Audrey herself, an insight restricted on a first viewing. MS Slavic 7 is the type of film that requires you to have to mind a question to keep your focus, because while it’s a film that presents Zofia as the subject through her correspondence with Wittlin, the necessary question is in what ways do the words convey who Audrey is?

Zofia, her words and relationship with Wittlin should not be taken as a thorough reflection of Audrey, only a fractional one. Like her great-grandmother, Audrey casts an impression of being an outsider. Both are displaced, but in a wholly different context, because while one was displaced through the violence and atrocities of the Second World War, the other’s displacement is unlikely rooted in such extreme trauma. Whereas Zofia seems to connect and form relationships, this seems to be a struggle for Audrey. She interacts with family, albeit these interactions are not seen outside of her seated at a family gathering or the tense interactions with her aunt. 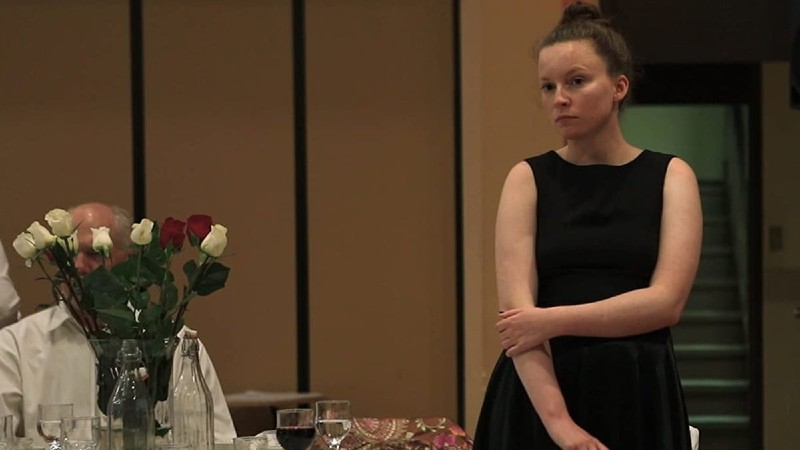 In the intimate postcoital scene where Audrey lies in bed, distanced from her momentary lover played by Aaron Danby, who has helped her translate the letters, the pair cover themselves with the bedsheet. There is an unmistakable coldness that is offset by the intimate readings of two pieces of Zofia’s writing. When it’s Audrey’s turn to read a piece and she does not register his kisses upon her back, the artificial intimacy of the scene is clear. The distance presents Audrey as not necessarily a cold or matter of fact person, albeit she does seem most alive in the film when functioning in an intellectual and thoughtful capacity. One can sense an unspoken emotion, of possibly pain or a person who is yet to find her place in the world.

Audrey is a mysterious character that lives out of the past and distances herself from her own present. Without having seen Bohdanowicz’s Never Eat Alone (2016) and Veslemøy’s Song (2018), in which Campbell plays Audrey, it’s preferable to stay non-committal about the character, of which MS Slavic 7 is only one piece of a larger portrait. And aside from its mysterious young woman, there is an appeal in the abstract impression we have of Zofia and Jósef’s relationship, that is forged through the written language only, that contradicts film as a visual form.

Bohdanowicz and Campbell’s film is one we must appreciate as a series of moments, from Audrey defending her right to manage the literary estate of her great-grandmother, the author’s ideas over structure and grammar, and of people connecting physically, emotionally and intellectually through words. MS Slavic 7 is blessed with moments that make it an intriguing work that is both intimate and distant. It’s a curious work that requires for us to look, and search for clarity in its ambiguity. While appealing to only a limited audience, the film should appeal to those who appreciate letters and the written language, who will be willing to look beyond what is seen, to discover the reality behind the words, gestures and interactions.

MS Slavic 7 is available on Mubi from Monday, June 8th.

In this Dutch horror classic, a man searches frantically and obsessively for his girlfriend after she mysteriously disappears - now on VoD, DVD and Blu-ray [Read More...]